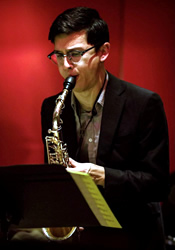 Since arriving in New York City in 2013, Adam Hutcheson has been privileged to share the bandstand with some of the most in demand musicians on the jazz scene including George Colligan, Victor Lewis, Mike Clark, Duane Eubanks, Ed Howard, Glenn Zaleski, Jay Leonhart, and Leon Lee Dorsey. He has performed in some of the city’s staple venues such as the Apollo Theater, 55 Bar, Fat Cat, and most notably at Jazz at Kitano, where he served as the house saxophonist for the club’s Emerging Artist Series. Internationally, Adam has played in jazz festivals and clubs in Ireland, London, Amsterdam, Japan, and South Korea with highlight performances at the Cork Guinness Jazz Festival (Cork, Ireland) and Bulls Head Jazz Club (London, UK). He can be heard on numerous recordings as a sideman and has released two albums as a leader. In September 2020, Adam was awarded 1st place in the jazz category of the Unsigned Only International Music Competition for his original composition entitled “Souperbass,” which can be heard on his latest release (Vol. 1 by AH2).

Adam earned his B.M. and M.M. in Jazz Saxophone Performance from the University of North Texas where he played lead alto in the Grammy-nominated One O’Clock Lab Band, taught jazz saxophone lessons, and was the recipient of multiple Downbeat Magazine student awards. His primary teachers were Brad Leali, Jim Riggs, and Eric Nestler. While living in Texas, he was also named a finalist in the North American Saxophone Alliance 2010 and 2012 jazz saxophone competitions.

Adam has been actively teaching since 2009 where he has enjoyed maintaining a studio of both in-person and online saxophone students. He is an active clinician and has been on the faculty of the Plano Jazz Invitational (Plano, TX) since 2018, as well as having previously taught at the summer jazz camps at the University of North Texas. Adam is a Conn-Selmer endorsing artist and plays Yanagisawa saxophones.