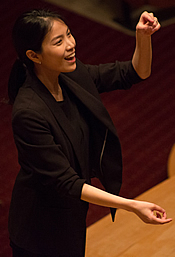 An enthusiastic conductor JaeEun Kim has been praised for her “graceful” gestural vocabulary and “well-planned, prepared and conducted” rehearsal. Kim has been appointed to direct a variety of choirs and orchestras throughout the United States, India and Korea.

She has joined the music faculty at Skidmore College as Director of Skidmore Chorus and Vocal Chamber Ensemble in Fall 2018. Before coming to Skidmore, she assumed the position of Director of Choirs at Northwestern College, where she conducted A cappella Choir and Heritage singers, and taught conducting, choral literature, music history and music appreciation. Additionally, she has worked with nine different types of choirs of varying levels at the Indiana University, where she also taught music courses as an Associate Instructor both in choral conducting and music theory. In 2016, she made her debut as opera chorus master, after participating in several of IU Opera productions as assistant chorus master, including The Last Savage, Così fan tutte, Cendrillon, H.M.S. Pinafore and South Pacific.