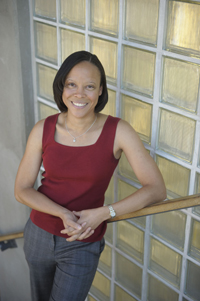 Skidmore's new Intergroup Relations (IGR) minor positions the College as a leader and model in the study of race, racism, and racial identity in the U.S, according to Kristie Ford, program director.

The minor, approved last spring by the College's Curriculum Committee, will be available to students beginning this fall. "As far as we know, we're the first college in the country to offer an IGR minor," said Ford, associate professor of sociology and inaugural director of IGR at Skidmore. She explained that a number of schools offer intergroup relations as co-curricular events, through certificate programs, or via specific courses, but not as part of a formal minor program of study. The curricular framework gives the minor legitimacy, she added.

Intergroup relations was a key element of the dialogue movement launched at the University of Michigan, where Ford earned master's and doctoral degrees.

The IGR minor grew out of Skidmore's award-winning IGR program, a collaborative initiative involving faculty, staff, administrators, and students. The multi-component program had team members participate in teaching, coaching student facilitators, and organizing curricular and co-curricular events on and off campus. In 2009 Skidmore was the first Capital District college to receive an award from the regional Council on Inclusion, whose membership included key administrators at area colleges and universities who were responsible for diversity and multicultural affairs at their schools. Skidmore was cited for hands-on participation in social justice education and efforts toward influencing and sustaining positive change at the college or in the community.

Many elements of the former IGR program have been incorporated into the new IGR minor. Among these are a foundation course in sociology titled "Race and Power," taught by Ford, and a training course, "Racial Identities: Theory and Praxis," which will be co-taught in the next academic year by Sarah Goodwin, professor of English, and Rub n Graciani, associate professor of dance.

In addition, there will be intergroup/intragroup dialogues on race, facilitated by pairs of students who have successfully completed the Racial Identity training course. In the dialogues, which offer two academic credits, faculty coaches work closely with the student facilitators and are responsible for grading all student work. Each dialogue section has a specific focus: People of Color/White People, White Racial Identity, and Multiracial Identity.

Two courses covering theory and practice of facilitating dialogues form the minor's capstone element. One elective from a select list of courses completes the 18-credit minor.

Ford describes the intergroup dialogues as "a social justice framework where the focus is on how students utilize what they learn to create change." It is non-partisan and non-political, she added.

"I see this filling a necessary gap in the curriculum," said Ford. "It is cutting edge and is a path that many institutions are following. It requires an intentional teaching strategy to effectively and purposefully engage across identities," she added.

Response to the courses has been positive. "Students have been our biggest supporters and allies in developing this minor," reported Ford. "Their interest brought us to this point." Last year there were more than 50 students on the wait list for IGR dialogue courses, which are limited to 10 students and two facilitators per section.

Qualitative and quantitative data collected since 2008 suggest that Skidmore students have grown in their understanding of race identities and have sustained their knowledge. National assessments have determined that students not only have increased their understanding of attitudes and behaviors centering on race but also are more apt to challenge comments that they do not agree with and to work to change the behaviors of others, as well as their own attitudes and behaviors.

Theoretically, an IGR minor could be combined with any of Skidmore's approximately 60 major degree programs, but Ford sees a natural fit with such disciplines as sociology, psychology, social work, education studies, and American studies. She points out, "It leads to the acquisition of a set of transferrable skills, and students can cut across boundaries with these skills. There has been interest among business majors as well as science and math majors," she said.

She will work with colleagues on ways to help students apply the skill set to employment opportunities. In the future, there may be an additional course created to enable seniors completing the minor to merge their theoretical knowledge and practical skills with post-college career options.

A long-term goal is to expand the dialogues to focus on social identities other than race, such as gender, religion, or nationality.

Skidmore presents StartUp Skidmore
The Feb. 17-19 workshop and competition — open to all Skidmore students from all majors — will enable participants to fine-tune their business pitches and develop a prototype for their own creative products and ideas.
END_OF_DOCUMENT_TOKEN_TO_BE_REPLACED
Jan 20 2023

Four seasons of Skidmore: 2022 in review
2022 saw the return of many beloved traditions to campus and marked the start of a yearlong celebration of the College’s Centennial, giving us all reason to pause and reflect on Skidmore’s past, present, and future.
END_OF_DOCUMENT_TOKEN_TO_BE_REPLACED
Dec 15 2022
More News