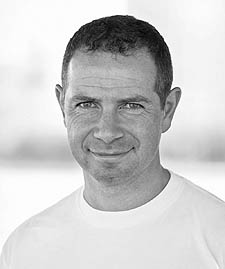 "Inappropriate: The Art of Children's Books" is the title author Elisha Cooper has given to the 24 th annual Fox-Adler Lecture scheduled Thursday, Sept. 20, at Skidmore College.

Free and open to the public, the talk will begin at 5:15 p.m. in Gannett Auditorium of Palamountain Hall. A reception will follow.

Cooper is an award-winning children's author and artist whose watercolor illustrations are at once whimsical and finely detailed. Beach won the 2006 Society of Illustrators Gold Medal. Dance! (2001) was selected as the Best Illustrated Book of the Year by The New York Times. His other children's titles include Magic Thinks Big (2004), A Good Night Walk (2005), Farm (2010), and Homer (2012).

Farmis a celebration of the American farm. Cooper, who lived in Chicago at the time, drove aro8nd rural Illinois sketching and talking to farmers. "Children's books undersell farms," he says. "Cute pigs, red tractors. The real thing is much more interesting."

Homeris a simple story of an elderly dog who waits for his family to come home. The author recalls, "I drew on childhood animals (I had a dog named Homer), and a family house on the shore. I thought how sitting in one spot and observing the world, and being surrounded by family and love is not a bad place to be."

Cooper's adult books include A Year in New York and the memoir Crawling: A Father's First Year. He also posts short pieces on his web site, http://www.elishacooper.com/

After graduating from Yale University, Cooper worked for the New Yorker, first as a messenger, and since 1995 as a writer and artist. He lives with his family in New York City.

Though Cooper's books are available from major online and book-and-mortar retailers, he encourages readers to buy from local independent bookstores.

Skidmore's Fox-Adler Lecture Series is named in honor of Norman M. Fox and the late Hannah Moriarta Adler, connoisseurs and collectors of rare books.  In 1967, Adler loaned her extensive collection of 19th-century books to Skidmore.  After her death in 1989, Fox and his family took charge of her collection and initiated a yearly Adler Lecture, which has become an annual occasion to discuss the importance of literature and art in the nineteenth century. In 2001, the event was renamed the Fox-Adler lecture, and in 2005, the Fox family gave the collection to Scribner Library.

Skidmore presents StartUp Skidmore
The Feb. 17-19 workshop and competition — open to all Skidmore students from all majors — will enable participants to fine-tune their business pitches and develop a prototype for their own creative products and ideas.
END_OF_DOCUMENT_TOKEN_TO_BE_REPLACED
Jan 20 2023

Four seasons of Skidmore: 2022 in review
2022 saw the return of many beloved traditions to campus and marked the start of a yearlong celebration of the College’s Centennial, giving us all reason to pause and reflect on Skidmore’s past, present, and future.
END_OF_DOCUMENT_TOKEN_TO_BE_REPLACED
Dec 15 2022
More News