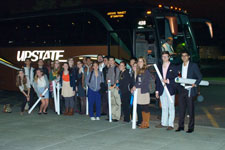 Nearly 100 students from seven colleges and universities attended the annual New York Six consortium’s undergraduate research conference, hosted at St. Lawrence University this year, in late September. And 25% of the students came from Skidmore—a testament to their collective enthusiasm for their work and for the sharing of their experiences and findings.

The other five member institutions were Clarkson, Union, Siena, Colgate, and SUNY-Potsdam. The conference included oral presentations and poster sessions in research fields from the sciences to the social sciences to the humanities (PDF of the program).

“Our students were really engaged because they know how worthwhile the experience is,” says chemistry professor Reba Howard, who attended with Jody-Ann Facey ’14 and Erika Riederer ’14. “Skidmore students really like talking about their research; they’re disappointed if people don’t ask them questions. And they’re eager to ask questions too. They understand it’s not good science if they don’t communicate it well.”

Bob Turner, a government professor and director of Skidmore’s Faculty-Student Summer Research Program, was impressed that all the students were on time—and mostly smiling—for the 5:30 a.m. bus departure from the Skidmore campus. And he adds, “I loved overhearing snippets from their conversations with their counterparts: ‘What kind of assay did you use? How do you control for pH in the soil? I love your experimental design.’ They weren’t so much students as fellow scholars admiring each other’s work.”

“The conference was amazing—an excellent opportunity to network with fellow undergraduate researchers,” says Nile Nair ’15. He produced a poster on his investigations into how the bacterium Bacillus halodurans encodes two distinct pathways for the synthesis of a genetic enzyme. This was Nair’s second consecutive summer with chemistry professor Kelly Sheppard, who he says is an “amazing mentor who encourages me to think outside the box when we encounter bumps along the way.” 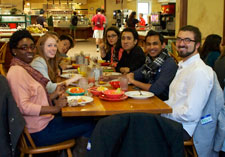 Angelo Gonzalez ’15 presented “Comida Latina: Spanning Cultures, Building Bridges,” which analyzes and builds the case for food as a significant contributor to the Latinization of American culture. He built the project’s Web site in collaboration with Spanish professor Viviana Rangil. At the conference, he says, “I talked with students who also had an interest in computer science, and we shared a lot of neat tips and tricks with each other. It was really nice to see students talking passionately about their research projects, and at the same time being interested in my food project as well.” (For more on Gonzalez’s work, click here.)

Turner reports that, even after their 15-hour day, including six hours on the road, the students exited the bus saying that the experience was “awesome.”

Kara Rode ’15, “The Role of Mediator in Transcription of Inducible Genes in Saccharomyces cerevisiae,” with mentor Randy Morse, a professor at the Wadsworth Center in Albany

A front-row seat to history in London
Skidmore London First-Year Experience students find themselves at the center of a remarkable moment in history following the death of Queen Elizabeth II and accession of King Charles III.
END_OF_DOCUMENT_TOKEN_TO_BE_REPLACED
Sep 16 2022

The start of a new century
Skidmore College is marking its College Centennial with a yearlong celebration of its history and reflections on the journey ahead.
END_OF_DOCUMENT_TOKEN_TO_BE_REPLACED
Sep 14 2022