Comics expert to give Fox-Adler talk

Comics expert to give Fox-Adler talk 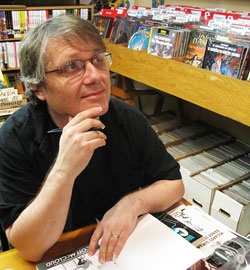 Comic artist and theorist Scott McCloud will speak on “Comics and the Art of Visual Communication” at Skidmore on Thursday, Sept. 17, as part of the College’s annual Fox-Adler lecture series. The talk will take place at 5:15 p.m. in Gannett Auditorium, with a reception following. Admission is free and open to the public.

McCloud is best known as the award-winning author of the influential “Understanding Comics” (1993), a visual treatise on the definition, history, vocabulary and methods of the medium. Later works include “Reinventing Comics” (2000) and “Making Comics” (2006).

His graphic novel “The Sculptor” was released this year. McCloud also wrote 12 issues of DC's “Superman Adventures” and the series “Superman: Strength.” In 2009, he was featured in “The Cartoonist,” a documentary film on the life and work of Bone creator Jeff Smith.

Co-sponsors of this year's Fox-Adler lecture include the following: Fox-Adler Lecture Fund, Project VIS and the Mellon Foundation, Office of the President, Zankel Interdisciplinary Fund, Arts Administration Program, the Media and Film Studies Program, and the departments of English, History, and Art History.

Skidmore presents StartUp Skidmore
The Feb. 17-19 workshop and competition — open to all Skidmore students from all majors — will enable participants to fine-tune their business pitches and develop a prototype for their own creative products and ideas.
END_OF_DOCUMENT_TOKEN_TO_BE_REPLACED
Jan 20 2023

Four seasons of Skidmore: 2022 in review
2022 saw the return of many beloved traditions to campus and marked the start of a yearlong celebration of the College’s Centennial, giving us all reason to pause and reflect on Skidmore’s past, present, and future.
END_OF_DOCUMENT_TOKEN_TO_BE_REPLACED
Dec 15 2022
More News