This Is Skidmore: David Miner '91 and Jared Greenbaum '11

Although 20 years separate their Skidmore experiences, David Miner ’91 and Jared Greenbaum ’11 have an interesting connection. In his freshman year at Skidmore, Miner crafted Skidmore Comedy Night, bringing comedy groups to campus. As he explored his passion for comedy, he produced and founded the National College Comedy Festival (ComFest), which has become a tradition at Skidmore. 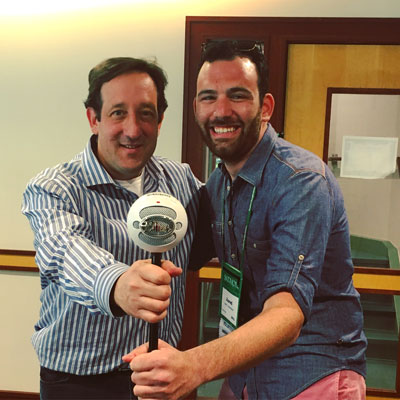 22 years later, in his senior year, Greenbaum served as co-producer for ComFest. Although the event has grown, Greenbaum said the essence of ComFest has remained since its founding. ComFest is a major entertainment event each year for Skidmore students, featuring evening performances from college improv and sketch groups across the country, along with professional comedy performances.

Aside from serving as producers for ComFest while at Skidmore, Miner and Greenbaum connected at 3 Arts Entertainment in Beverly Hills, Calif., which has a history of recruting Skidmore alumni. Miner and Greenbaum have discussed their Skidmore experience along with their unique paths after graduation.

While at Skidmore, Miner majored in theater. Aside from exploring his love of comedy and producing, he was a member of the Bandersnatchers, organizing a reunion performance while visiting campus for his 25th reunion. He currently works as a manager/producer at 3 Arts Entertainment.

Greenbaum is currently pursuing an MBA at Emory University’s Goizueta Business School. He was a self-determined arts administration major and helped create the arts administration minor. While at Skidmore, he served as an Orientation advisor, resident assistant, head admissions ambassador and general manager in the Theater Department.

Photo essay: Excited to be back on campus
The entire Skidmore community is enjoying the start of a new academic year filled with dynamic courses, athletics competition, beloved traditions, and — most of all — the return of all students, staff, and faculty to campus.
END_OF_DOCUMENT_TOKEN_TO_BE_REPLACED
Sep 22 2021

Thoroughbreds triumphantly return to competition
Our fall athletes have been waiting a long time to be back on the field after the 2020 season was canceled. Without missing a beat, they've returned in full force and are racking up the wins.
END_OF_DOCUMENT_TOKEN_TO_BE_REPLACED
Sep 15 2021