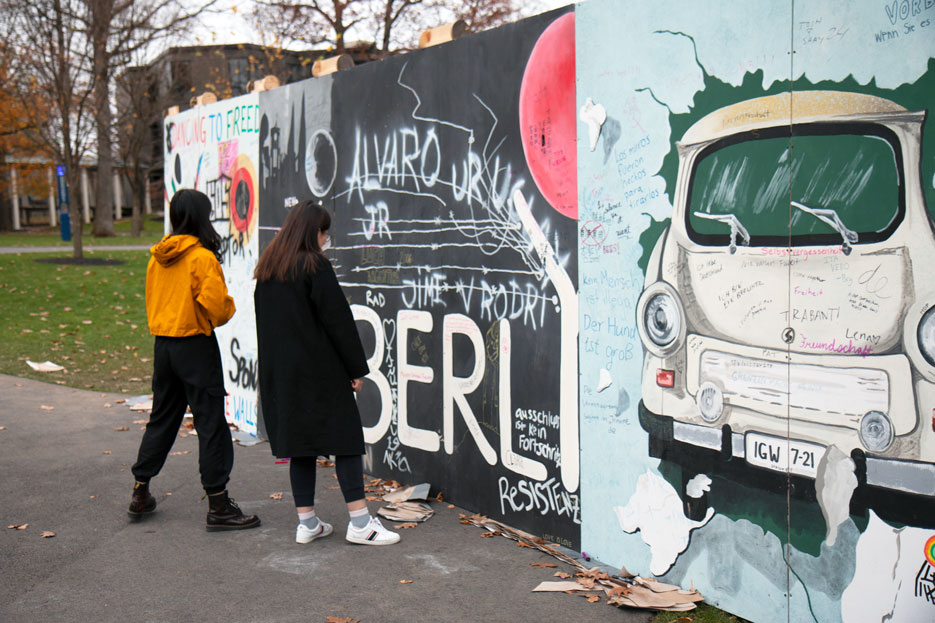 Students examine a reconstruction of the Berlin Wall on campus.
by James Helicke

Even a stroll through Skidmore College’s campus can be a learning opportunity.

Skidmore faculty members Petra Watzke and Garett Wilson and their students erected a 28-foot-long, 9-foot-tall reconstruction of the Berlin Wall through a central pedestrian artery on campus.

The structure has invited members of the Skidmore community and visitors to contemplate the legacy of the notorious Cold War barrier that divided Berlin from 1961 to 1989. Saturday, Nov. 9, marked the 30th anniversary of its fall.

Watzke and Wilson are using the anniversary as an opportunity to explore the legacy of walls, not only in Germany but across the globe.

“I want students to understand the division that walls create, not only physically but in the minds of people,” said Watzke, a visiting assistant professor of German. Watzke grew up in a divided Germany and recalled how the Berlin Wall’s collapse in 1989 allowed her to visit family on the other side of the Iron Curtain. 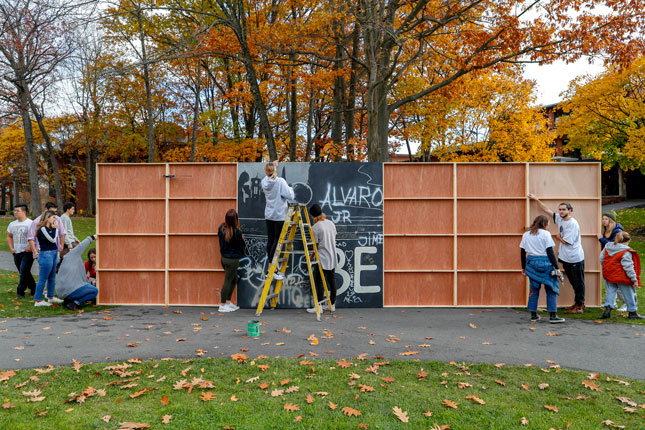 The wall project is part of her course The Berlin Wall, which probes the meaning of the wall in German and global history.

Melanie Nolan ’23, a first-year student who plans to major in English, said she felt encouraged in her first semester at Skidmore to explore a range of different courses and was excited about the opportunity to construct the wall using power drills, hammers, nails and paint.

“It’s so unlike anything I had ever done in high school. It allowed me to think about all aspects of the wall, from how a wall is built to how it impacts people’s lives,” she said.

Readings and discussions with faculty members about barriers in other locations also “allowed me to understand ways that walls around the world continue to impact people today,” Nolan said. 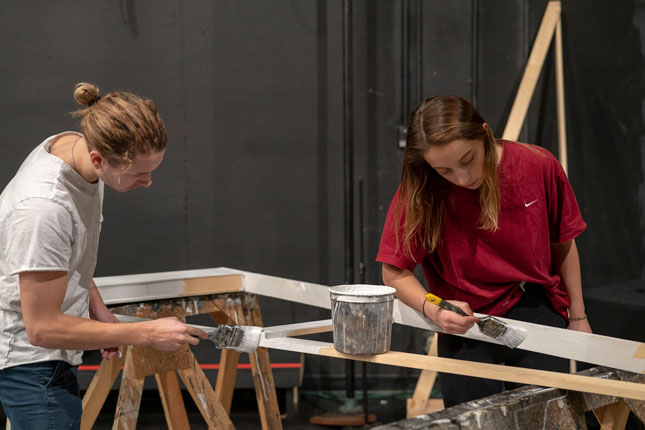 Students paint a reconstruction of the Berlin Wall before it is installed on campus.

Skidmore’s reconstructed wall jutted into a main pathway in the quad near the College’s Murray-Aikins Dining Hall and Case Center.

“The wall is a visible obstruction on campus that all members of the Skidmore campus are affected by and can interact with,” Watzke said, adding that, unlike the historical Berlin Wall, it was possible to simply move around the temporary structure. Skidmore’s “wall should be an inconvenience, not an obstacle,” she added.

Those who passed by the structure were also encouraged to write a message on it — similar to the graffiti that could be seen on the barrier in West Berlin. The other side, similar to the inaccessible wall facing East Berlin, was left plain white.

The unique experience is an example of integrative learning at Skidmore, where students not only read about history but can learn through a hands-on approach involving multiple academic disciplines. 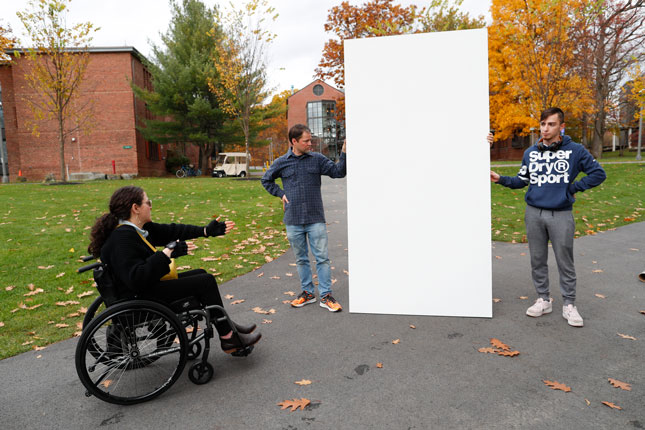 Petra Watzke, left, Garret Wilson, center, and a student in The Berlin Wall course discuss the installation of a panel for the Berlin Wall project.

Emma Eisner ’22, a theater major with minors in German and film and media studies, is creating a documentary as a class project.

“This course was an opportunity to experiment with something I am passionate about,” she said.

Sam Horn ’22, a political science major, said he initially took the course because of his interest in David Bowie’s influential Berlin Trilogy, three albums released in the 1970s, but has enjoyed the opportunity to apply lessons from Berlin to other places.

“It has been interesting to use a historical case to analyze current events,” he said.

As part of the course, other Skidmore faculty have provided perspectives on walls and barriers in other locations, such as in Northern Ireland, in the Korean peninsula, along the U.S. border with Mexico, in China and in the West Bank. They will also participate in a roundtable discussion, “The Human Cost of Border Walls,” on Nov. 14.

The project was backed by Skidmore’s IdeaLab, which supports experimental approaches to learning and encourages Skidmore faculty to incorporate skills associated with making in the classroom.

Erecting the large, plywood structure in a main thoroughfare of campus was unlike anything Watzke had done before in her classes. The IdeaLab initiative brought Watzke together with Wilson, artistic director in the Department of Theater, who led construction of the wall.

Wilson, an experienced stage designer, said he enjoyed the opportunity to research and recreate imagery from the remnants of the actual wall in Berlin. Skidmore’s wall ­— created by Skidmore students as part of the course — reproduced an iconic depiction of an East German car figuratively breaking through the wall and other images.

Wilson also had to build Skidmore’s wall in an unconventional way: It was designed to be toppled on Saturday, Nov. 9 — the 30th anniversary of the wall’s symbolic opening.

Watzke expressed hope that the project — and her course — will spark other conversations about the impact of walls throughout history and today.

“The experience of creating a physical wall on campus allows students to reflect on the political implications of border walls beyond the German context,” she said. “The wall not only relates to the historical significance of the Berlin Wall, but also invites conversations and reflections about walls as borders in history and in our own time.”

Nora Weber ’20, a sociology and fine art major, took the course after studying abroad in Berlin, but said its lessons could be applied elsewhere.

“Building the wall also made it real to me,” added Gianna Stock ’22, a psychology major from New York City. “The real thing really disrupted lives. Walls also cause a lot of pain.”

The Berlin Wall project also received significant public attention due to stories that were featured in regional press, including NBC news, ABC News, Spectrum News and The Saratogian newspaper.

"All in" for Skidmore
As students, staff and faculty prepare to gather together on campus for the start of the fall semester, all members of the Skidmore community must make a personal commitment to following all health and safety protocols.
END_OF_DOCUMENT_TOKEN_TO_BE_REPLACED
Aug 5 2020

Beatlemore Skidmania 2020 to be presented virtually this fall
Planning is now underway for the popular annual concert. This year, students are invited to re-imagine any song in The Beatles’ catalog.
END_OF_DOCUMENT_TOKEN_TO_BE_REPLACED
Jul 29 2020
More News