A generous gift from the Lin-Manuel Miranda Family Foundation helped first-generation Skidmore students and students with financial need pursue professional development opportunities over the summer, when many internships and job opportunities were rescinded or canceled due to COVID-19.

Through a partnership between Skidmore College’s Career Development Center and Cornell University’s online executive certificate program, the Mirandas’ donation supported 44 students as they advanced their skills in areas that would best support their career goals — choosing from programs in marketing, finance and business, data science, technology, diversity and inclusion, health care and more.

“We have changed lives this summer because of the Mirandas,” said Kim Crabbe, associate dean of student affairs in Skidmore’s Career Development Center. “This is really just an unbelievable gift and an unbelievable outcome.”

Luis Miranda Jr. manages the Miranda Family Foundation, which has funded scholarships that support diversity and inclusion in the arts. He and his wife, Dr. Luz Towns-Miranda, have two adult children, Luz Miranda-Crespo and Lin-Manuel Miranda.

In August, a number of the students who benefited from the gift were able to directly express their appreciation and describe their experiences to Luis and Luz.

The Mirandas spoke with the students about the start of the fall semester and thanked them for their efforts in quarantining and complying with COVID-19 health and safety measures, and they listened with interest as each student explained why their summer certificate program experience meant so much to them.

Jeo Bravo ’23, from the Bronx, described how the eCornell corporate communications program allowed him to put the critical- and creative-thinking skills he has developed at Skidmore to work in real-life situations. Cyntia Ismael ’22, from Mozambique, and Richie Romero ’21, from Queens, explained how participating in the data analytics program advanced their research and studies this summer in the absence of internships. Baomou Feng ’21, from Costa Rica, plans to attend medical school and said his experience helped him develop skills that support his goal of becoming an effective, understanding physician. 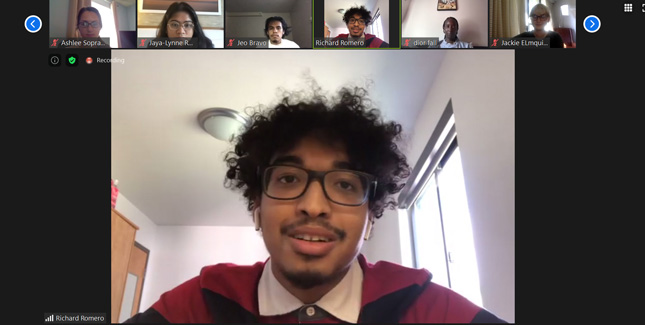 Nicole Richards ’22, from the Bronx, a double major in Spanish and business, completed the Women in Leadership program through eCornell, an experience she said was very necessary in helping her solidify her choice of a second major. She smiled as she described what the accomplishment meant to her mom, who posted her certificate on Facebook.

“I’m so honored to share my gratitude to both of you personally because I’m a student who relies very heavily on external funding for my higher education, and during the entire course, I kept telling my friends and family how much I wished more people had access to these resources,” she said to the Mirandas. “So from the bottom of my heart, thank you.”

Jackie Elmquist, from South St. Paul, Minnesota, an English and political science major at Skidmore, participated in the diversity and inclusion program through eCornell. She began her coursework shortly after beginning work with the Boys and Girls Club of Little Earth, an urban, subsidized housing community for indigenous people in the south side of Minneapolis that has been hit hard by COVID-19 and recent riots. She explained how the certificate program challenged her own unconscious bias and provided her with the tools to enhance her summer youth outreach efforts.

“It was really great to be able to directly apply these skills as I was working and learning about them,” Elmquist said. “They also allowed me to facilitate more difficult conversations and gain more connections to the youth and the community, and I hope that I was able to positively impact them as well.”

The Mirandas were heartened to hear how their gift was able to benefit the students in so many ways.

“I’m happy you were able to enjoy, and I’m happy you did the most you can, given the circumstances we were all given,” said Luis Miranda Jr., who migrated from Puerto Rico to New York City in 1971 and has spent decades working as a relentless activist for Latinx communities. His story, as well as the origin story of son Lin-Manuel, is told in the documentary "Siempre, Luis," now streaming on HBO.

In this clip from “Siempre, Luis,” a documentary about Luis Miranda Jr.’s life that first premiered at the Sundance Film Festival earlier this year and made its debut on HBO on Oct. 6, Miguel Towns opens his Skidmore College acceptance packet.

Luz Towns-Miranda, Ph.D., a respected psychologist, philanthropist and community leader, observed how having a focused activity helped the students remove themselves from the difficulties of the pandemic this summer, and she offered them some advice for the future.

“You need to stay focused and use the resources available at the school to stay on track because it continues to be a challenge,” she said. “The goal is to move forward toward graduation and succeeding and learning as much as possible.”

Wrapping up a remarkable academic year
The Skidmore community is marking the end of an academic year that has been filled with unique arrangements but also fantastic achievements, special moments and exceptional creativity.
END_OF_DOCUMENT_TOKEN_TO_BE_REPLACED
May 4 2021
More News