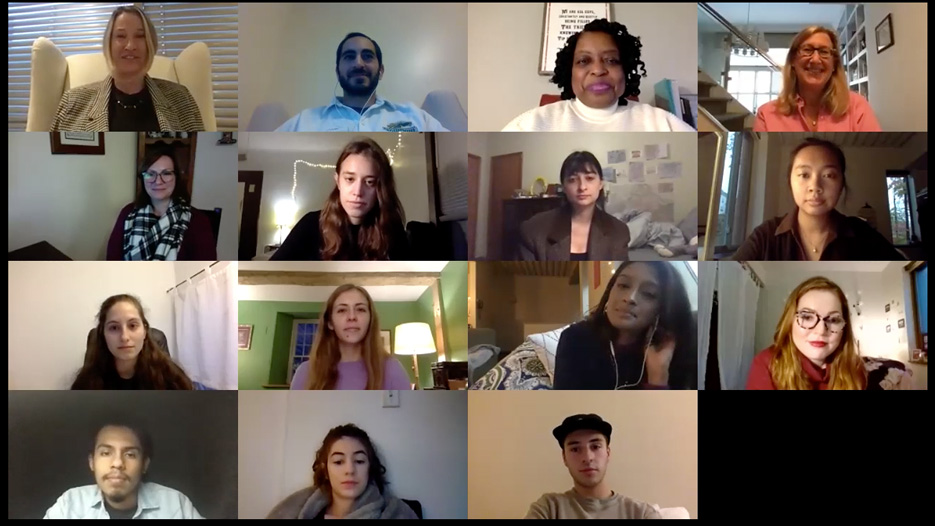 Melissa Winter ‘89, top right, chief of staff in the Office of Michelle Obama, hosted a session and offered advice during this year's virtual Career Jam.
by Pam Fisher

Since Skidmore launched its first Career Jam in 2009 as an on-campus networking event, the annual program has enabled thousands of students to build long-lasting professional connections that have led to job and internship referrals.

Career Jam began as an opportunity for parents to offer career expertise to students during Celebration Weekend, but it has since inspired parents to return as mentors long after their own students have graduated and has grown to involve alumni and employers as well.

While past Career Jam events saw hundreds of students networking with mentors in person, the COVID-19 pandemic made such a format impossible this year.

"When we realized that for the first time in 11 years, we could not hold an in-person Career Jam, the Career Development Center team quickly reimagined a new, virtual event that would be held over five days, featuring a different career focus each day,” said Kim Crabbe, associate dean of the Career Development Center. “The silver lining is that the new format allowed parents and alumni from all over the country and the world to meet, network and guide students without ever having to step foot on campus. The students loved it.”

Each day focused on a different career specialty — arts, media and communications; government and law; business and finance; health and biomedical sciences; and education and social impact — and mentors from a variety of backgrounds volunteered their time. Lawyers, artists, doctors, entrepreneurs and business leaders from organizations including Google, Santander Bank, Stanford Children's Health, NBC Universal and Pixar connected with students in Zoom sessions and took part in panel discussions on topics such as scientific research and public health, the nonprofit field and environmental work.

Students from a variety of majors joined Grammy winner Julianne Jordan '91, owner of Format Entertainment in Los Angeles, and Emmy-winning television and film composer Nathan Barr '95 for a robust conversation about music careers in film. Both Jordan and Barr are based on the West Coast and were able to participate because of the virtual format.

Surprising attendees, Barr invited fellow Skidmore alumnus and musician Harry Ricoleo '18 to join the session. Inspired by a film scoring class at Skidmore, Ricoleo reached out to Barr during his senior year at the recommendation of a professor. Barr welcomed Ricoleo’s assistance on summer projects, allowing him to demonstrate his talent and collaborative abilities with other musicians. Ricoleo and Barr have continued to work together ever since.

Thanks to this year’s online format, Melissa Winter ‘89, was also able to take time out of her busy schedule as chief of staff in the Office of Michelle Obama to advise students during Career Jam.

Winter, who is former first lady Obama’s longest-serving advisor, was an art history major at Skidmore and first became interested in politics when she moved to Washington, D.C., for a summer internship.

Winter shared personal stories during her session, including how she had no intention of changing jobs, or returning to a national campaign trail, until she met Michelle Obama. Within two weeks of meeting her, she moved to Chicago to start her new role. Winter was instrumental in the strategy and design of Michelle Obama’s core policy initiatives, including Let’s Move, Joining Forces, Reach Higher and Let Girls Learn.

Winter encouraged attendees, and specifically women in the workplace, to know their worth and ensure their voices are heard.

“Never doubt yourself,” she said. “It's hard. I still wake up certain mornings and doubt myself. But you'll be a graduate of Skidmore. Every single one of you has something to contribute."

In total, 54 parent and alumni volunteers came together for the virtual Career Jam to support over 35 virtual sessions in which more than 300 students participated throughout the week.

“In a world that is changing so rapidly, this is crucial professional preparation for our students,” said President Marc C. Conner. “Despite this particularly challenging time, we are grateful so many were able to participate.”

Gratitude for a semester of accomplishments and hopeful days ahead
The Skidmore College community has come together this semester to maintain a safe campus, allowing the College to successfully offer 12 weeks of fulfilling in-person instruction and move forward with major initiatives for the future.
END_OF_DOCUMENT_TOKEN_TO_BE_REPLACED
Nov 24 2020