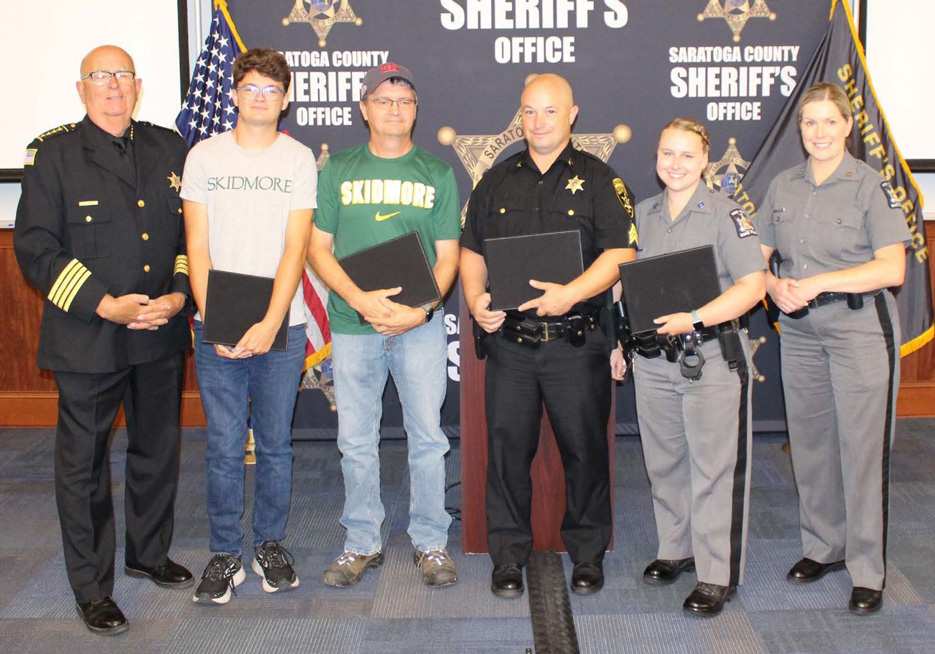 Chris Rafferty, who works as HVAC technician lead in Skidmore’s Facilities Services, and his wife Jill were recently honored with the Saratoga County Sheriff’s Office’s Samaritan Award for helping to save the life of an injured motorcyclist involved in a crash.

The Raffertys, of Moreau, were driving on Route 9 in Wilton when they came upon the accident on July 29. Chris Rafferty applied a bandana as a tourniquet to the victim’s severed leg to slow the bleeding, and he and Jill remained on the scene to provide comfort and assist until police and emergency medical services arrived.

“It is truly what we do when nobody is looking that defines what a hero is,” said Saratoga County Sheriff Michael Zurlo. “The selflessness and compassion shown toward a fellow human being on the part of the Raffertys was perhaps one of the most commendable acts I’ve seen in my career."

Chris and the Raffertys’ son Evan ’26, who accepted the award on his mother’s behalf, were honored at an Aug. 3 ceremony alongside the sheriff’s officer and state trooper who applied additional tourniquets at the scene. Evan is a member of the Sheriff’s Office’s Explorer program.

A front-row seat to history in London
Skidmore London First-Year Experience students find themselves at the center of a remarkable moment in history following the death of Queen Elizabeth II and accession of King Charles III.
END_OF_DOCUMENT_TOKEN_TO_BE_REPLACED
Sep 16 2022

The start of a new century
Skidmore College is marking its College Centennial with a yearlong celebration of its history and reflections on the journey ahead.
END_OF_DOCUMENT_TOKEN_TO_BE_REPLACED
Sep 14 2022