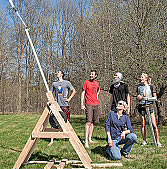 Erica Bastress-Dukehart is an associate professor of history. She received her BS in History from the University of Oregon and her Ph.D. from the University of California, Berkeley.  She is the author of The Zimmern Chronicle: Nobility, Memory, and Self-Representation in Sixteenth-Century Germany, and several articles on early modern German noble family relations.