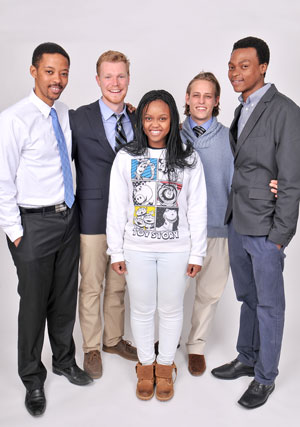 A non-profit organization that started as a Skidmore student's Davis Projects for Peace initiative has been awarded $5000 in the New York Business Plan Competition.

With $10,0000 in Davis funding, Tshediso J. Matake '17 developed computer literacy programs at an elementary school in his native South Africa. Enlisting other Skidmore students, he now aims to establish a network of Internet-equipped "mobile enrichment centers" in the Limpopo region of South Africa. Calling their new enterprise Klicka, they were awarded second place in the social entrepreneurship category of the New York Business Plan Competition, held April 24 at SUNY Polytechnic's College of Nanoscale Science and Engineering.

Including $2,500 they won in the Kenneth A. Freirich Business Plan Competition on April 10, Klicka now has $7500 toward its immediate goal of $26,000 — the amount they need to establish their first center in a solar-powered cargo container. Through monthly subscriptions, they aim to generate sufficient revenues to establish additional centers throughout the Limpopo region, where only three percent of the population has access to the Internet and other information technologies.

"Our goal is to foster the technological culture that's essential for today's communities to reach their highest academic, social and professional potential," says Matake. "We've worked hard to make it to this point and it's both humbling and exciting to have so many people, including the judges, to be supportive of our mission."

"They were poised, professional, fearless and extremely well-prepared," said Catherine Hill, F. William Harder Professor of Business Administation, who coached the students in her entrepreneurship class.

Two other Skidmore teams that won prizes in the Freirich Competition on April 10 — Double Dee's and AllStolen Apparel — made the final round of the New York Business Plan Competition. Although not awarded cash prizes, both are poised to take big steps in the development of their businesses.

Stella Langat '16, who has established Double Dee's as Kenya's first indigenous undergarment manufacturer, said she'll use her $20,000 Freirich Competition first prize to produce a first run of 480 bras to be sold in Kenyan stores and to recruit a professional advisory team.

Allstolen, which took the second prize of $10,000 in the Freirich Competition, will launch a Kickstarter campaign to raise the rest of the money needed to produce an initial run of clothing to sell as early as this summer, said Elizabeth Worgan '16, one of the firm's two co-founders.