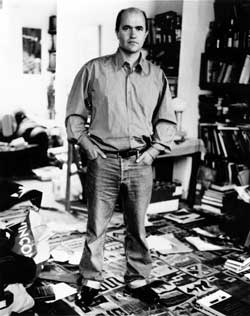 Novelist Colm Toibin will present "Fresh News from a Small Town," the annual Frances Steloff Lecture at Skidmore College, at 8 p.m. Tuesday, Oct. 20, in Gannett Auditorium, Palamountain Hall. Admission is free and open to the public.

Toibin will receive an honorary doctorate from Skidmore before his combined lecture/reading, which will be followed by a question and answer session with the audience.

Widely regarded as the leading Irish novelist of his generation, Toibin came to fame with The Master, his 2004 novel based on the life of Henry James. He is also an influential critic, memoirist, and man of letters. His work as a journalist, travel writer, novelist, short-story writer and playwright has received many prestigious awards and has been translated into more than 30 languages. He is a regular contributor to the New York Review of Books and a contributing editor at the London Review of Books. Toibin was inducted into the New York State Writers Hall of Fame in 2015. He is also president of Listowel Writers Week and chair of Pen World Voices in New York.

He was recently interviewed by The New York Times Book Review.

The Steloff lecture is named for Saratoga Springs native Frances Steloff, who left her hometown in 1900 for New York City, where she founded the legendary Gotham Book Mart. Over the next several decades, her generosity and friendship to numerous authors advanced the careers of literary luminaries from E.E. Cummings to Tennessee Williams. Steloff accumulated a vast collection of books and literary memorabilia—including inscribed copies of first editions by Gertrude Stein, Henry Miller, and Anaïs Nin; photographs with personal messages, letters and notes; and copies of rare publications—much of which she donated to Skidmore College.

In 1967 Steloff endowed the lecture series as a way to bring outstanding literary and artistic talent to Skidmore.

Skidmore presents StartUp Skidmore
The Feb. 17-19 workshop and competition — open to all Skidmore students from all majors — will enable participants to fine-tune their business pitches and develop a prototype for their own creative products and ideas.
END_OF_DOCUMENT_TOKEN_TO_BE_REPLACED
Jan 20 2023

Four seasons of Skidmore: 2022 in review
2022 saw the return of many beloved traditions to campus and marked the start of a yearlong celebration of the College’s Centennial, giving us all reason to pause and reflect on Skidmore’s past, present, and future.
END_OF_DOCUMENT_TOKEN_TO_BE_REPLACED
Dec 15 2022
More News