Recent alums share their successes and reunite with faculty mentors 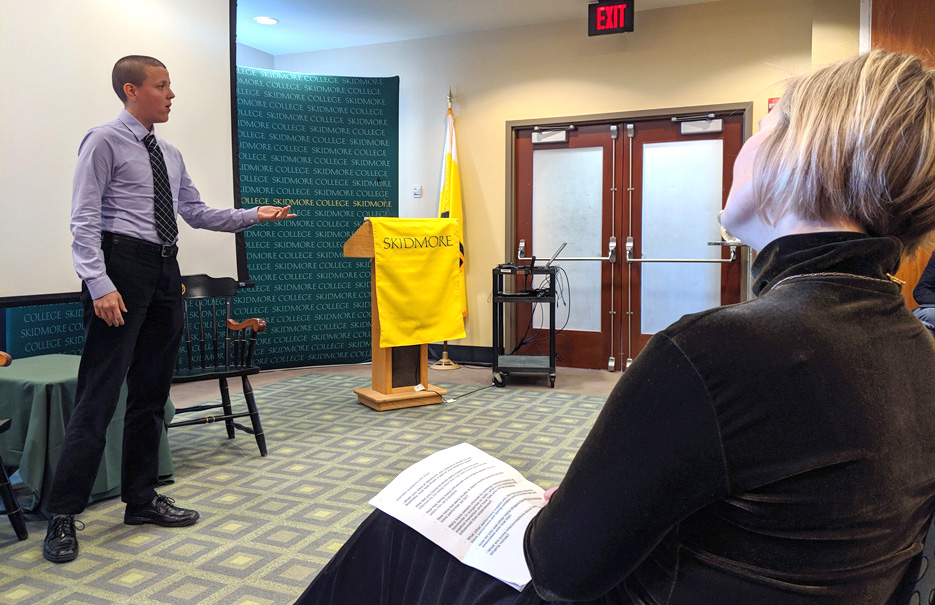 Sylvia Stoner-Hawkins, voice artist-in-residence at Skidmore, looks on as her former student, soloist Eli McCormack ’16, performs an operatic piece during the inaugural Generations: Creating by Hand and Mind event hosted by the Center for Humanistic Inquiry on Nov. 9.
by Angela Valden

Randy Abreu ’11, senior legislative assistant for U.S. Rep. Alexandria Ocasio-Cortez, Whitney McCann ’07, a public defender, and Rachel Castellano ’16, a political science doctoral student, fight for justice. Eli McCormack ’16, a male soprano and soloist, and Jesse Kovarsky ’10, a dance and movement director, are breaking down barriers in the arts. Evan Goldstein ’03, editor of The Chronicle Review, Sarah Green ’11, an independent translator of Spanish, Portuguese and English, and Beth DeBold ’09, assistant curator for collections at the Folger Shakespeare Library, are making the world more informed.

“These are humanists out there changing the world,” said English Professor Barbara Black, who co-organized the Center for Humanistic Inquiry’s inaugural Generations: Creating by Hand and Mind program with Associate Professor and Chair of Classics Michael Arnush. The eight alums returned to their alma mater on Nov. 9 to celebrate their ongoing connections with their Skidmore faculty mentors and to share with the College community what they’ve learned and achieved since graduating.

The eight alums discussed their pursuits after Skidmore, then engaged in a dialogue with their mentors and an audience that consisted of current Skidmore students, faculty, staff and alumni.

“I’m so honored to be back at Skidmore because coming back and thinking about what I wanted to say reminded me how influential Skidmore has been in my life,” said Abreu, who was once a student in Skidmore’s Opportunity program and now works for the youngest woman ever to serve in the U.S. Congress. “While I was at Skidmore, I met so many incredible professors and had so many incredible classes that shaped and influenced me.” 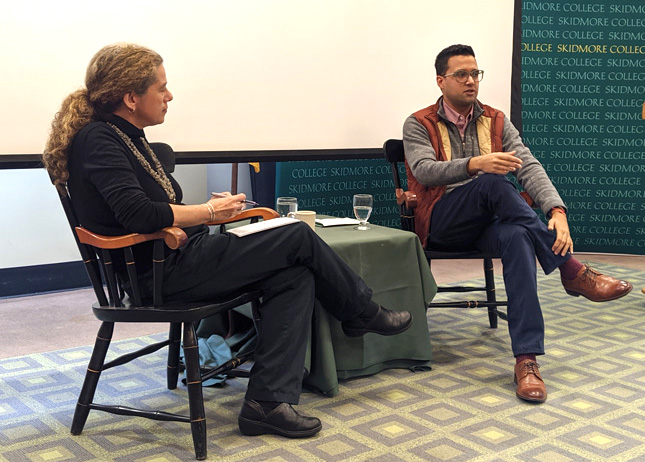 Faculty mentor Jordana Dym recalled a summer collaborative research project with Abreu that furthered his interest in history, politics and public activity and influenced how she teaches Latin American history.

“Our students shape us, and we shape our students,” Dym said.

Anissa Joseph ’22, a political science major and Latin American studies minor, who is now contemplating her own path after graduation, was inspired by the alumni presentations. “It gives me a lot of hope for my future,” she said. “I know now that these relationships are really worthwhile and that they (Skidmore faculty) are so supportive of our studies and what we want to do.”

Many of the faculty and alums who took part in Generations continue to collaborate. Jennifer Delton, professor of history, uses articles written by former student Goldstein as resources in her classroom, and Maria Lander, associate professor of Spanish, occasionally seeks out the expertise of former student Green.

“After Sarah graduated, we kept in touch,” said Lander. “She has done translations for me. I trust her so much.” 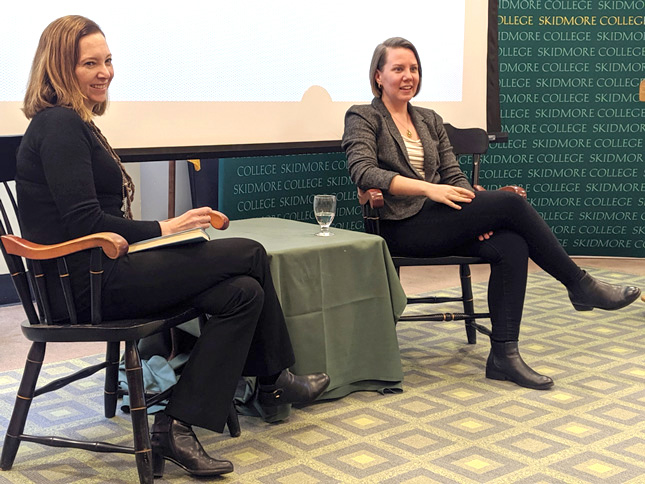 Maria Lander, associate professor of Spanish, and her former student Sarah Green ’11, an independent Spanish, Portuguese and English translator in North Carolina, take questions from the audience following their conversation during the inaugural Generations event hosted by the Center for Humanistic Inquiry.

Some of the alumni presenters even overcame challenges in life with the support of their faculty mentors.

Eli McCormack ’16, who majored in studio art and minored in business at Skidmore, had grown up in choir, taken voice lessons all the way through college and didn’t want to let go of his dream of pursuing music. While at Skidmore, he realized he didn’t have to.

“When I came out as transgender, I thought for a long time that a performing career was sort of off the table for me. It took a while to figure out that there was a niche, and it was actually thanks to you and the Skidmore Music Department that I discovered early opera,” McCormack said to his mentor, voice artist-in-residence Sylvia Stoner-Hawkins '94.

McCormack went on to earn a master’s degree in historical performance voice and is beginning a promising career as a male soprano and soloist.

“You are a voice of change, and thank you for changing the world,” Stoner-Hawkins said to her former student.

McCormack also sang three operatic pieces, accompanied by Richard Cherry on the harpsichord, with whom he had collaborated for his junior recital. 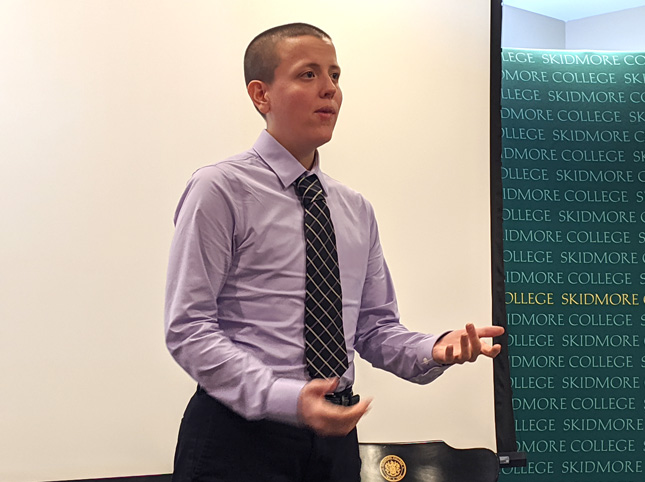 Black and Arnush said they received lots of positive feedback about the inaugural event and hope to see it continue as a fall semester counterpart to the faculty-focused Symposium on Humanistic Inquiry that takes place in the spring.

“I have felt goosebumps, I have had a few tears in my eyes. I’ve been very moved and very inspired,” Black said of Generations. “I think there are connections that have been made here that will continue to reverberate and continue to be generative.”

After the first four alums presented during the daylong event, Arnush paused to reflect on its meaning from the perspective of a faculty member.

And, Black observed, “They’re all carrying Skidmore with them still through their lives.” 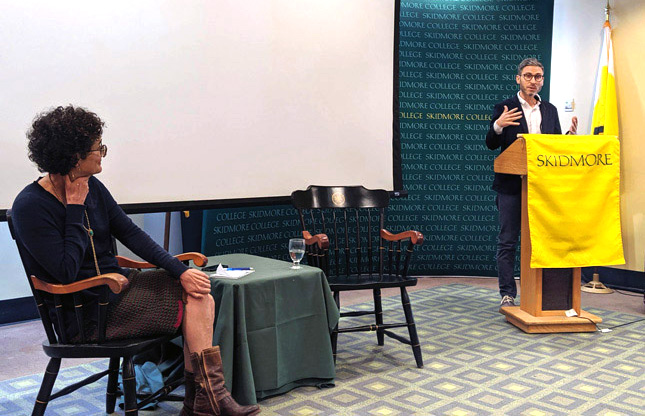 Jennifer Delton, professor of history, looks on as her former student Evan Goldstein ’03, editor of The Chronicle Review in Washington, D.C., speaks during the inaugural Generations event hosted by the Center for Humanistic Inquiry. 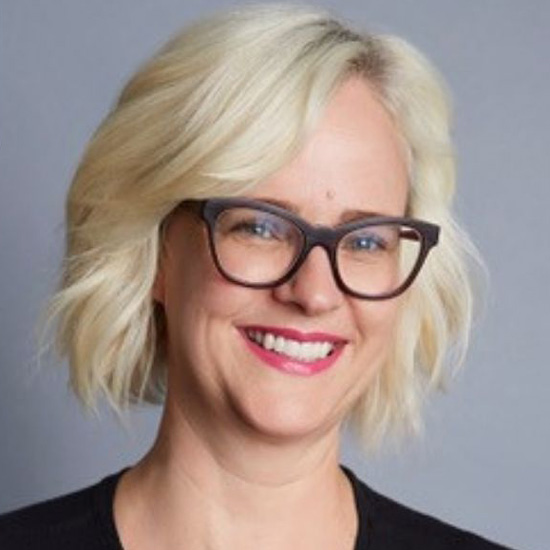 Skidmore Speaks 2020 tackles social media speech and safety
Series of virtual programs will examine the role of social media today and how users can protect themselves and others from abusive practices.
END_OF_DOCUMENT_TOKEN_TO_BE_REPLACED
Oct 21 2020 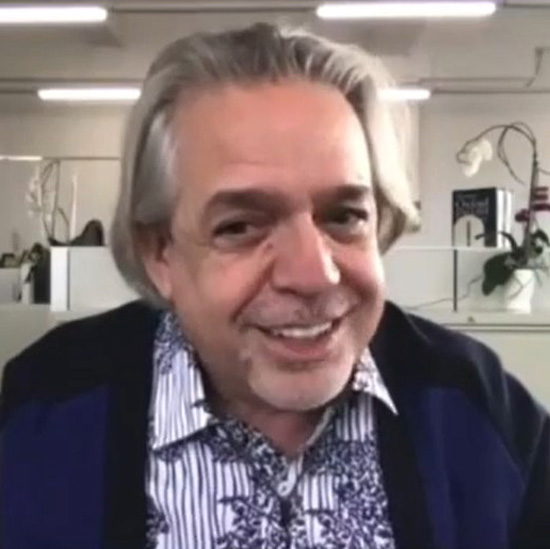