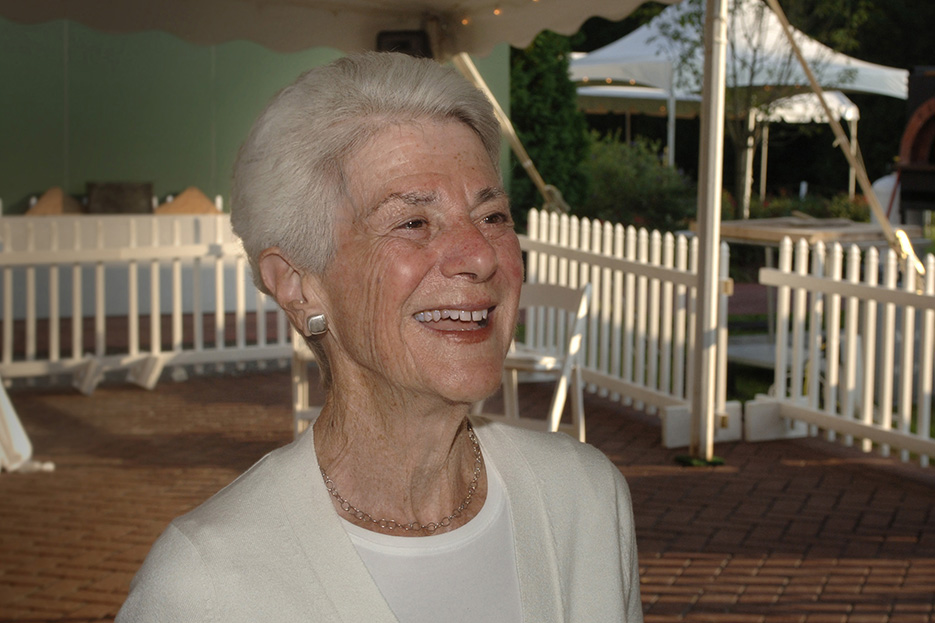 Billie Tisch, a member of Skidmore’s Class of 1948, has given back extensively to her alma mater. The Center for Integrated Sciences, the single largest academic project in College history, will be named in her honor.

Skidmore College is recognizing the visionary leadership and service of longtime trustee Wilma “Billie” Stein Tisch ’48 by naming its new Center for Integrated Sciences, the largest single academic project in College history, in her honor.

Billie, a 1948 Skidmore graduate and one of its most generous donors, served on the Board of Trustees from 1994 to 2014, helping to guide the College through an intense period of expansion.

Members of the Skidmore community are invited to join in a naming ceremony and dedication for the new Billie Tisch Center for Integrated Sciences at 11:15 a.m. Friday, May 20. The event coincides with the completion of the project’s East Wing, the second of three phases of the project’s construction.

“This special occasion is an opportunity to celebrate one of Skidmore’s most significant new buildings in a generation and to recognize Billie’s many impactful contributions to Skidmore today and for generations to come,” said President Marc Conner. “The historic nature of this milestone also adds to our community’s excitement and the celebratory spirit leading up to Commencement for the Class of 2022 on Saturday, May 21.” 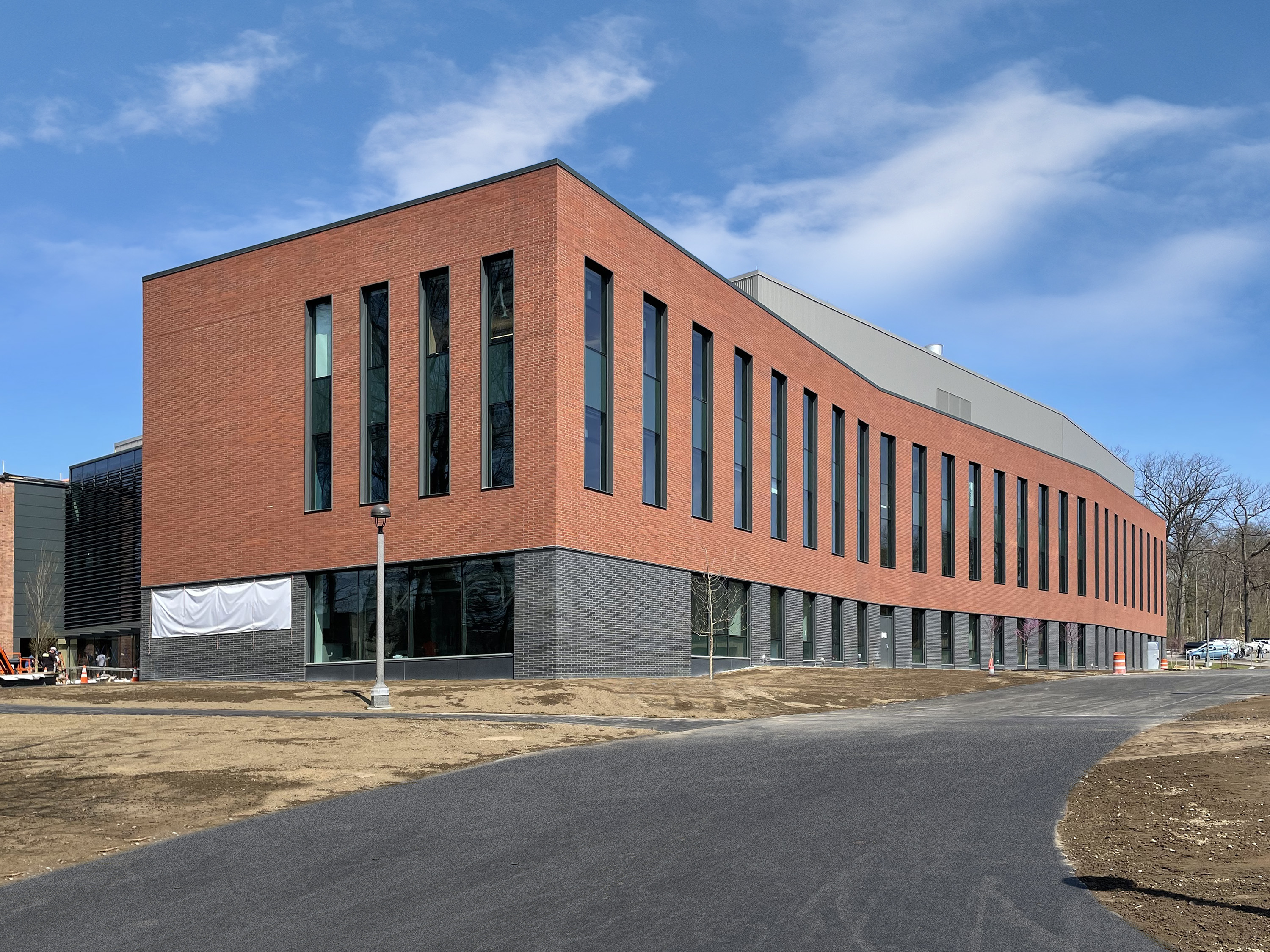 A naming ceremony and dedication for the new Billie Tisch Center for Integrated Sciences takes place Friday, May 20.

The facility’s East Wing will open its doors to students this fall. The first phase of the project, the North Wing, opened in fall 2020. The remainder of the project is on track for completion in 2024.

Billie ardently advocated for the ambitious project, which brings together all of Skidmore’s science programs under a single roof and fosters extensive interdisciplinary connections across the sciences, arts, humanities, and social sciences. She had even conceived the term “integrated” in the building’s name as the best description of all the ways the new facility would serve the Skidmore community.

In addition to supporting the new science center, Billie and her family have spearheaded an array of initiatives at the College that support the academic work of students and faculty. They established the Tisch Family Scholarship Endowment in 1994, and funded the Tisch Chair in Arts and Letters and the Tisch Family Distinguished Professorship, each an indicator of the family’s dedication to Skidmore excellence and creativity in both scholarship and teaching. The Tisch Learning Center, completed in 1987, honors Billie Tisch and her late husband, Laurence Tisch. 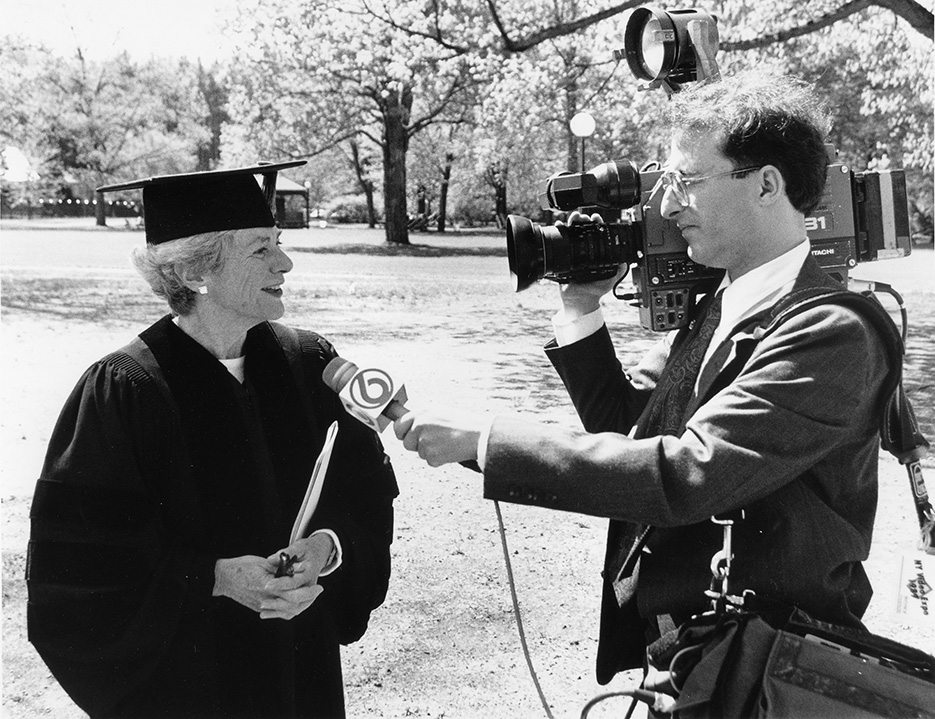 Billie Tisch '48 is interviewed before Commencement in 1990, when she received a Doctor of Humane Letters degree from Skidmore.

Billie also contributed generously to establish an endowed chair with her graduating class, the Class of 1948 Chair for Excellence in Teaching. Her longstanding support of the Skidmore Fund has been a continuing demonstration of her commitment to ensuring that all students have access to the dynamic experiences associated with a Skidmore education.

“Our mother loves Skidmore. It is her cherished alma mater,” said Billie’s sons Andrew, Daniel, James, and Thomas Tisch. “Skidmore has also been a great inspiration of community for her for close to 80 years — from her days as an undergraduate to her years on the Board of Trustees and as a loyal alumna. Along with our mother, we are honored to celebrate the Billie Tisch Center for Integrated Sciences at Skidmore.”

Billie is the recipient of numerous awards for her service to Skidmore, including an honorary doctorate in humane letters (1990), an Alumni Association Outstanding Service Award (1998), and the Jacqueline M. Jung ’61 Lifetime Service Award (2018).

As a trustee, Billie served on nearly every major College governance committee. She has been instrumental to major capital campaigns at Skidmore, including the College’s first major campaign, Skidmore Journey: A Campaign for Our Second Century, which strongly increased Skidmore’s endowment and supported the construction of key facilities, including the Tang Teaching Museum and Art Gallery.

Billie’s support for Skidmore is part of her widely known philanthropy and civic leadership. Among other distinctions, she was the first woman elected president of the Federation of Jewish Philanthropies. When explaining her enduring commitment to serving others, she is known to say: “The rewards of service are intrinsic.”

Skidmore presents StartUp Skidmore
The Feb. 17-19 workshop and competition — open to all Skidmore students from all majors — will enable participants to fine-tune their business pitches and develop a prototype for their own creative products and ideas.
END_OF_DOCUMENT_TOKEN_TO_BE_REPLACED
Jan 20 2023

Four seasons of Skidmore: 2022 in review
2022 saw the return of many beloved traditions to campus and marked the start of a yearlong celebration of the College’s Centennial, giving us all reason to pause and reflect on Skidmore’s past, present, and future.
END_OF_DOCUMENT_TOKEN_TO_BE_REPLACED
Dec 15 2022
More News