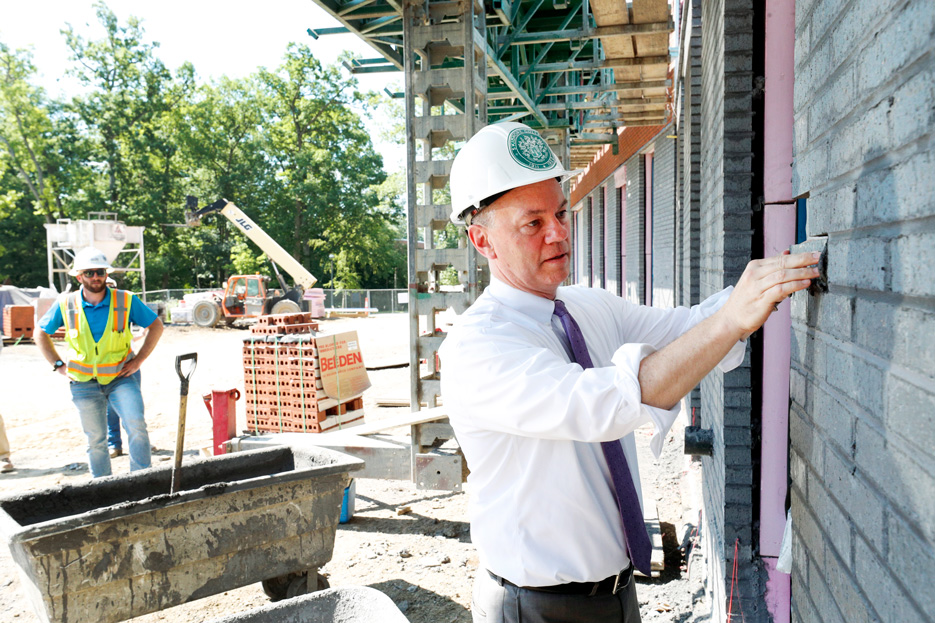 President Marc Conner places a ceremonial brick in the nearly completed east wall of the Center for Integrated Sciences' East Wing on June 30. The East Wing and New Dana — the renovation of the newer portion of Dana Science Center — comprise Phase II of construction and are slated to open in time for the fall 2022 semester.
by Angela Valden

As the second phase of construction for Skidmore’s Center for Integrated Sciences advances on schedule this summer, President Marc Conner helped commemorate an important milestone in the raising of the project’s East Wing.

Just two weeks after the building’s first brick was laid on June 15, President Conner picked up a trowel on June 30 to set in place a ceremonial brick in the nearly completed east wall.

“This is a great day as we continue to see incredible progress in this game-changing project for Skidmore’s students, faculty and staff,” said President Conner. “These beautiful, well-equipped new facilities are expanding learning and research opportunities not only in the sciences, but between and among so many areas of study at the College.”

The East Wing and New Dana — the renovation of the newer portion of Dana Science Center — comprise Phase II of construction and are slated to open in time for the fall 2022 semester.

The East Wing will be home to the IdeaLab makerspace, a core component of the CIS project that represents the spirit of integrative learning at the heart of this largest academic initiative in the College’s history. As a hub of collaboration and interdepartmental synergy, students and faculty will work collaboratively and across disciplines in the new space to explore creative solutions to some of today’s pressing issues.

Other key features of the East Wing include the Skidmore Analytical Interdisciplinary Laboratory (SAIL) and the building’s grand atrium, also known as the “living room” of CIS. 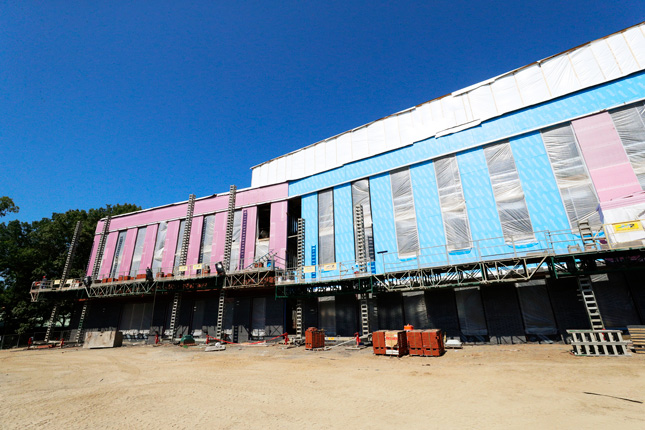 Construction progresses on the East Wing of the Center for Integrated Sciences.

“This current work is interesting — it is the new building of the East Wing, but it is also the renovating of New Dana and blending the two buildings together,” said Pat Fehling, associate dean of the faculty and professor for health and human physiological sciences. “In the new spaces, you will see the exterior brick from New Dana in the interior of the ‘gallery space.’ This work is the collision of the new and the old, and that is exciting.”

The East Wing will house Skidmore’s Biology and Chemistry departments, as well as some neuroscience faculty research labs. Environmental Studies and Sciences, which has been sharing the Annex swing space building on campus with the Physics and Geosciences departments since fall 2020, will also be relocated to the East Wing and New Dana.

Once the East Wing and New Dana are completed in 2022, a full renovation of Old Dana will begin. Also a two-year project, the anticipated completion of this third phase of construction in 2024 will mark the completion of the entire CIS complex.

The Health and Human Physiological Sciences, Psychology and Physics departments and the Neuroscience Program will move into the renovated Old Dana space, rounding out the placement of all 10 of Skidmore’s science departments and programs and more than 90 faculty science members within one center.

The first phase of the CIS, the North Wing, was completed and opened in time for the fall 2020 semester and is home to the departments of Computer Science and Mathematics and Statistics, in addition to some chemistry and biology classes. It houses the Skidmore Microscopy Imaging Center (SMIC), whose collection of microscopes rivals those of larger research institutions, and features 58 laboratories and classrooms and 21 faculty and staff offices.

The first building in Skidmore’s history to be LEED-certified, the North Wing also reflects a commitment to sustainability at Skidmore that remains a key priority in the design of the second and third phases as well. A new underground geothermal system housed in the North Wing will heat and cool all 200,000 square feet of the CIS.

Skidmore officially celebrated the completion of the North Wing in late March during an outdoor, socially distanced ceremony.

The Capital Region’s own MLB Construction is managing the project, currently overseeing about 20 different contractors on site.

A front-row seat to history in London
Skidmore London First-Year Experience students find themselves at the center of a remarkable moment in history following the death of Queen Elizabeth II and accession of King Charles III.
END_OF_DOCUMENT_TOKEN_TO_BE_REPLACED
Sep 16 2022

The start of a new century
Skidmore College is marking its College Centennial with a yearlong celebration of its history and reflections on the journey ahead.
END_OF_DOCUMENT_TOKEN_TO_BE_REPLACED
Sep 14 2022