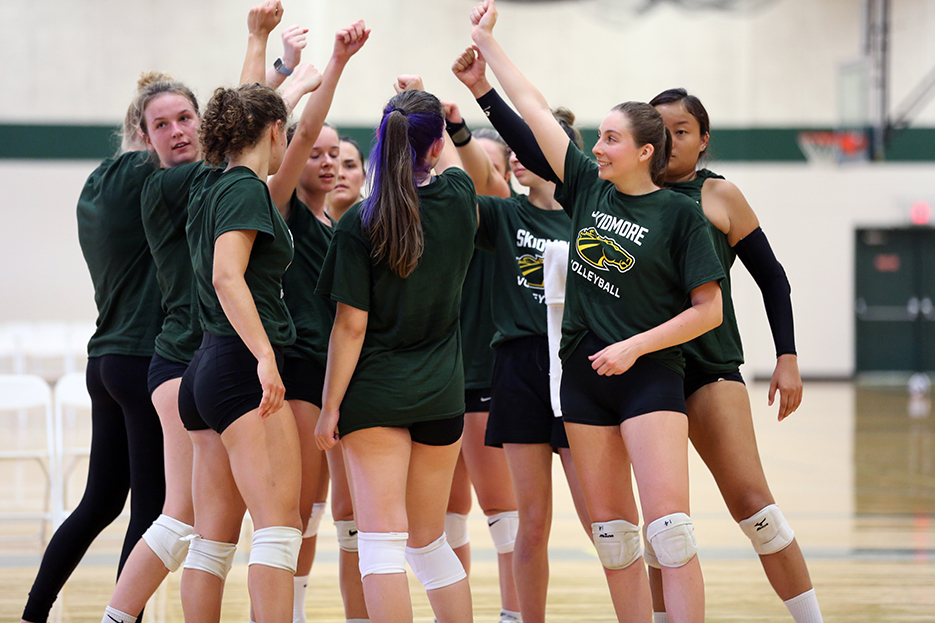 Members of the women's volleyball team show Thoroughbred spirit at practice in August.
by Kyle Lancto and James Helicke

With lots of sweat and plenty of laughter, Thoroughbred student-athletes are filled with excitement and high hopes for a successful fall season and academic year.

"I could feel the excitement from my teammates and other fall athletes. In the dining hall, in the sports center, and walking around campus, there's an obvious eagerness to get back to playing all the sports we love,” said men’s soccer goalie Bobby Stratts ’23, who spent the summer at Skidmore. “I'm looking forward to getting back together with my Skidmore family, seeing the new and returning guys, and — most importantly — playing.” 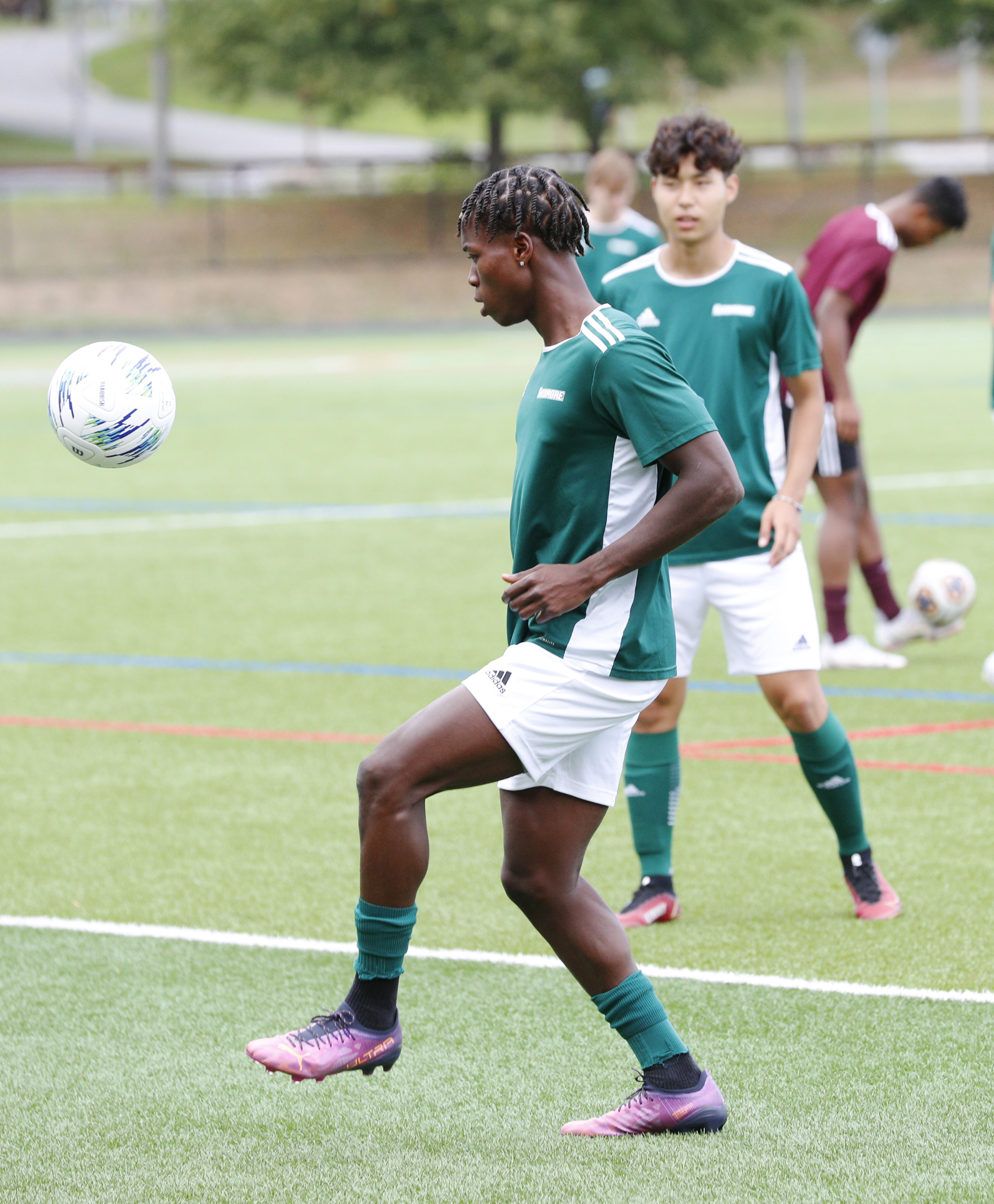 Although the men’s and women’s rowing teams won’t hit the water until Sept. 12, Head Coach Emanuel Valentin has been busy getting the boathouse ready. “We have big plans for the upcoming year. When we are at the boathouse, everyone can expect to work hard and they can expect to have some fun and laughter.”

Meghan Nicchi, head athletic trainer, expressed hopes amid all the challenges posed by the pandemic since 2020.

“This year is starting off really positive, and we are all excited to get back to making sure people are healthy and playing the sports they love,” Nicchi said. “We are happy to see smiling faces and to get back to the day-to-day rigors of collegiate sports.”

Although the fall 2022 season hasn’t even started yet, Stratts of the men’s soccer team is already looking toward postseason play in the Liberty League and hopefully beyond.

“I'm willing to do anything and everything in my power to help achieve this goal I've been chasing for years now,” Stratts said. “Bring on 2022-2023!” 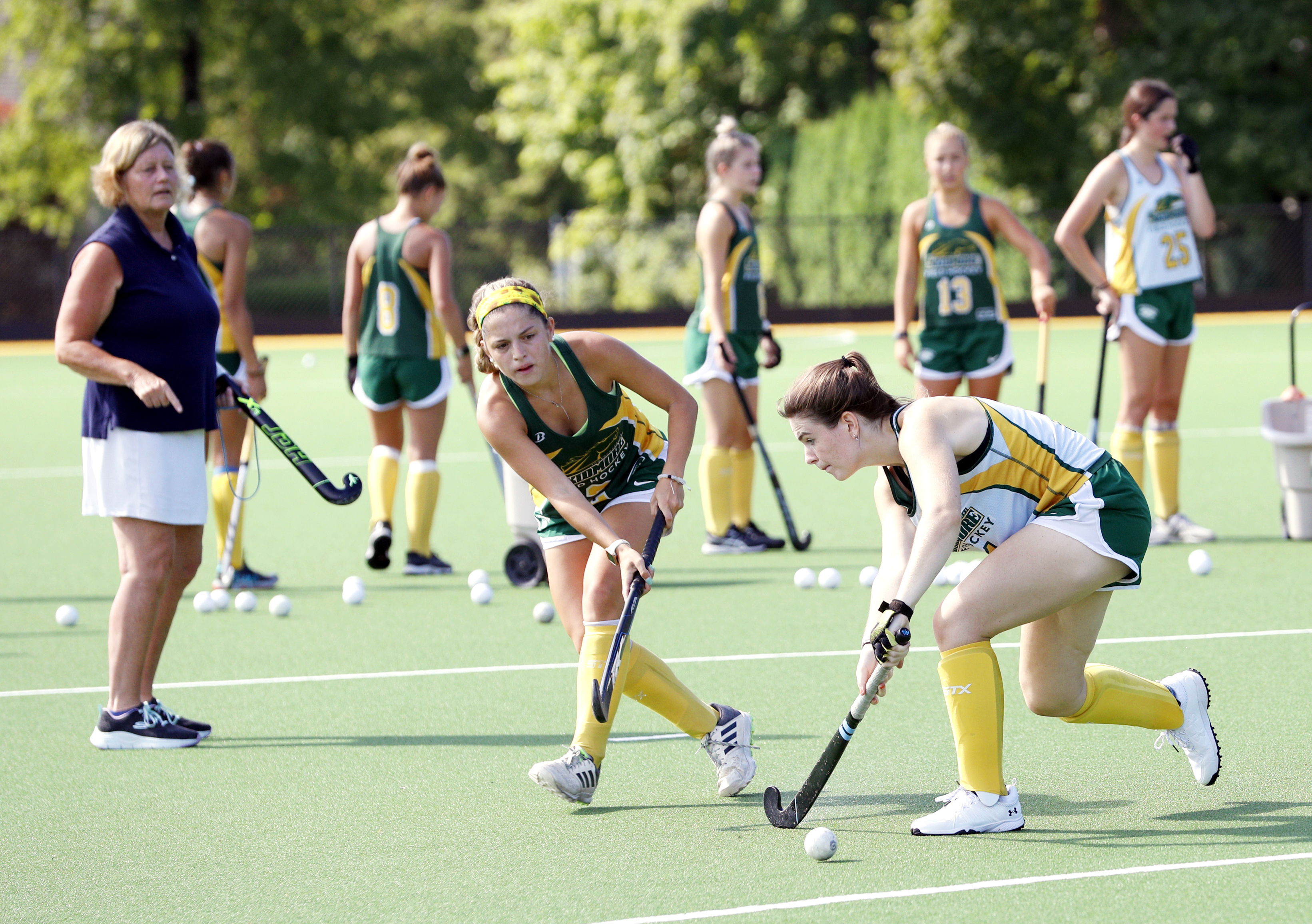 Here are some highlights for the first weeks of the season. Visit the Skidmore Athletics website for fall team schedules.

The Thoroughbreds will look to build on the success from the tail end of the 2021 season to earn a spot in the Liberty League Tournament and vie for the 10th league title and 16th NCAA Tournament appearance in program history. Skidmore hosts Thomas College at noon on Saturday, Sept. 3, to kick off the regular season.

After a strong nine-win season a year ago and an appearance in the Liberty League semifinal, Skidmore is looking to avenge the penalty-kick semifinal heartbreaker as they start their season against Worcester Polytechnic Institute at 3 p.m. on Saturday, Sept. 3, at Wachenheim Field.

The Thoroughbreds reached the Liberty League Tournament in 2021 after an eight-win campaign, which matched the most victories in a season for the program since 2013. The Thoroughbreds kick off the 2022 season at noon on Saturday, Sept. 3, at home versus Castleton University.

Under new head coach Lindsay Bynon, Skidmore brings a wealth of enthusiasm and experience to the table in 2022 as it competes for an elusive Liberty League playoff spot. The Thoroughbreds travel to Springfield College for three non-league, season-opening matches Sept. 2-3.

Skidmore continued its dominance last season by winning its 11th consecutive Liberty League championship. The title defense begins this fall with a pair of tournaments and one conference match. The season begins at Williams College’s Morehouse Invitational Sept. 16-17.

This spring, Skidmore reached the Liberty League championship match for the 11th consecutive season and will look to stand on top the ladder this season under first-year Head Coach Nick White. The Thoroughbreds will gear up for the spring season by competing in a pair of tournaments this fall: the Middlebury Invite Sept. 23-24 and the ITA Regional Championships Sept. 30-Oct. 2 at Drew University.

Skidmore finished third at the Liberty League Championship this spring and will turn to an experienced group of athletes to lead the charge in 2022-23. The Thoroughbreds play in four tournaments this fall, opening at the Duke Nelson Invitational at Middlebury College Sept. 10-11.

A front-row seat to history in London
Skidmore London First-Year Experience students find themselves at the center of a remarkable moment in history following the death of Queen Elizabeth II and accession of King Charles III.
END_OF_DOCUMENT_TOKEN_TO_BE_REPLACED
Sep 16 2022

The start of a new century
Skidmore College is marking its College Centennial with a yearlong celebration of its history and reflections on the journey ahead.
END_OF_DOCUMENT_TOKEN_TO_BE_REPLACED
Sep 14 2022