An artist who draws inspiration from Victorian women naturalists and a panel discussion featuring artists and writers are among the highlights of the 2013 Summer Studio Art Program at Skidmore.

The program, under the direction of Katie DeGroot, will also feature a series of brown bag lunches with a number of noted visiting artists.

First up is Emilie Clark, this summer’s featured artist, who will give an illustrated talk at 7 p.m. Tuesday, July 9, in Filene Recital Hall. A reception will precede the talk at 6:30 p.m. Admission is free.

Said DeGroot, “While Emilie’s artwork is visually beautiful on its own she has found a wonderfully rich vein of information to mine as inspiration. Her research into women and science has given her art a deeper meaning and a more meaningful connection for her audience.  Women, art, and science — a great Skidmore combination. Talent and inspiration as well as commitment to your work are all important parts of creating art.”

Clark’s work involves drawing, painting, installation, and writing.  For more than a decade she has focused on Victorian women naturalists as the point of departure for her art. The work of such historical figures as Mary Ward, Mary Treat and Martha Maxwell has centered on close observation of ambiguous objects and feeds off the constant flux between categories generated by the observation, according to Clark. “Following them in their endeavors allows me to bring otherwise conflicting elements into my work – cosmology, natural history, collecting, taxonomizing, role-playing,” she said.

Clark currently has a solo show titled “Women, Nature, Science,” at Milwaukee’s Lynden Sculpture Garden.  Also during 2013-14 she will have work featured in the inaugural exhibition at the Children's Museum of Art in New York and in Around the Table: Food, Creativity, Community” at the San Jose Museum of Art. 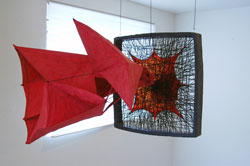 In 2010 Clark was the first artist-in-residence at the Brooklyn Botanical Garden and her residency culminated in a solo exhibition in the Steinhardt Conservatory.

Her awards include the Pollock Krasner Award and the Rockefeller Foundation’s Bellagio Fellowship. She has collaborated extensively with scientists and poets and has been published in numerous books, journals and periodicals. Her medical drawings have appeared on journals and textbook covers, including the Journal of Experimental Medicine and the History of Endocrine Surgery.

At 6 p.m. Thursday, July 18, in the Tang Museum, “Talking Images,” a discussion featuring James Esber, April Bernard, Rick Moody, and Jonathan Santlofer, and moderated by Ian Berry, is scheduled. The panelists will consider words as image, and words that make images. Bernhard and Moody are participating in the New York State Summer Writers Institute at Skidmore; Santlofer is an artist and author; Esber is an artist. Berry is the Dayton Director of the Tang.

According to DeGroot, “This summer Skidmore’s Tang Teaching Museum and Art Gallery has two exhibitions that feature words as part of the image: Corita Kent and TRANSFORMer. Skidmore also has the New York State Summer Writers Institute on campus in July. A panel with arts and writers talking about words and images seemed like a great idea!”

She continued, “Artists have to consciously avoid the cliché images that come up when we look at a vase, for example, and train ourselves to observe what really is in front of us, or use our own version of a reality, not the standardized one. I am curious what writers think about in choosing words and whether they think about the image a word can bring up in the brain.”

A reception is scheduled at 5:30 p.m. in the Tang lobby, just prior to the panel discussion. Admission is free and open to the public.

The following artists will be featured guests during the art program’s Brown Bag Lunch Series, which is open to Summer Studio Art Program participants. Each talk begins at 12:30 p.m. in Saisselin Art Building, Room 308. Details follow:

Currently in the second year of a residency at the Clay Studio of Missoula, Sandler holds undergraduate degrees in anthropology and ceramics and an M.F.A. in ceramics from Penn State University. In creating work she finds herself “drawn to the space where the visceral and structural meet, to objects with an obscure line between body and architecture.”

Gyscek’s work interrogates the intersections of mortality, domesticity, sexuality, and art. He works primarily in still photo-based media, but also creates sculpture, paintings, and video. He is a philosophy graduate of Holy Cross who holds an M.F.A. degree from Goldsmiths College, University of London. He is currently a visiting assistant professor of photography at Holy Cross. 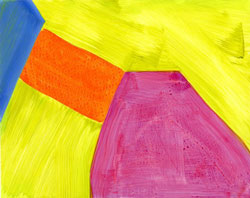 A visiting assistant professor of studio art at Skidmore, where she earned a B.S. degree in art, Palermo teaches foundation design and sculpture. She has exhibited both two-and three-dimensional work in gallery and art venues across the country. She holds an M.F.A. degree from Bennington College.

The exhibition, scheduled July 18 to Aug. 2, features an engaging mix of materials and styles by artists participating in the Summer Studio Art Program. The Schick Art Gallery is located in the Saisselin Art Building. Admission to the reception is free and open to the public.

An award-winning fiber artist, Barbone says, “I have continually used the duality of the hidden and exposed to explore a physical and emotion sense of place.  My sources are derived from immediate surroundings, travels and my own body as self-portrait.” She earned a B.S. degree at the SUNY College at Oneonta and pursued additional study at the Penland School of Crafts before earning an M.F.A. degree at the California College of the Arts.

Daily’s work spans a variety of media and techniques, including painting, photography, and collage. He often combines digital and handmade processes to create new and unique work. In 2011 he won a New York Foundation for the Arts Fellowship in Digital/Electronic Arts for a body of work combining photography, painting, and collage. His most recent exhibition was at the Governors Island Art Fair on Governors Island. Daily earned a B.S. degree at Skidmore and an M.F.A. degree at the University at Albany, State University of New York.

Gratitude for a semester of accomplishments and hopeful days ahead
The Skidmore College community has come together this semester to maintain a safe campus, allowing the College to successfully offer 12 weeks of fulfilling in-person instruction and move forward with major initiatives for the future.
END_OF_DOCUMENT_TOKEN_TO_BE_REPLACED
Nov 24 2020