In early June rising junior Jaya Borgatta '16 and chemistry professor Juan Navea traveled to Valencia, Spain, to attend the Wessex Institute for Air Pollution’s annual conference, where she presented their published paper on the interactions and potential impacts of iron carried by and leached from mineral-based droplets floating in the atmosphere. The chemistry major is now co-writing her third paper on fly ash emitted from coal-fueled power plants in India, Europe, and the US. "Every power plant has a specific climate and ecological impact," explains Navea, "based on the chemical composition of the particles it emits and how they dissolve and release iron into atmospheric water (clouds, fog, rain). Iron is a critical nutrient for ocean phytoplankton, which consume greenhouse gas, CO2, from the atmosphere."

Borgatta, who has been working with the Navea Research Group since the fall semester of her sophomore year, is joined this summer by Schupf Scholars Deborah Kim '18, Katherine Shi '18, and Talia Stortini '18—all rising freshmen doing summer research for the first time and planning to continue this fall. Navea says, "Jaya has become a scientist in every sense of the word, a twice-published scientist no less. And Deborah, Katie, and Talia, as first-year researchers, have already made a great impact in my lab in just four weeks."

"What’s really cool about the research is how one-of-a-kind it is and how our discoveries truly matter," says Kim, who is now rethinking her plan to go to veterinary school. "We don't have a lot of information on fly ash dissolution—there are only a few research groups in the world studying it—so it's exciting every time we get new results."

This year’s Summer Faculty-Student Research Program features 88 Skidmore students working intensively with 41 faculty members on 67 summer-long research projects in a wide range of disciplines. Here are a few (full list of projects below): 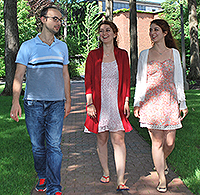 Another project with global implications is government professor Feryaz Ocakli’s "Diverse Paths to Political Power: An Examination of the Career Trajectories of Turkish Political Elites." Ocakli’s main area of research is Islamist parties. He explores how Islamist parties broaden their appeal to non-Islamist voters and succeed in elections. He has also been eager to analyze the educational, occupational, and demographic backgrounds of Turkey’s members of parliament (For more on his research and teaching, go here.) .

Says Ocakli, "I wanted to study the political elites because we don’t actually know who they are and how they got elected to the nation’s parliament, at least not in quantitative terms. I wanted to create a data set to illuminate the forces at work. But I needed a responsible Skidmore student who spoke Turkish to do this work."

No problem. Beginning last spring semester, he hired economics majors Ovgu Bozgeyik '16 and Oyku Bozgeyik '16, twin sisters from Turkey, as his research assistants. Things went so well that they asked if they could continue their data collection efforts and make it part of the summer research program.

Says Oyku, "Though I study economics, this project has helped me realize the effect of politics on a country's state of affairs. When this country is Turkey, everything gets really interesting because we know a lot and a little at the same time as students who come from Turkey. The experience with data collection and analysis will also benefit us after Skidmore when we apply to Ph.D. programs in economics."

This April, Skidmore and its project partner, Gravity Renewables, celebrated the opening of a refurbished micro-hydro plant that we hope will provide up to four megawatts hours of electricity annually to the grid, which Skidmore has agreed to purchase for two decades. The College will get about 18 percent of its electricity from the dam.

Caroline Hobbs '16, an economics and environmental studies double major, spoke at the April ribbon-cutting . She says what most excites her about this "ground-breaking" project is that there are "minimal negative ecological effects" and that the "untapped potential in New York state for more micro-hydro projects is huge."

Hobbs is working this summer with environmental studies professor Karen Kellogg to create an interactive website that she hopes will increase visibility around Skidmore’s renewable energy initiatives and spur on additional micro-hydro projects and partnerships. This fall, Hobbs and Kellogg also plan to co-author a paper and do a presentation on the history of the dam.

Says Hobbs, "I hope the project will help more students recognize that Skidmore is truly on the cutting-edge in terms of renewable energy policy and action and take greater pride in what our school is all about."

Too old for college?

Lopez, who enjoys analyzing sports data and has written for Sports Illustrated and Hockey News, is well aware of studies indicating that athletes born in the first part of the calendar year often outperform the rest of their age group because they get a head start. It surprised him, though, that similar statistical analyses had not been done on college students. Why not study Skidmore data?

He says, "We're looking at measures like graduation status, GPA, and SAT scores for students, specifically wondering if the relatively older students have shown better or worse performance, and also hoping to identify other determinants of student success." Markiewicz isn’t sure what she wants to do after college but knows she enjoys applied math, so she jumped at the opportunity to test-drive these statistics. Furman plans to be an actuary, so an experience with statistics and probability is a great fit for her future.

Describing his work with Sheppard on asparaginyl-tRNA formation in bacilli, Miles Calzini '16 explains, "In the bacterium Bacillus subtilis, I'm getting rid of a gene that's responsible for the correct attaching of the amino acid asparagine to its transfer RNA. The organism has another way to do this attaching. We're going to see how this removal, called a knockout, affects growth of the bacterium, since it will have to rely on its alternate pathway."

Miles is teaming up with Julia Erskine '17, a rising sophomore who presented a poster on aspartyl-tRNA synthesis in Bacillus anthracis, a pathogenic relative of B. subtilis, at the American Society for Biochemistry and Molecular Biology in Boston in March. With Sheppard and previous Skidmore undergraduate co-authors, they plan to submit an article to the journal Nucleic Acids Research later this summer on the dual routes for asparaginyl-tRNA formation these bacteria. They are joined this summer by Ruth Allard '16, who hopes to go to medical school, and David Sweezey '17, who is aiming for graduate school.

After a year and a half doing research with Sheppard, Erskine, who plans to become a physician’s assistant, is pleased with her progress. "Not only am I confident and more competent in lab, but I have learned how to troubleshoot when things don't work out (which is often). I am no longer reliant on lab manuals or cookie-cutter procedures. I am able to think for myself, and think like a scientist."

46. Mulligan, Scott, Management and Business and International Affairs, Diggs, Makeda '17, Surveillance studies in the 21st century: A study of GIS and surveillance technologies for classroom use and museum exhibition, 5-week-1, Marlene Oberkotter Fowler

A front-row seat to history in London
Skidmore London First-Year Experience students find themselves at the center of a remarkable moment in history following the death of Queen Elizabeth II and accession of King Charles III.
END_OF_DOCUMENT_TOKEN_TO_BE_REPLACED
Sep 16 2022

The start of a new century
Skidmore College is marking its College Centennial with a yearlong celebration of its history and reflections on the journey ahead.
END_OF_DOCUMENT_TOKEN_TO_BE_REPLACED
Sep 14 2022