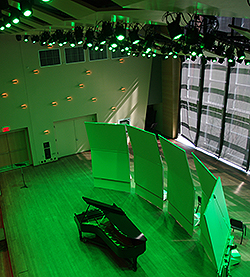 The sustainability spotlight is shining anew on the Zankel Music Center, where a lighting retrofit in the Helen Filene Ladd Concert Hall is slashing energy consumption.  The project, led by Shawn DuBois, the Zankel’s technical director, swapped incandescent bulbs for much more efficient LEDs, cutting the electricity used by 86 percent, even while improving the lighting design.

DuBois says Skidmore is one of few colleges to have such a system, “but within five years most every theater will be using this.”

Along with consuming less energy, LEDs produce less heat. Under the old hot lights, the concert hall needed cooling even in the winter, but the new lights will draw less on the already very green geothermal system that heats and cools Zankel and nearby buildings. Also, LEDs last for at least 70,000 hours, whereas incandescent bulbs burn out after about 1,000 hours, so instead of changing bulbs every few weeks, DuBois says he won’t need to change the LEDs for years.

The 112 LEDs over the stage bathe it with light that DuBois calls “simply amazing”—better balanced, easier for musicians reading music, and more engaging for audiences.  For Emily Przysinda ’15, the RGB-plus-amber capabilities of the LEDs perfectly complemented her senior recital, “Colors of Sound.” She says, “Colored lights set the mood for each song and brought the recital to life.” And Jarred Green ’15 recalls a show when the stage lights morphed from white to rainbow “and the audience went insane.”

"All in" for Skidmore
As students, staff and faculty prepare to gather together on campus for the start of the fall semester, all members of the Skidmore community must make a personal commitment to following all health and safety protocols.
END_OF_DOCUMENT_TOKEN_TO_BE_REPLACED
Aug 5 2020

Beatlemore Skidmania 2020 to be presented virtually this fall
Planning is now underway for the popular annual concert. This year, students are invited to re-imagine any song in The Beatles’ catalog.
END_OF_DOCUMENT_TOKEN_TO_BE_REPLACED
Jul 29 2020
More News