Françoise Mouly, art editor at the New Yorker magazine, stayed up late on Sunday to prepare her "Blown Covers" presentation to deliver at Skidmore the following day at this year's Fox-Adler Lecture. But the self-deprecatory Mouly admitted that she had not prepared for Monday morning's Manhattan traffic jams, exacerbated by President Donald Trump's appearance at the United Nations (though it wasn't the first time Trump made her life difficult).

Soon Mouly had abandoned her cab and, with no subway stop in sight, hopped on a city bike and pedaled to the train station, where she sprinted to catch the Albany train in the nick of time. Her account gave the distinct impression that she had rather enjoyed this travel challenge. The author of Blown Covers: New Yorker Covers You Were Never Meant to See, Mouly has worked with myriad artists to create the magazine's signature covers every week for more than 20 years. It's no surprise that she possesses the gifts of preparation, flexibility and humor. She also brings cultural depth and a keen artistic eye. Recipient of the Légion d'honneur, her native France's highest honor, along with the Smithsonian's 2015 Ingenuity Award and other accolades, she is at once serious and funny—and adept at using the funny to uncover the truths underlying the serious. 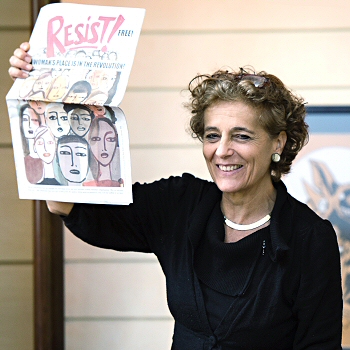 When she started at the New Yorker, Mouly recalls, she found inspiration in its 1920s covers that poked fun at upperclass fuddy-duddies, Jazz Age flappers, pretty much everybody. One showed alarm on a bride's face as her limousine passed a married couple on the Lower East Side dwarfed by a gaggle of kids. Did the bride see her real future? Was she showing contempt? As with all New Yorker covers, much of the meaning is in the eye of the beholder, since no text accompanies the image. Says Mouly, "These covers communicate in a way that it is not possible to accomplish in words. It's communications art."

Professor Deb Hall, whose "Communications Design II" class had a special Q&A session with the guest lecturer, says she appreciates that Mouly sees art as an "important voice that portrays many views of an issue at once without taking a stand, in contrast to the linearity of writing." Hall was struck by Mouly's experience of receiving emails from readers on opposite sides of an issue, both camps equally incensed about a position they believed a New Yorker cover had espoused.

Mouly showed draft cover images that were tweaked as artist and editor collaborated to get them just so—sometimes a small thing such as making the skyline less prominent in a drawing of a couple attaching a love lock to the Brooklyn Bridge while a city worker is busy getting rid of others. Jordana Dym, history professor and director of the Moore Documentary Studies Collaborative, says, "It was important for students to see that this collaborative process helps make the case that form and content may start as one person's inspiration but can improve with critique and a willingness to refine. We tend to think of artists, writers, and documentarians as authors, working alone on a vision, and Mouly highlighted how such work benefits from critique and honing the vision."

Mouly's advice to students interested in following in her footsteps? Be curious, ask questions, never stop learning and "one thing will lead to another. You can't follow a set path." She studied architecture in Paris but didn't love it, moved to New York City for a "sabbatical year," found she enjoyed the tactile quality of printing, produced her own magazine, took a printing class, purchased a printing press and started her own business in a Soho loft.

Just as important as flexibility, Mouly adds, is the "primacy of ideas. You can be very good at illustration but you have to have something to say. You should be driven by ideas." Put another way, "There is virtue in what you care about. For me, it's a privilege to be a culture warrior." Along with New Yorker materials, Mouly brought copies of Resist, a cartoon newspaper that she and daughter Nadja Spiegelman created after Trump's election victory.

E.B. Sciales '19, one of Hall's design students, has admired Mouly since age 12, when her mother bought her a copy of Classic Children's Comics, edited by Mouly and husband Art Spiegelman, best known for his Pulitzer-winning graphic novel Maus. Sciales chatted with Mouly about her background as a designer and architecture student, her love of printing and her admiration for books as physical objects.

For English professor Catherine Golden, who coordinates the Fox-Adler Lecture, Mouly's emphasis on creating artwork by hand and producing it on her own printer fit perfectly with the essence of the lecture series, linked as it is with a collection of 19th-century books given to Skidmore's Scribner Library. Golden says, "Mouly is aligned with the caricaturists and book artists of the illustrious 19th century, ranging from Cruikshank to D.G. Rossetti to William Morris, who were not only artists but etchers and, in some cases, printers as well."

When Sciales handed over her copy of Classic Children's Comics and told Mouly that it kick-started her interest in comics, Mouly signed the book "To E.B., with very best wishes now that you are all grown up." Said the delighted Sciales: "Her visit certainly motivated me to be unafraid to experiment and learn, to plunge head-first into the things I am passionate about and to let life take me to places I never expected."

Skidmore presents StartUp Skidmore
The Feb. 17-19 workshop and competition — open to all Skidmore students from all majors — will enable participants to fine-tune their business pitches and develop a prototype for their own creative products and ideas.
END_OF_DOCUMENT_TOKEN_TO_BE_REPLACED
Jan 20 2023

Four seasons of Skidmore: 2022 in review
2022 saw the return of many beloved traditions to campus and marked the start of a yearlong celebration of the College’s Centennial, giving us all reason to pause and reflect on Skidmore’s past, present, and future.
END_OF_DOCUMENT_TOKEN_TO_BE_REPLACED
Dec 15 2022
More News