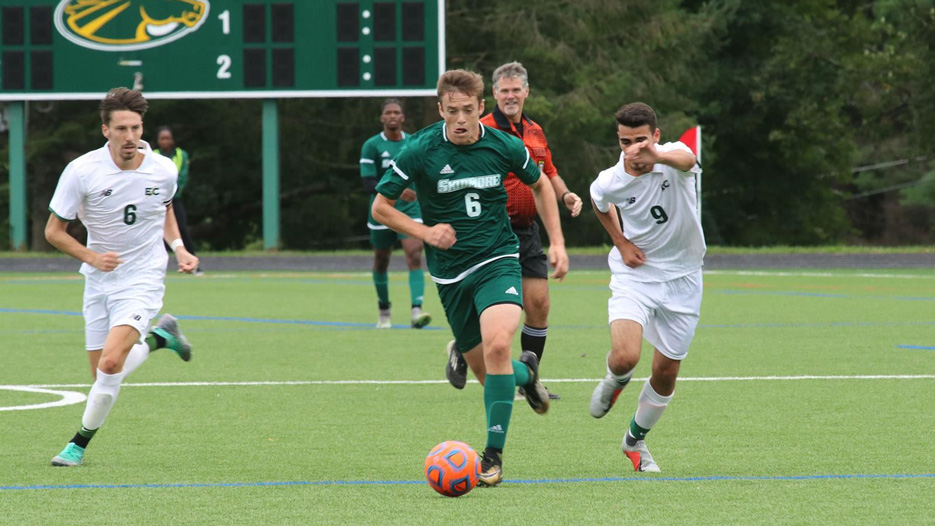 David Braman '20 converted on the penalty kick for the eventual game-winning goal in Skidmore men's soccer's win against Lasell College on Saturday, August 31.

In a dominating display, men’s soccer started its season with a weekend sweep and a new record, thanks to junior forward Stanley Langyintuo’s remarkable four goals in one game.

Women’s soccer secured a season-opening 4-1 victory over Curry College and a 2-0 victory in non-league action with William Patterson University.

Women’s field hockey fought hard for a mid-game tie, but a third quarter shot from Saint Joseph’s College of Maine ended as a loss for the T-breds.

And on the road, Women’s volleyball opened the 2019 season powering through a rocky start for an overall 2-1 finish in the Springfield College Invitational.

Check out the game recaps below. 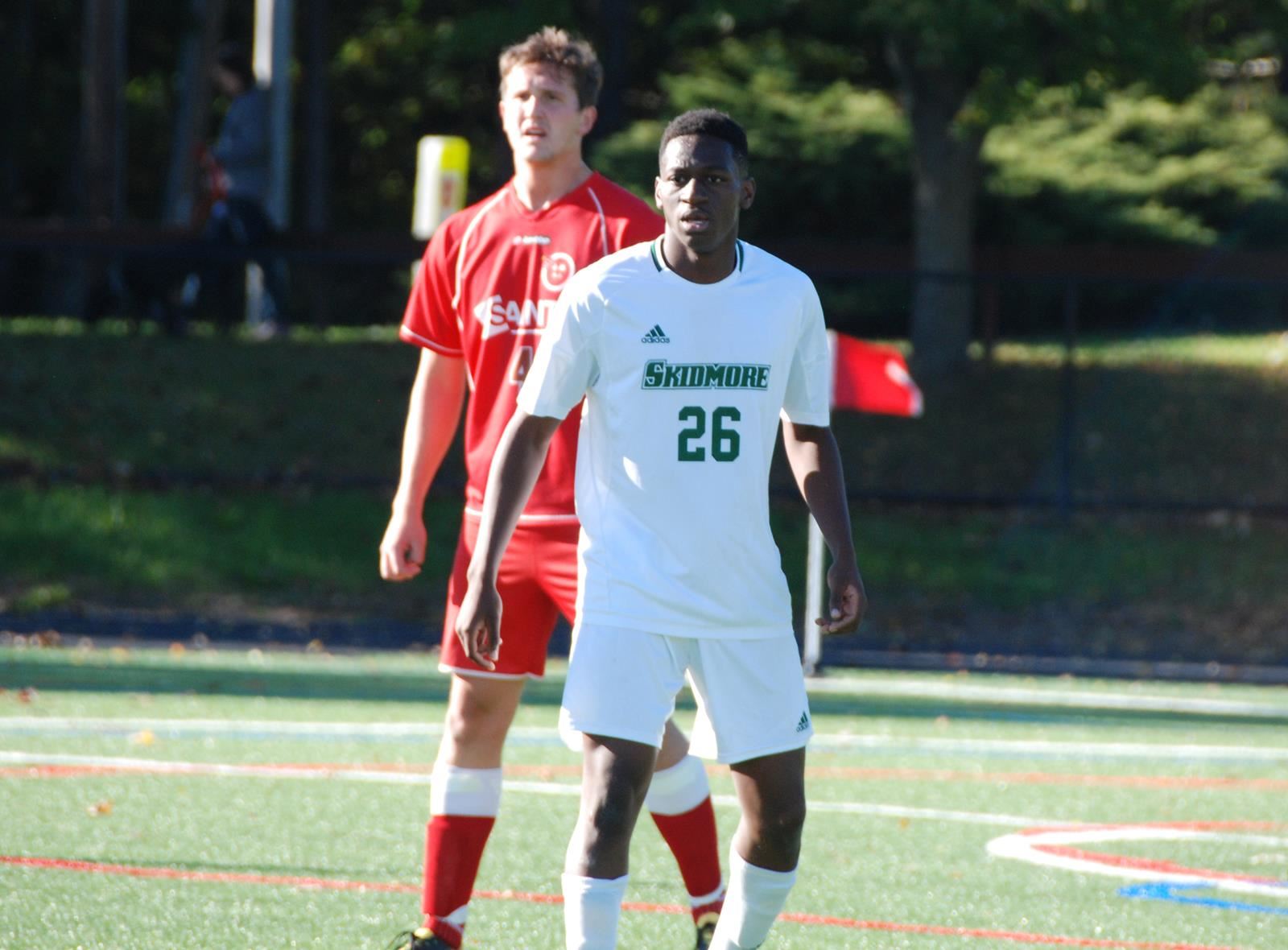 Junior forward Stanley Langyintuo made quick work of Keuka College, scoring four goals — a Skidmore record — and powering men's soccer to a 4-1 victory over the Wolves in the 2019 season opener at Wachenheim Field Friday evening.

This was the second time in three seasons the team has opened the season with a win. And they didn’t stop there — a pair of late goals finished off their weekend sweep, defeating Lasell College 4-1 in non-league action Saturday. 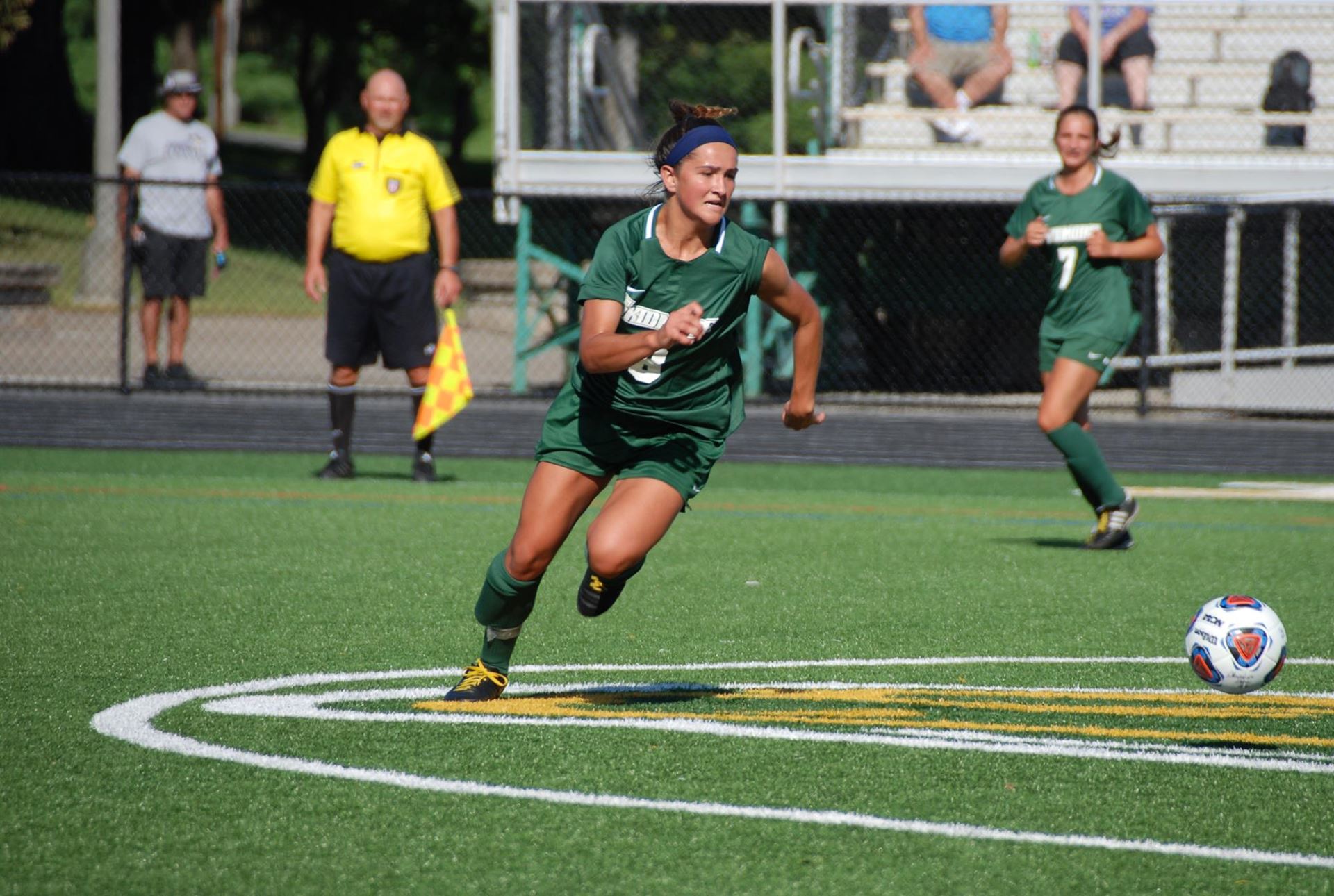 A balanced scoring effort powered the women's soccer team to a 4-1, season-opening victory over Curry College at Wachenheim Field on a sunny Friday afternoon.

The momentum continued through Saturday’s non-league game against William Patterson University. The Thoroughbreds outshot the Pioneers by a 14-5 margin and came through with a 2-0 victory.

This is the fourth time in a row the team has kicked off its season with wins. 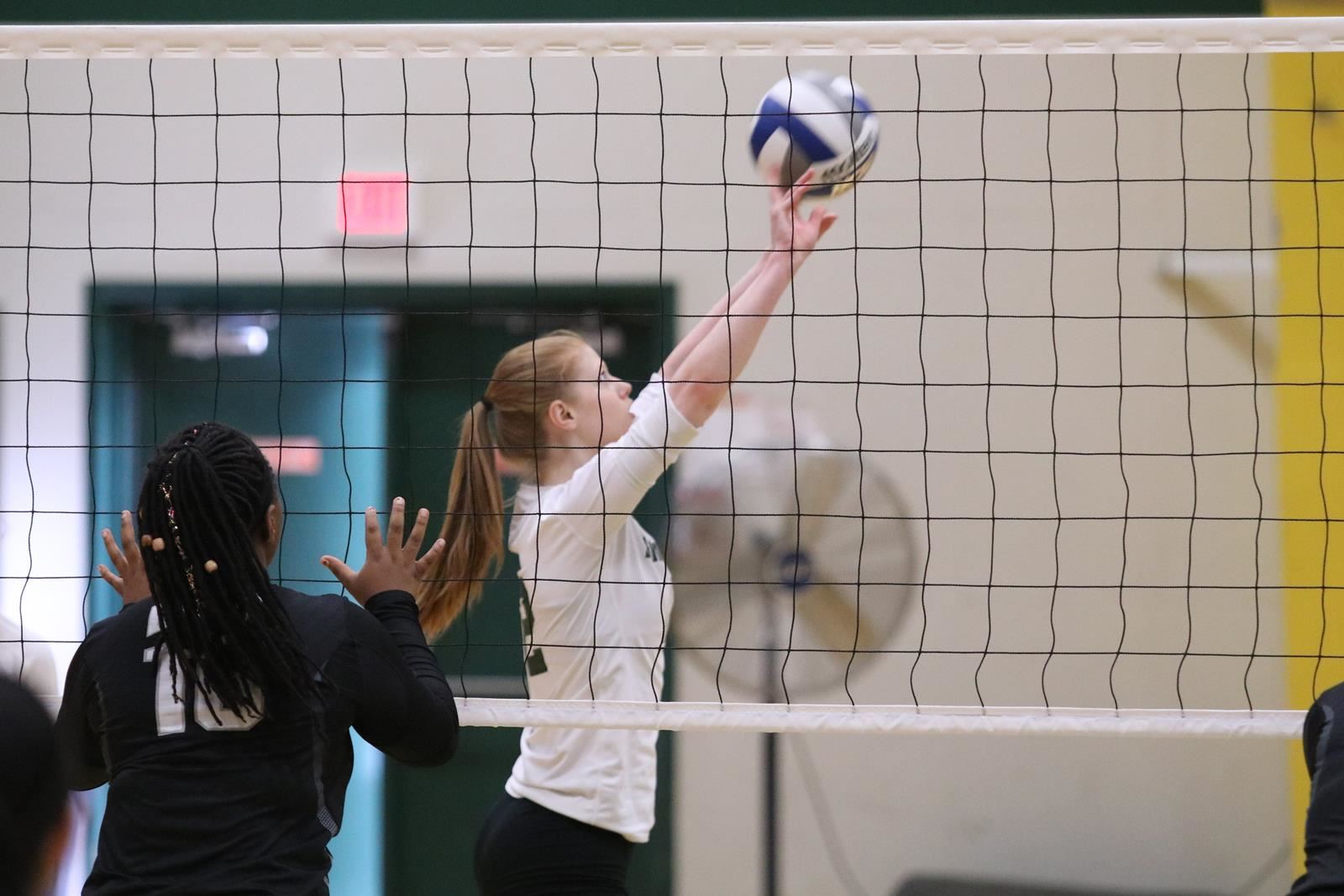 The volleyball team dropped a five-set marathon to Keene State College (27-25, 19-25, 25-12, 11-25, 8-15) in the first match of the Springfield Invitational Friday night at Blake Arena. The team shook off the opening loss to work through two wins on Saturday, 3-2 over Montclair State and 3-0 over Westfield State, for an overall 2-1 finish in the Springfield College Invitational. 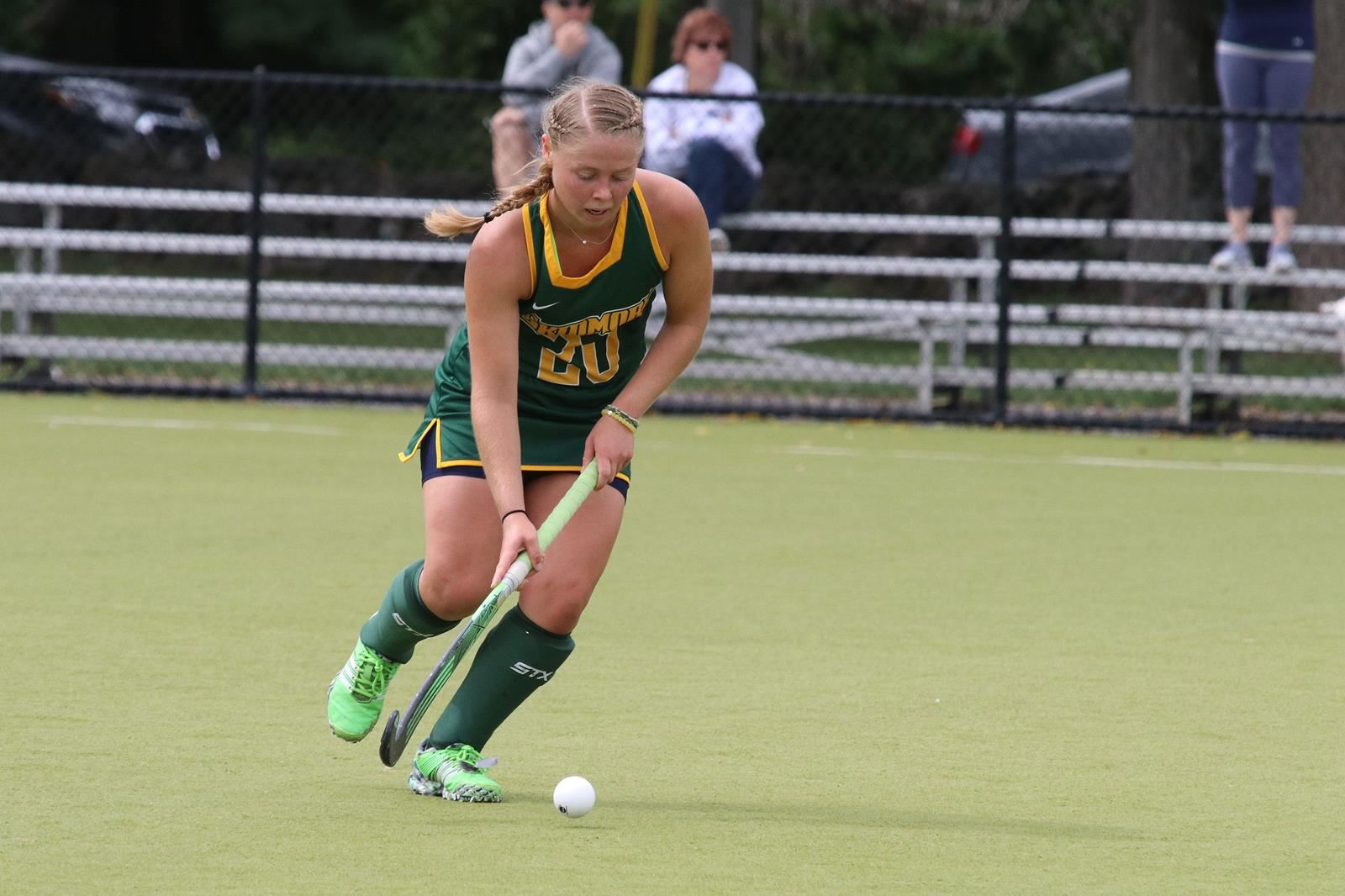 The Skidmore College field hockey team opened the 2019 season with a 2-1 loss to Saint Joseph's College of Maine Saturday afternoon at Wagner Park.

The Monks scored first, but Skidmore didn't take long to tie after Sarah Winters rifled one from 14 yards out off a corner at 25:26. The eventual Saint Joseph game-winner came early in the third quarter when Saint Joseph’s long dump-in snuck through the Thoroughbred defense at 33:20. 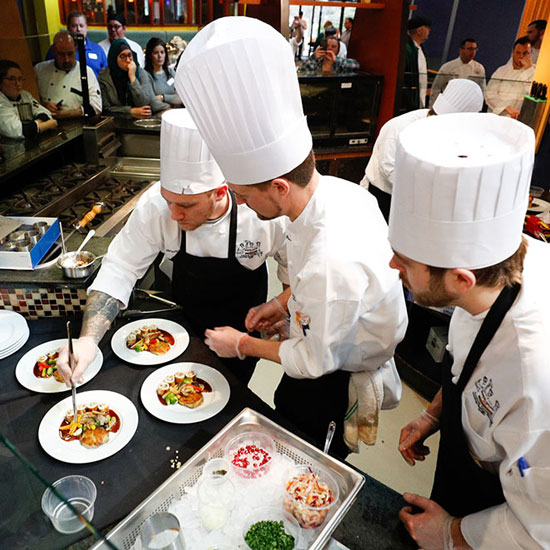 Skidmore culinary team wins gold again
What does it take to be a seven-time champion of an American Culinary Federation-sanctioned cooking competition? Members of Skidmore’s Dining Services team say lots of practice and a healthy serving of creativity.
END_OF_DOCUMENT_TOKEN_TO_BE_REPLACED
Jan 13 2020 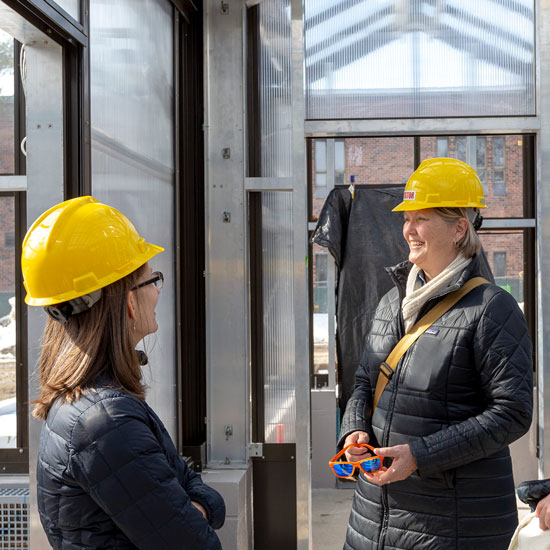 The Center for Integrated Sciences North Wing -- by the numbers
What goes into building a new science center? Take a look at the staggering figures behind the first phase of the largest, single academic initiative in Skidmore's history.
END_OF_DOCUMENT_TOKEN_TO_BE_REPLACED
Jan 7 2020 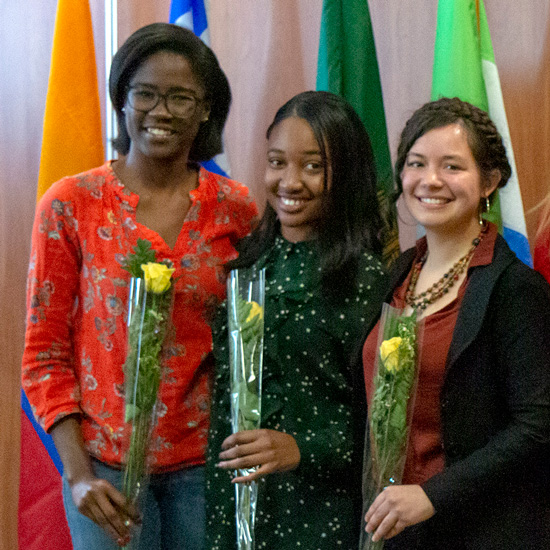 Davis UWC Scholars enrich Skidmore with global perspectives
A recent alumna reflects on the connections and inspiration she found as a member of the international scholarship program.
END_OF_DOCUMENT_TOKEN_TO_BE_REPLACED
Jan 2 2020
More News