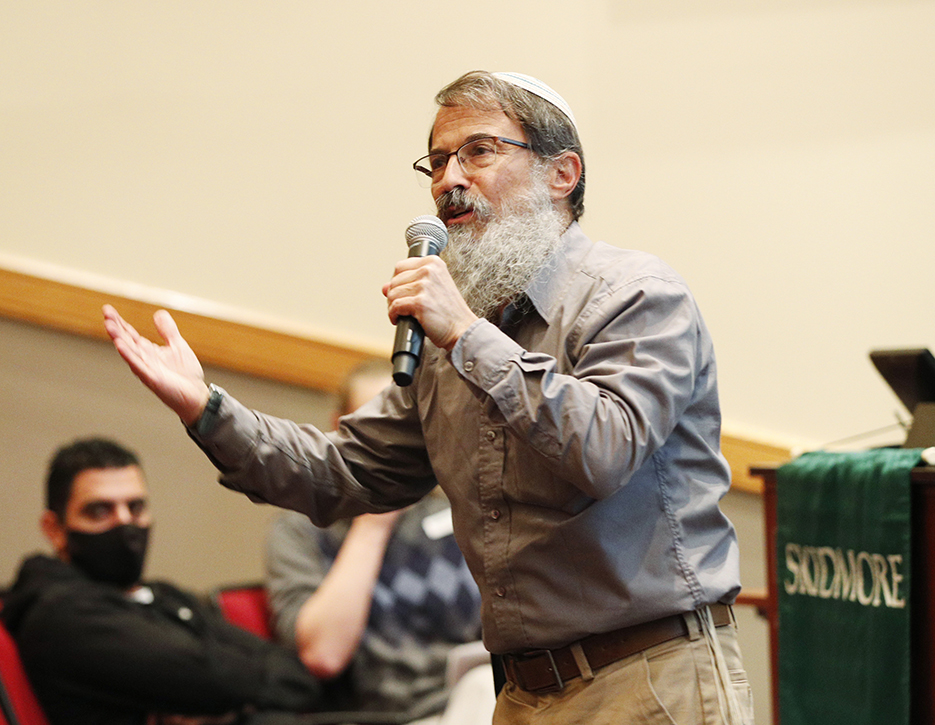 Rabbi Hanan Schlesinger speaks about his involvement in Roots/Shorahim/Judur during “Two Truths in One Heart; Two Peoples in One Land" on Nov. 17 in Gannet Auditorium. His partner in the dialogue, Shadi Abu Awwad, can be seen in the background. (Photo: Sarah Condon-Meyers)

Palestinian and Israeli peace activists shared personal stories about their own backgrounds, discussed their initial reluctance to engage the other side, and expressed their shared conviction that lasting reconciliation could only be achieved through dialogue during an event at Skidmore College.

Shadi Abu Awwad and Rabbi Hanan Schlesinger discussed their involvement in Roots/Shorahim/Judur, a unique collaboration of Palestinians and Israelis, during the Nov. 17 event in Gannett Auditorium. Both speakers stressed the need for mutual recognition and dialogue in a territory that both sides claim as their own.

“At Roots … we began to understand that most Israelis and most Palestinians go to sleep at night dreaming the other side is going to disappear,” Schlesinger said. “Until we build recognition, trust, and empathy for the other side and the fullness of their identity, there will never been peace.”

Schlesinger said Roots’ work was not inherently political in nature but aimed to create groundwork that can make a future political settlement possible. Both activists also stressed the group’s uniqueness in working with both Israeli settlers and local Palestinians in the West Bank: Schlesinger is a settler, and Abu Awwad grew up there.

At the same time, Schlesinger and Abu Awwad also acknowledged how difficult it is to listen to the perspective of the other side and engage in meaningful dialogue.

Parker Diggory, director of religious and spiritual life at Skidmore, said the event, “Two Truths in One Heart; Two Peoples in One Land,” was part of a series of ongoing conversations on campus about the Israeli-Palestinian issue. Skidmore students also had the opportunity to participate in small group meetings with the speakers.

The event was sponsored by Skidmore's Racial Justice Initiative and the Office of Special Programs’ Jacob Perlow Event Series in collaboration with the Office of Religious and Spiritual Life, the Office of Student Diversity Programs, and The Center. 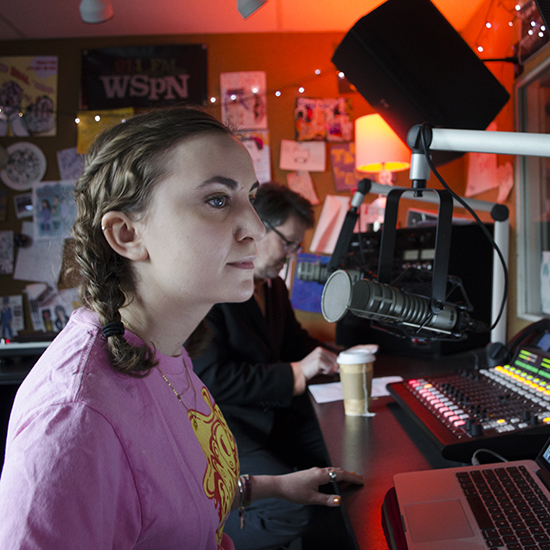 Inspiring creative careers: The Tang Teaching Museum
Over the past two decades, the Tang Teaching Museum and Art Gallery has provided students with valuable work experiences and extraordinary access to art, artists, and ideas that supported careers both inside and outside the arts.
END_OF_DOCUMENT_TOKEN_TO_BE_REPLACED
Jan 11 2022 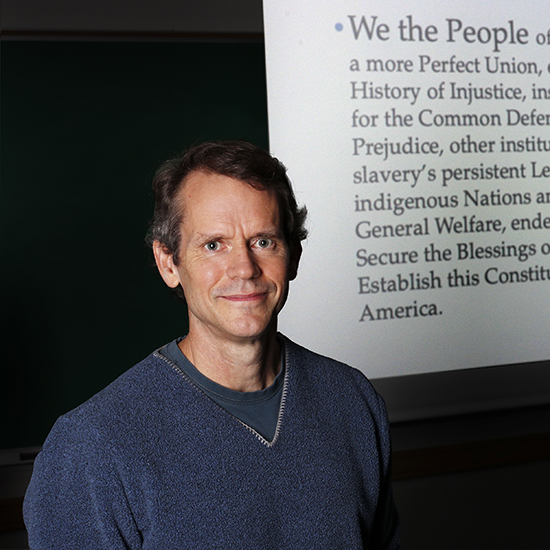 First-year seminar inspires book that re-imagines U.S. Constitution
Political Science Professor Beau Breslin says his latest book, imagining what might have been if each generation in American history had written its own constitution, grew out of a first-year Scribner Seminar and a collaborative research project with Skidmore students.
END_OF_DOCUMENT_TOKEN_TO_BE_REPLACED
Jan 6 2022
More News