A better way to exercise

With the help of 57 volunteers who hit the Skidmore gym, track and playing fields just about every morning for 16 weeks, Skidmore College exercise scientist Paul Arciero has generated international attention with a study that challenges conventional thinking about exercise.

Originally published in The Journal of Applied Physiology, the study — which showed that the quality of your exercise and diet regimen is more important in losing weight and maintaining optimal weight and fitness — has been picked up by numerous news organizations and health-oriented Web sites, including Health.com,  Shape,  China Radio International,  Time.com,  Science Daily,  Prevention, and  Outside. 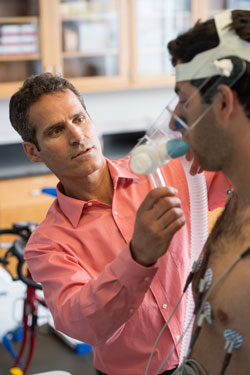 Arciero's team — which included six Skidmore students who served as exercise monitors and mentors — showed the clear benefits of a multi-dimensional exercise regimen that includes resistance exercise, interval sprint exercise, stretching (including yoga or pilates), and endurance exercise. They also demonstrated that consuming moderate amounts of protein — 60 grams daily — produces a decrease in total and abdominal fat, an increase in lean body mass, and optimal levels for blood pressure, blood glucose, and insulin.

For Arciero, the study, which he conducted between 2010 and 2012, was the culmination of research he has conducted and published over the last 20 years in an attempt to identify the most effective lifestyle strategies to improve health and physical performance. To make the regimen easy for the public to remember, Arciero has coined the acronym, “PRISE.” The “P” stands for protein, the “R” stands for “resistance,” the “I” stands for “interval,” the “S” stands for stretching, and the “E” stands for endurance.  (More details.)

Among those volunteering for the study was Saratoga County District Attorney James A. Murphy III. Up to that time, he had been doing all of his exercising on an elliptical machine — a routine he notes was “monotonously going nowhere.”

Today he’s a PRISE convert. He runs in the Fleet Feet distance program, rows with the Saratoga Rowing Association, practices yoga, and regularly trains with weights.

“I feel better, have more energy, and have a totally different lifestyle,” he says. “Had I not experienced the changes myself, I would not have believed how much the PRISE regimen can help just about anyone lose weight, boost energy and increase their overall health.”

The study supports a rethinking of current assumptions about exercise, says Arciero, a  member of the advisory board of the American Heart Association and a fellow of both the American College of Sports Medicine and the Obesity Society.

“It’s very difficult to just lift weights, or only do the treadmill or the elliptical machine and be healthy,” says Arciero. ”Your exercise regimen needs to encompass as much of what makes you a fully integrated living person as possible.”

“It’s not about simply doing more exercise,” he continues. “It’s about doing the appropriate range of exercises and activities that most effectively promote health and fitness.”

Photo essay: Excited to be back on campus
The entire Skidmore community is enjoying the start of a new academic year filled with dynamic courses, athletics competition, beloved traditions, and — most of all — the return of all students, staff, and faculty to campus.
END_OF_DOCUMENT_TOKEN_TO_BE_REPLACED
Sep 22 2021

Thoroughbreds triumphantly return to competition
Our fall athletes have been waiting a long time to be back on the field after the 2020 season was canceled. Without missing a beat, they've returned in full force and are racking up the wins.
END_OF_DOCUMENT_TOKEN_TO_BE_REPLACED
Sep 15 2021