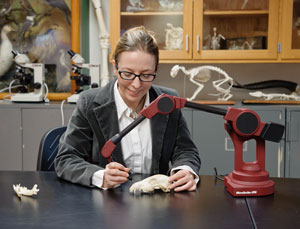 When did dogs first become domesticated? A sophisticated new 3D fossil analysis by biologists Abby Grace Drake, visiting assistant professor of biology at Skidmore, and Michael Coquerelle of the University Rey Juan Carlos contradicts the suggested domestication of dogs during the late Paleolithic era (about 30,000 years ago), and reestablishes the date of domestication to around 15,000 years ago. Their findings were published Feb. 5 in Scientific Reports, an online journal of the Nature Publishing Group. (Link here: http://nature.com/articles/doi:10.1038/srep08299  )

Whether dogs were domesticated during the Paleolithic era, when humans were hunter-gatherers, or the Neolithic era, when humans began to form permanent settlements and take up farming, is a subject of ongoing scientific debate. Original fossil finds placed dog domestication in the Neolithic, during the time when humans began to form permanent settlements and started to farm. However, genetic analyses have often contradicted this date, claiming that dogs were domesticated much earlier. Recent fossils found in Russia and Belgium have been used as evidence for dogs being domesticated as early as the late Paleolithic, when humans were hunter-gatherers. Yet these phylogenetic analyses of modern and ancient dogs as well as the identification of fossil canids either as dog or wolf can only make sense if there are accurate methods of classification based on morphological data. So far these methods have not existed. 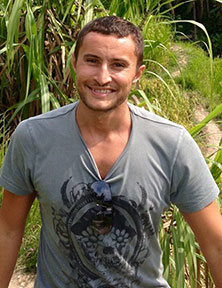 In the new study, lead authors Drake and Coquerelle proposed a 3D method for measuring the canid skulls and re-assessed the Paleolithic fossils from Russia and Belgium. When they compared the form of these canids to that of modern and ancient wolves and dogs from North America and Europe, they were surprised to find that these fossils, once presumed to be dogs, were in fact wolves.

Drake explained, “Scientists have been eager to put a collar on the earliest domesticated dog. Unfortunately their analyses weren’t sensitive enough to accurately determine the identity of these fossils. The difference between a German shepherd skull and a wolf skull is subtle – you need to measure it in 3D to reliably tell which is which – and the same is true for these fossils.” Their new study includes 3D interactive figures and scans of the skulls, which help to clearly show what separates the wolves from dogs. “The difference between a wolf and a dog is largely about the angle of the orbits: in dogs the eyes are oriented forward, and a pronounced angle, called the stop, exists between the forehead and the muzzle. We could tell that the Paleolithic fossils do not have this feature and are clearly wolves,” said Coquerelle. 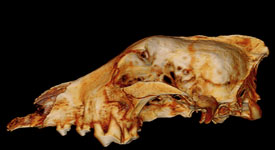 The Goyet Fossil from the Paleolithic era that Drake and
Coquerelle determined is actually a wolf.

The 3D measurements provide far more accurate results than the traditional calipers that scientists have used for this type of analysis. Drake has used one of the first 3D digitizers at the Smithsonian Institution and found it especially helpful in determining subtle differences in the skulls of dogs and wolves. In her work to date she has measured 677 dogs representing 106 breeds.

And while dogs may have been domesticated 15,000 years ago, it was a relatively short time ago – a mere 200 years or so – when the first breeds were named, breed clubs were established, and breed standards were introduced. Since then, “We have seen an explosion in dog diversity,” Drake said. The research she and Coquerelle just published adds to growing knowledge about man’s best friend. “People are inherently interested in dogs and we have influenced their evolution,” Drake said, adding, “They are such a part of our lives. Knowing when domestication of dogs took place in the course of human history is important to our story and to theirs.”

Wrapping up a remarkable academic year
The Skidmore community is marking the end of an academic year that has been filled with unique arrangements but also fantastic achievements, special moments and exceptional creativity.
END_OF_DOCUMENT_TOKEN_TO_BE_REPLACED
May 4 2021
More News