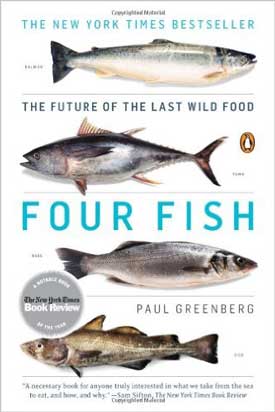 A James Beard Award winner and regular New York Times contributor, Paul Greenberg will discuss seafood sustainability at Skidmore at 6 p.m. Thursday,  Dec. 10, in Davis Auditorium of Palamountain Hall. Earlier that day he will meet with students in ecology and marine biology courses. The 6 p.m. lecture is free and open to the public.

Greenberg’s 2011 best-seller Four Fish: The Future of the Last Wild Food and last year’s American Catch: The Fight for our Local Seafood examine modern exploitation of ocean resources. His Skidmore talk will cover wild fishing and fish farming, our changing relationship with seafood, and the implications for the health of oceans and humans alike.

An avid fisherman and rigorous reporter, Greenberg wants to alert Americans to what’s been going on behind the scenes of supermarket fish counters: “while 91 percent of the seafood Americans eat is foreign, a third of the seafood Americans catch gets sold to foreigners.” And within the next 10 years, farmed will overtake wild-caught in the marketplace—a “food revolution” that Greenberg compares to the world-changing shift of early hunter-gatherers beginning to domesticate mammals for food. Given the ecological harm caused by much current fish-farming, he argues, we must change our habits and tastes to ensure that food fish can thrive both in farms and in the wild.

Greenberg has earned major grants for his fiction and nonfiction, his essays have been published internationally, and he has appeared on public radio, TV news, and other media. His work has taken him from Alaska to Greece and from the Long Island Sound to the Mekong Delta.

"All in" for Skidmore
As students, staff and faculty prepare to gather together on campus for the start of the fall semester, all members of the Skidmore community must make a personal commitment to following all health and safety protocols.
END_OF_DOCUMENT_TOKEN_TO_BE_REPLACED
Aug 5 2020

Beatlemore Skidmania 2020 to be presented virtually this fall
Planning is now underway for the popular annual concert. This year, students are invited to re-imagine any song in The Beatles’ catalog.
END_OF_DOCUMENT_TOKEN_TO_BE_REPLACED
Jul 29 2020
More News