"Students take away a basic understanding of the multiple dimensions of today's agriculture and food system."

"Students will learn to understand 'nature' as a socially constructed concept."

"Students will acquire an understanding of soil properties and the consequences of policy decisions related to soil and water."

These goals are from the syllabi for three courses: "Politics of Food, Agriculture, and Social Justice," "Literature and the Environment" and "Soil and Watershed Science for a Crowded Planet." They're among scores of courses this fall that either focus or touch on environmental, economic or other sustainability issues—and that help place Skidmore high in several college rankings. 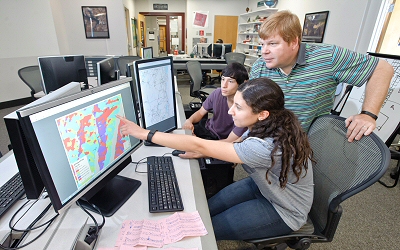 Kurt Smemo, at right, works with students in the lab.

"I love teaching this," says Nurcan Atalan-Helicke of her food-politics course. "It draws students from bio, anthro and other majors outside environmental studies and sciences, and it changes every year as new research comes out and new issues make the news." Lately her class is considering the commodification of food in global industrial systems. Genetically modified seeds, for example, are controlled by the agribusinesses that produce them—farmers must sign contracts not to collect seeds from their crops, so they must buy them new for each planting season. Pricing and labor costs are another topic: A spike in food prices if workers' wages were increased "is a myth," she says. "Research shows that the bill for, say, a hamburger, would rise by only a few pennies, and companies' profit margins would shrink only a tiny amount."

Michael Marx, who teaches environmental lit, also varies his syllabus from semester to semester. This fall it includes "Nature" by Luther Standing Bear, Prodigal Summer by Barbara Kingsolver, and John Muir's My First Summer in the Sierra. Of course Thoreau's Walden is on the list too, but so is "Tales from a Black Girl on Fire" by poet Camille Dungy. The idea, Marx says, is for students "to examine different (and competing) understandings of nature" and the different perspectives and writing styles used by various writers to present and interrogate ideas of nature. 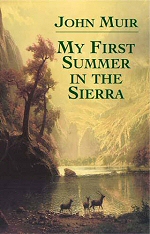 Science is at the core of Kurt Smemo's soil-and-water course, and of the ecosystem analysis course on forests, which he's also teaching this fall. Soils students are studying the chemistry and other aspects of the soils in the Saratoga region. "Also they're learning how many millennia it takes for soil to develop and how quickly it can be degraded or destroyed," he adds. His forest course is focusing on plant communities in Skidmore's North Woods, using techniques such as measuring tree-trunk girths and counting understory vegetation, setting out baskets to collect leaf-fall, counting individuals and species in 15-meter–diameter plots, and analyzing organic matter in the forest floor. The studies "include ecosystem disturbance too, like soil compaction and invasive species," he adds.

In the agriculture course, Atalan-Helicke's students are realizing that "all farmers on earth today are reliant on markets in some way," she says. "Even subsistence farmers must buy seeds or fertilizer or equipment, or must sell something to buy other goods. And all the prices are influenced by global market forces far beyond their farm." Moreover, these market forces change entire landscapes and ways of life, such as in New Zealand, where sheep ranches have been making way for huge dairy-cow operations supplying mozzarella cheese for pizza in China. 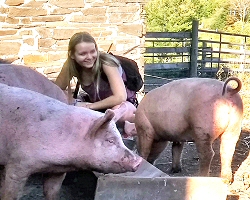 Students from the food-politics course visit the
nearby Longlesson Farm.

Marx says one of his goals is "to awaken my students to ways of understanding their environment through a literary artistic perspective." Since they're often surprised by the religiosity of various nature writings, he sometimes starts the course with Genesis and then early-modern poets such as Andrew Marvell—that way, he says, "by the time the students encounter John Muir, they are better prepared for the spirituality of his nature writing."

As for Smemo's science students, they're often surprised to realize how little fertile soil the Earth contains. He says, "A lot of humans live in areas that aren't very supportive of agriculture, and to this day poor soils and water insecurity are factors in many conflicts." The fact is, Atalan-Helicke says, "The world produces more than enough food for every person on the planet, yet millions go hungry. These are political and social problems more than agricultural ones. Issues of food security and food sovereignty are very complex."

In his lit course, Marx requires students each week to write at least one commentary and respond to at one other in the shared class blog, to practice both "reflecting on and responding to our readings" and "writing to an informed, real audience." In addition, he has each student post drafts of formal papers for discussion and critique, "to sharpen your skills as a critical reader of analytical writing." Smemo's soil and watershed students also write research proposals, which include study designs, feasibility and project plans. And his forest students collect the same data but break into teams to analyze and crunch numbers. He says, "It helps them see how scientific results can vary, and how gray areas generate new questions and more science."

A food-politics assignment often teaches a similar lesson. In choosing a product and mapping its path from origin to store shelf, many students find that production, shipping and processing information is very spotty or is hidden as a "trade secret." Says Atalan-Helicke, "It's eye-opening for students to learn how much we can't learn about our food!"

Other sustainability-related courses range from a first-year Scribner Seminar on notions of the garden and the forest (taught by a religious studies professor), to business ethics and anthropology offerings, to biology and other lab studies. A recent count showed that 21 academic programs (more than half of Skidmore's total) offered a combined 126 such courses. That penetration throughout the curriculum sets Skidmore apart from many of its peers and helped it earn a silver rating this year through the Association for the Advancement of Sustainability in Higher Education—proof that Skidmore not only lives green but thinks green.

"All in" for Skidmore
As students, staff and faculty prepare to gather together on campus for the start of the fall semester, all members of the Skidmore community must make a personal commitment to following all health and safety protocols.
END_OF_DOCUMENT_TOKEN_TO_BE_REPLACED
Aug 5 2020

Beatlemore Skidmania 2020 to be presented virtually this fall
Planning is now underway for the popular annual concert. This year, students are invited to re-imagine any song in The Beatles’ catalog.
END_OF_DOCUMENT_TOKEN_TO_BE_REPLACED
Jul 29 2020
More News