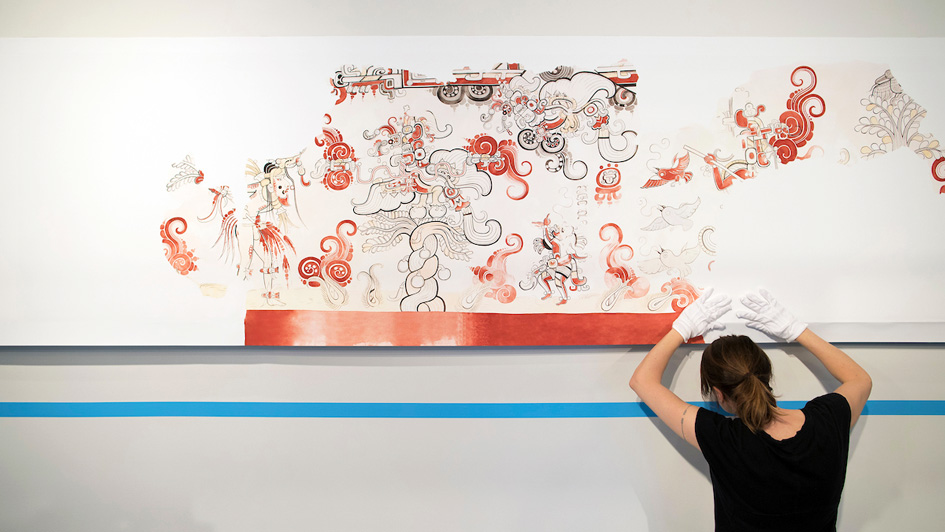 Heather Hurst ’97 copies other people’s art…and she’s not ashamed of it.

On April 21, 2018, Hurst unveiled illustrations of some of the oldest Maya murals in a life-size installation, “7000 Fragments: Maya Murals from San Bartolo Guatemala,” at the Frances Young Tang Teaching Museum and Art Gallery.

But, to understand the impact of her installation, we go back to 2001 when Hurst was “painting herself out of a job” at what she thought would be the last great Maya mural discovered.

“Here’s the thing,” Hurst said on a tour of her installation at Skidmore. “I was working on the Bonampak Murals (Chiapas, Mexico) and, admittedly, slowing down because as soon as I finished, I was going to be out of a job. I’d started a career specializing in something super rare. Like, only once-in-a-century rare.”

Then she received a serendipitous call from a friend, Bill Saturno. “How would you like to illustrate another mural?” Saturno, a Mayanist scholar, asked Hurst.

“Well I’d love to,” Hurst said. “But jokes aside, we know that’s not possible.”

Saturno then relayed a life-changing story to Hurst.

He’d just returned from surveying the Guatemalan jungle. However, out of food and water, he’d stopped to rest in a looter’s trench. Before settling in, he’d used his camera to take a picture, hoping the flash would simply scare off any snakes or other dangerous inhabitants. His haphazard photo, however, captured more than he could have ever imagined.

Just barely visible from underneath thousands of years of construction, dirt and artifacts was one of the most elaborate–and oldest, as Saturno would come to find–series of paintings featuring ancient Maya mythological images known to date.

And Hurst was about to be invited to help dig it out. 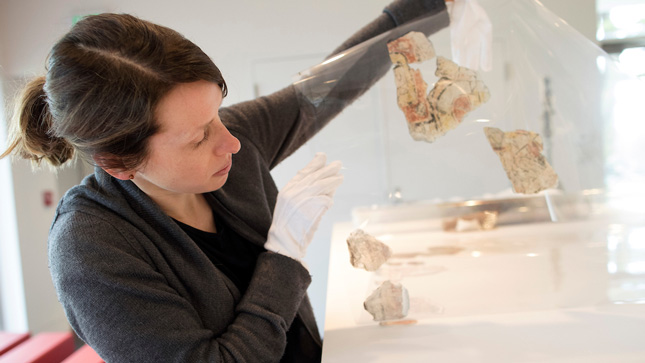 Together, Saturno, Hurst, and a small team would piece together the story told by the fragile murals and offer a rare glimpse into the belief systems of the Late Preclassic Maya. Their work would alter what was previously known about Maya theology, religious ceremonies, kings, artists and scribes.

Within the jungles of Guatemala, Hurst applied an attuned eye and empathic heart to artifacts that time and people had eroded. Sitting on a dirty bucket underground with a headlamp and a pad of paper, her patient hand and puzzle-solving passion filled in the blanks and connected the dots.

As she worked, the importance of precise renderings was palpable. With every meter uncovered, there was newfound fear that it could collapse or be vandalized.

I “drew and drew, day after day, month after month” so that we could “understand and appreciate the creative work of Maya artists from more than 2,000 years ago,” said Hurst.

Nearly two decades later, Hurst’s story and that of the Maya she studied, came to Skidmore.

“This is an amazing moment because we’ve never had the opportunity to see it all at full scale,” said Hurst. “The real mural is visible only in small tunnels. Now, we can stand back and soak it all in, interact with it, walk within it as the Maya would have.”

While Hurst’s watercolor illustrations of the murals have been on display before, they’d never been experienced like they were at the Tang Museum. Through artful reconstruction and interpretation, Hurst rebuilt the temple walls the murals were originally painted on so the entire work could be experienced as the Maya intended. 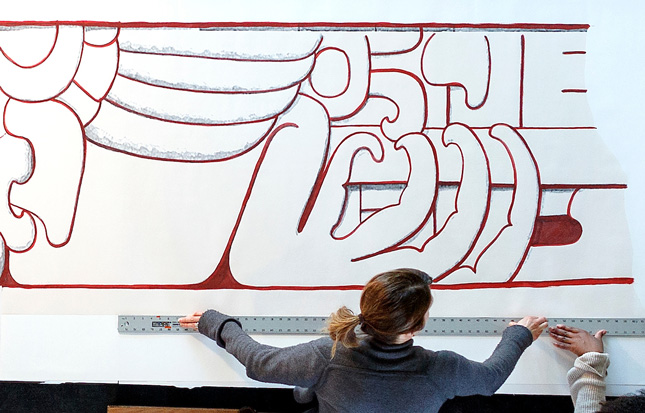 Hurst prepares an illustration that demonstrates the artistic styles of the individual painters that worked on the mural more than 2,000 years ago.

Overall, the murals depict ancestry and origin mythology for the Maya people from San Bartolo. Extremely detailed, it takes time to digest the information. But, soon you see how the Maya saw themselves and their gods, what they believed about blood, breath, and spirit. And even what they ate. As Hurst pointed out, the murals depict one of the first representations of tamales.

“Seeing this today brings back the thrill of discovery,” said Hurst. “At this scale, I’m reminded of the moment we found the beautiful calligraphic lines that were fluid and precise. The awe of seeing the intense colors of black, red, yellow and white…the precise yet stylized images of men, women and deities.”

For Hurst, what's most important is that this mural not only gives a voice to the people who used it but to the individuals who created it.

“In archaeology, it’s rare to speak about what we uncover at the level of individuals,” said Hurst. “But here, after analyzing the paintings and materials used, it’s thrilling to have actual evidence of actual people who actually painted this mural.”

These “actual people” are affectionately known by Hurst as “Banana Painter” and “Mittens Painter,” referring to the stylistic variation of how hands and feet were painted by two different people working together to create the mural.

Confirmed by chemical analysis of their paints and plaster, Hurst could visualize how these individuals moved about the room and collaborated, sometimes even finishing each other’s work.

Today, the murals are protected and preserved on site by controlling access. Introduction to biological contaminants could destroy the fragile painting. Thus, the pop-up at Skidmore is an important prototype for creating a life-sized installation in Guatemala.

In June, actual mural framents from San Bartolo, as well as a full-size copy of Hursts illustration will go on permanent display at the National Museum of Archaeology and Ethnology in Guatemala City. 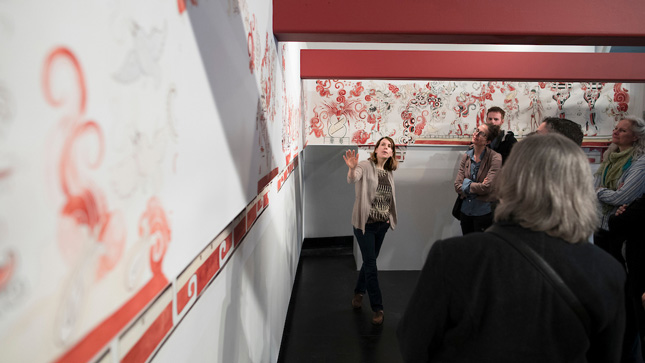 “7000 Fragments” was a pop-up exhibit at the Tang Museum for seven days of interdisciplinary study. Students, faculty and staff participated in a variety of events around the installation.

The project at Skidmore was supported by The Center for Leadership, Teaching, and Learning, The Office of the Dean of Special Programs and the Tang Teaching Museum.

Hurst's current work on the murals of San Bartolo has support from the National Endowment for the Humanities, the Guggenheim Foundation, National Geographic Society, and the Mesoamerica Center of the University of Texas at Austin. 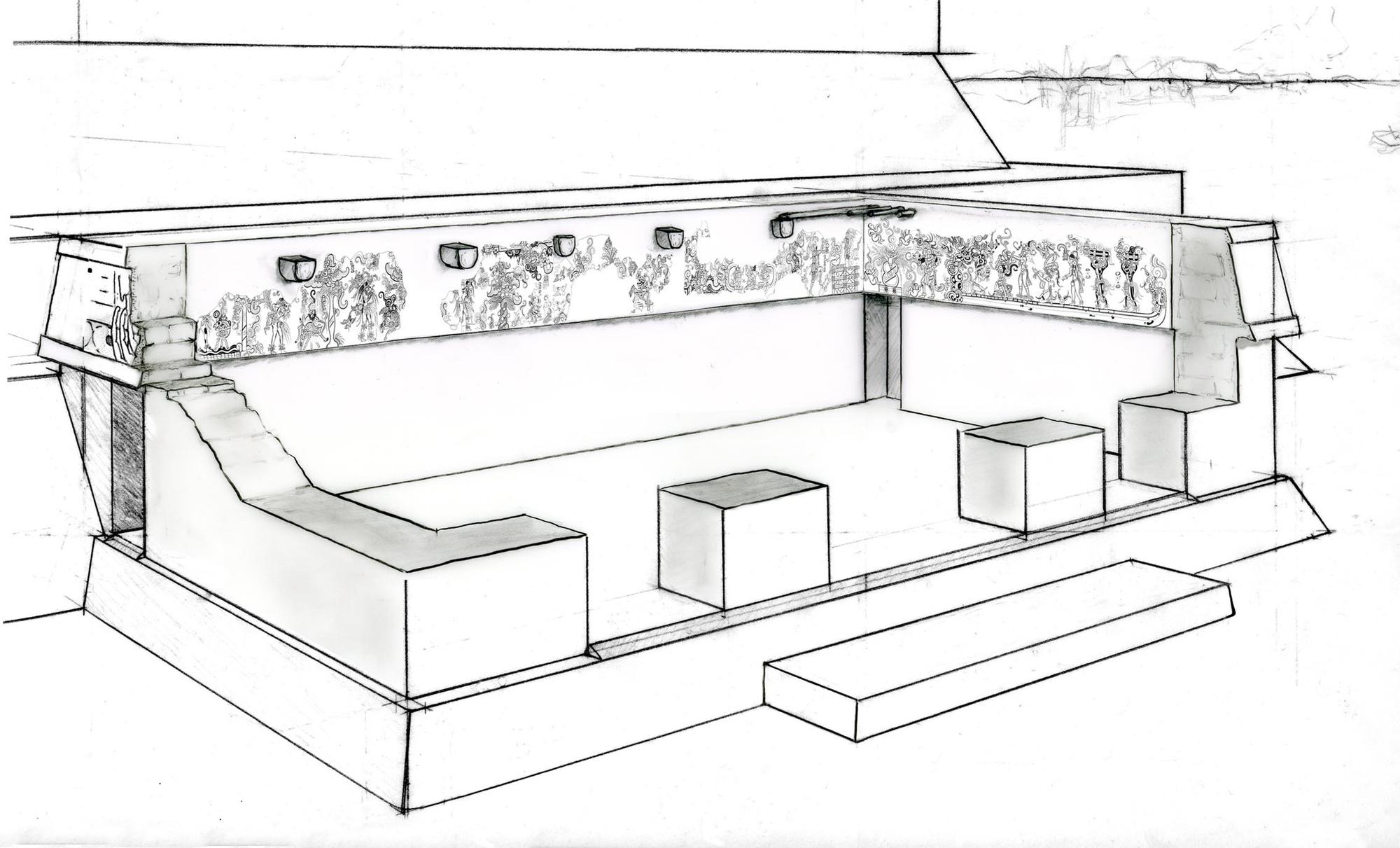 Wrapping up a remarkable academic year
The Skidmore community is marking the end of an academic year that has been filled with unique arrangements but also fantastic achievements, special moments and exceptional creativity.
END_OF_DOCUMENT_TOKEN_TO_BE_REPLACED
May 4 2021
More News