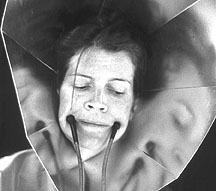 Performance Artist, LENORE MALEN, (Skidmore Class of '66) "Archivist for The New Society for Universal Harmony, A Utopian Community," will present slides and audio about Animal Magnetism, the Michelson-Morley Experiment, the Central Bureau for Astronomical Telegrams (CBAT), the Lottery as an Instrument of Education, Morgan's Revolt of the Bees and other topics on July 6th in Schick Art Gallery at 4:30pm. An Artist's Reception will immediately follow her presentation.

The New Society for Universal Harmony is an installation of black-and-white and color photographs that reinvents in contemporary terms La Société de l'harmonie universelle, a utopian society established in Paris in 1783 by followers of Franz Anton Mesmer. Mesmer's thesis, combining Newtonianism and astrology, was that a universal magnetic fluid linked all forces in nature and that an imbalance of the fluid caused illness in human beings. Mesmer initially used magnets as a curative agent but eventually dispensed with them, considering himself to be an "animal magnet." He induced an altered state of consciousness in his patients through auto-suggestion, a technique later developed into hypnosis. Mesmer's beliefs established a medical and psychological tradition that ultimately influenced Charcot and even Freud. They offer parallels with contemporary healing practices.

"Treatments" at The New Society for Universal Harmony, on display as part of the installation, have been adapted from the original cures at La Société. The New Society includes pseudo-documentary photos, video and audio narratives, testimonials, and case histories in a stage-set environment. The pseudo-documentary photographs show the putative members of the society undergoing therapy by performing acts based on Mesmer's actual treatments. The photographs rely on theatrical and narrative conventions, particularly the tableau vivant, and make reference to documentary photos from the Kinsey Institute Archives, stills from productions of Peter Weiss' Marat/Sade (both theater and film stills), the photographs of 19th century French anatomist G.B. Duchenne de Boulogne, the work of the Czech photographer Frantisek Drtikol, and the photographs of Calvin Watkins, among others, The audio tracks present pseudo-biographies, philosophical musings, and scientific explications, exploring the ways in which the institutional and communal identities of the society have been shaped.