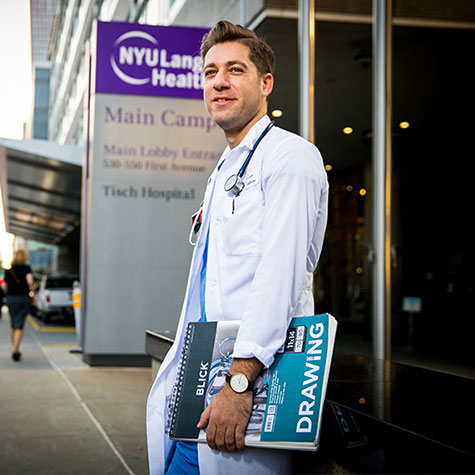 My time at Skidmore was formative, as I was encouraged to explore both of my interests: science and art. For me, one informs the other.…I think it makes for better doctors to have a humanities background.

Some weeks, Mike Natter ’08 spends up to 80 grueling hours in the New York City hospital where he’s a resident in internal medicine. It doesn’t leave a lot of time for drawing, but he finds 30 minutes, here and there, to sketch. It helps him stay balanced despite the “hellacious schedule” and sometimes emotionally draining moments inherent in caring for very sick patients.

Initially an art major at Skidmore, Natter found science and math “daunting” and preferred 3-hour studio classes “where I produced tremendously large charcoal drawings.” But, he says, “Since my childhood diagnosis of Type 1 Diabetes, I always considered a path into medicine.”

Natter had always considered himself “a passionate humanities guy from the Upper West Side, in to literature and the arts. That’s why I was at Skidmore.” Yet he didn’t see himself as particularly academic, which is why he did not initially pursue a pre-medical path at Skidmore.

When a psychology course in his sophomore year included a lecture on the brain by his future mentor Dr Flip Philips, “I got hooked on neuropsychology. I worked in Flip’s lab and saw I was not a dumb kid. I gained academic confidence and did well in my classes. Junior year, I had an epiphany: I wanted to be a doctor.”

Having been diagnosed with diabetes as a young child, he liked the idea of “helping people with the same disease” and plans to do a fellowship in endocrinology after his residency.

Because he hadn’t been studying science all along, Natter attended a post-baccalaureate program to earn the right academic credits before applying to medical school. That further study, he remarks, “gave me a chance to mature.”

He adds, “Med school admissions tests and your grades in science courses don’t tell what kind of person you are. a doctor needs to be compassionate, a ‘people person,’ empathetic.

After medical school at Jefferson Medical College in Philadelphia, Natter is now a resident at NYU Langone Medical Center. Throughout his studies and training, he says, “It’s cathartic for me, as a doctor, to continue my work as an artist.”

He shows his drawings online, and sells prints of his work donating a portion of the proceeds to help find a cure for Type 1 Diabetes. His work fits into three categories: classical anatomy illustrations, didactic pieces that teach about medical topics and cartoons that make light of serious things. He hopes to produce a few books incorporating his original art, “to explain medicine in a fun way, especially to kids.”

As he sees it, “I’ve actually been very fortunate. I got into med school by the skin of my teeth and still suffer from ‘imposter syndrome,’ feeling like everyone was smarter than me. But the truth is, I have made it where I am today because of my time at Skidmore., I was encouraged to explore both of my interests: science and art. For me, one informs the other.”