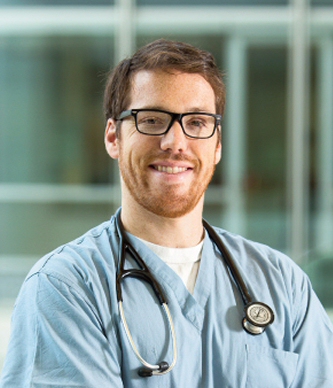 Develop relationships with mentors. They will support you in turning your aspirations into realities; and they can advise and advocate for you when need be. More than that, you'll value your relationships with them long after you graduate from Skidmore.

Will modern science some day come up with the ultimate weight loss pill?

He has good reason to think so. Working on his senior thesis, Brestoff Parker discovered a powerful anti-oxidant that reduced fat in obese, diabetic mice by as much as 40 percent. That's the equivalent of a 400-pound person losing 160 pounds. Recently awarded a patent for this remarkable anti-obesity compound, Brestoff Parker and his professor—T.H. Reynolds, associate professor of exercise science—are now seeking investors to help bring it to market.

"This could be a game-changer," says Brestoff Parker.

A double-major in chemistry and exercise science, Brestoff Parker already has racked up an impressive list of achievements. He just completed his Ph.D. in cell and molecular biology at the University of Pennsylvania School of Medicine, and is now focusing on his M.D. He holds a master’s degree in public health, has co-written a textbook on clinical research, and has published 31 scientific articles and book chapters. Along the way, he has received a prestigious Barry M. Goldwater Scholarship and a George J. Mitchell Scholarship. And he's a member of Skidmore's Board of Trustees.

"My experience at Skidmore has given me the tools I needed to take my natural interests to the next level," he says. "It’s exhilarating to work at the leading edge of science and to push the boundaries of what we know, especially when there could be implications for understanding, treating or preventing disease."

Something about Jonathan Brestoff Parker you might not know: He is co-founder, with Skidmore professor T. H. Reynolds, and CEO of Symmetry Therapeutics, a start-up dedicated to developing new pharmacologic strategies to help people lose weight. They have two patents, a third coming and more exciting work ahead of them!