Why Skidmore? Ask a geosciences and theater double major

Anthony Nikitopoulos is a double major in geosciences and theater. For many, the disciplines may seem disparate. But for Nikitopoulos, the connection was simple — he’s passionate about both.

In looking for a college, though, he didn’t think it would be possible to manage life on the stage and in the lab. That is, until he found Skidmore.

My name is Anthony Nikitopoulos and I’m a double major in geosciences and theater.

When I was in high school, I studied science-type stuff, but I always had an inkling of liking performing arts stuff. So, I did all the plays and musicals, sang in my high school choir and everything like that.

When I was looking into colleges, I thought that I would be doing something in the performing arts and something in the sciences.
My favorite thing about Skidmore? I sum it up with this thing I call a “do both” mentality.

For a while I was super scared of the prospect of saying I wanted to do acting as anything more than a hobby. But, now I’m not afraid to say that.

I don’t necessarily see myself as doing one thing my whole life. Now, I could foresee some future where I can be an actor, but maybe be commissioned to do some GIS (geographic information system) stuff in my free time. 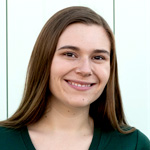 Eva is a management and business major with a minor in English from Washington, Connecticut. At Skidmore, she's preparing for her dream job: business consulting on sustainability, fair labor and ethical practices. When she's not studying, you can probably find her wandering through the North Woods or buried in a book at a local coffee shop.

Skidmore honors graduates during live Commencement
Skidmore conferred 647 degrees in a live, virtual Commencement ceremony on Saturday, May 30.
END_OF_DOCUMENT_TOKEN_TO_BE_REPLACED
May 30 2020

Congratulations to the Class of 2020
Economics, history and psychology professors, deans, advisers, administrative assistants and even Doodles the dog send their best wishes to graduates.
END_OF_DOCUMENT_TOKEN_TO_BE_REPLACED
May 30 2020
More News