“CRAZY LIKE US is a blistering and truly original work of reporting and analysis, uncovering America’s role in homogenizing how the world defines wellness and healing.”

The Globalization of the American Psyche
By Ethan Watters

“This fascinating book deserves attention… across the globe.” —Library Journal

Over the past 30 years, Americans have been industriously exporting our ideas about how to treat mental illness and how to achieve mental health. In CRAZY LIKE US: The Globalization of the American Psyche (Free Press; January 12, 2010; $26.00), acclaimed journalist Ethan Watters reveals that in teaching the rest of the world to think like us, we have been, for better and worse, homogenizing the way the world goes mad.

Traveling from Hong Kong to Sri Lanka to Zanzibar to Japan, Watters witnesses firsthand that as we sell our drugs and popularize our mental health treatments, attempting to modernize other culture’s understanding of a mental illness, we often end up steamrolling indigenous expressions of madness and replacing them with our own. American versions of depression, post traumatic stress disorder and our eating disorders are spreading around the world like contagions and the virus is us.

Should America be the self-appointed therapist to the world? Given the state of mental health in our culture – where studies find that one in four Americans have a diagnosable mental illness every year – it is time to consider whether our modern approaches have brought us a heightened level of mental health. Looking at other cultures that have not yet medicalized so much of the human condition, Watters finds that we may have more to learn than we have to teach.

In Zanzibar, Watters explores why schizophrenics in traditional cultures have a better prognosis than those in America. He discovers that our Western biomedical conception of mental illness actually increases the social stigma placed on the mentally ill. He compares spirit possession notions as they are being replaced with biomedical explanations for madness and concludes that religious explanations bind the sufferer more closely to the family and kinship group. Our attempts to decrease stigma by promoting a “brain disease” model for mental illness have done the opposite both at home and abroad.

Watters travels to Hong Kong to find that Anorexia has risen over the last two decades not only because of western fashion and diet crazes, but because we exported the idea of the illness itself. He retraces the last steps of a young woman whose death introduced the province to this deadly eating disorder. The news reports surrounding this single death – which relied almost exclusively on American experts – made an entire generation of young Chinese women more vulnerable to the disease. Watters suggests that this uncomfortable truth – that experts can unintentionally spread the very illnesses they hope to treat – may explain the rise of eating disorders in America as well.

In Sri Lanka, he sees how Western crisis counselors bungled the treatment of Tsunami victims, actually causing the community more distress by promoting “truth telling” and the public recounting of trauma as curative. The counselors had no conception that the fragile peace between warring factions in the country often relied on populations maintaining a stoic silence about past trauma. Confident of the universality of PTSD, we seldom consider the tables turned. What would we have though it Mozambican priests arrived in New York to counsel victims of 9/11?

And in Japan, Watters tells the inside story of how GlaxoSmithKline intentionally tried to change the Japanese understanding and experience of depression. Beginning in 2001, GSK may have pulled off the most remarkable feat in marketing history: To sell the drug, they first marketed the disease.

The untold story of globalization, CRAZY LIKE US urges us to consider the loss of diversity in the world’s concept of mental illness in the same way we worry about the loss of biological diversity. We are driving into extinction approaches to mental health and illness that could be helping us. We erase this cultural diversity at our own peril. 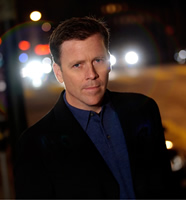 Ethan Watters is the author of Urban Tribes, an examination of the mores of the “never-marrieds,” and the coauthor of Making Monsters, a groundbreaking indictment of the recovered memory movement. A frequent contributor to The New York Times Magazine, Discover, Men’s Journal, Wired, and This American Life, he lives in San Francisco with his wife and children.

CRAZY LIKE US: The Globalization of the American Psyche. By Ethan Watters * Free Press *