Born in New York City in 1935, Porter received a bachelor’s degree from Swarthmore College in 1958 and a doctorate in classics from Princeton University in 1962. He then traveled to Carleton College where, for the next quarter of a century, he enjoyed a remarkably productive career as a teacher, scholar, and administrator.

He assumed the Skidmore presidency in June 1987. During his twelve-year tenure as president, he greatly enhanced the intellectual life of the campus, helped conceive and plan the Frances Young Tang Teaching Museum and Art Gallery, successfully led the Journey Campaign, which raised nearly $86.5 million (then the largest campaign total in the College’s history), and worked to diversify the College’s student body, faculty, and staff.

Porter’s intellectual interests and achievements were broad and eclectic. He was a regular contributor of opinion pieces to The New York Times and The Boston Globe. He wrote letters to the editor of The New Yorker. And in addition to penning books on Horace and Greek tragedy as part of his core scholarly activity, he also produced monographs on Willa Cather, Virginia Woolf, the Hogarth Press, and the Austrian pianist and composer Edward Steuermann. He and wife Helen co-authored a book on Lucy Skidmore Scribner.

Music was another great passion for Porter. He studied piano with Steuermann and harpsichord with the celebrated Gustav Leonhardt, and he regularly performed both on and off campus. His presentation "The Well-Tampered Clavier: Play, Musical and Otherwise," was a staple for incoming students both during his presidency and long after. He presented this performance at a national conference of the Association of American Colleges and Universities and last performed it for first-year Skidmore students this past September in the Arthur Zankel Music Center.

Following his term as president, Porter returned to the classroom, teaching at Williams College, Indiana University, and Skidmore, where he served as the first Tisch Family Distinguished Professor. He retired from the classroom in 2013, after more than half a century of teaching, but remained an active scholar. His edition of Lucy Gayheart for the Willa Cather Scholarly Edition was published this past August.

Porter's contributions to the Skidmore community were underscored just this past week when he was an honored guest at the annual David H. Porter Classical World Lecture, featuring acclaimed author Barry Strauss. As was his wont, Porter spent much of the dinner following that lecture speaking with students, forming a connection with a new generation of scholars and displaying, as always, his undiminished talent for and love of puns and wordplay.

Online forms are available to send condolences or contributions.

A campus and family memorial was held April 8: details here.

Hecuba and Xerxes, FDR and Brando

Skidmore visitors have challenged a huge spectrum of ideas lately, fueling discussions well after classes end each evening. For example:

Volcanic disruption
What makes a manly man?
Hecuba and ISIS?
Jews, Nazis, and sins of omission
TV and culture
Music in Mali

Volcanic disruption. Mountain volcanoes spew lava that can harden into new land, as well as greenhouse gases and particulates that can promote climate change. Under the sea, it’s the same—only more so. The vast seafloor volcanic system wraps the planet, emitting massive amounts of chemicals like carbon dioxide. For this year’s Strock Lecture in geosciences, Columbia University's Maya Tolstoy discussed deep-sea volcanoes and climate change.

Scientists can penetrate deep, dark waters and listen for the sounds of tectonic plates breaking apart in rhythmic stops and starts, on time scales from days to millennia. Among their surprising findings, Tolstoy says, are signs that very long-term orbital and sea-level changes may be drivers of undersea volcanic activity, illustrating the planet's complex and delicate balance among land, oceans, sea, and sky. [TEDx Talk]

Along with academic articles, Tolstoy co-authored a Science piece on the 2010 Gulf of Mexico oil leak, and she participated in the IMAX documentary Aliens of the Deep. [MORE]

What makes a manly man? From Barbie to Hillary Clinton, ideas of femininity have been widely debated across America. Not so for masculinity—even when so many crime headlines center on boys and men. Media scholar Sut Jhally wants to correct that. The director of the documentary Tough Guise: Media, Violence & Masculinity, he spoke at Skidmore this month.

Jhally is a professor at the University of Massachusetts at Amherst and the founding director of the Media Education Foundation, which addresses the cultural influence of advertising and other media and promotes critical thinking about today’s "hyper-mediated world.”

His Tough Guise uses footage from Marlon Brando and James Caan to Dylan Klebold and Tupac Shakur to explore how dominance and violence help define manhood—and how males can live outside those definitions to become better men. [MORE]

Jews, Nazis, and sins of omission. Hitler's pursuit of genocide was hardly a well-kept secret, yet early in the Nazi regime many nations did little or nothing to stop it or to help its victims. In Skidmore's 2016 Balmuth Lecture, historian Richard Breitman explored how US President Franklin Roosevelt and his administration responded, or failed to, when reports of the Holocaust began arriving.

Skidmore historian Tillman Nechtman describes Breitman's work as "a bold intervention in a fraught historical field." To difficult questions like "What did the American's know about the situation in Hitler's Europe and when? What was done? Was it enough?" he says Breitman contributes "nuance and clarity, sound judgment, and unimpeachable archival research."

A distinguished professor emeritus at American University, Breitman is author or co-author of 10 books on German history, US history, and the Holocaust, and he was director of historical research for the Nazi War Criminal Records and Imperial Japanese Records Interagency Working Group. [MORE]

Hecuba and ISIS? The brutality of Homeric Greece may "fit our modern world like a blood-soaked glove," says dramatist Ian Belton '94, who guest-directed the US premiere of a powerful reworking of Euripides' tragedy Hecuba.

The work—about the Trojan queen whose defeat in war only spurs more violence— is from renowned Irish playwright Marina Carr. Her Hecuba highlights parallels to today's geopolitical and cultural clashes.

Award-winning director Ian Belton observes, "Rather than lament the carnage that envelops them, the characters of Marina Carr's Hecuba are wracked with the perverse desire to defile, to cherish, to possess, to consume, to devour. Is this insanity? Or does it mirror ISIS, GitMo and the mass refugee deaths that roll in daily with the tides of the Mediterranean?" [MORE]

TV and culture. Known for incisive observations mixed with fun and humor, New Yorker television critic Emily Nussbaum has written about shows like Mad Men ("existentially brilliant"), Transparent ("a humane and confident masterpiece"), Scandal ("a much better show than House of Cards"), and Fargo ("split-screens, Reaganism, and great characters"). Her "To Stir, With Love" noted how the stand-and-stir genre of cooking show fosters "the dream of an idyllic home kitchen," while the competitive genre tends to "glamorize workaholism."

Why did the Speakers Bureau invite Nussbaum for a lecture? Chair Liz Reisen '16 says, "Journalism and media are integrated and intertwined in society" but English and media are more separate in Skidmore's curriculum. With the launch of Skidmore's new minor in media and film studies, she explains, "we wanted to facilitate a space for the two worlds to come together and explore potential collaborations." [MORE]

Music in Mali. One of the most important forms of communication in Mali, music was forcibly silenced in 2012 when Islamic extremists instituted harsh sharia law. But Mali's musicians refused to give up. To tell the tale, by BBC producer Johanna Schwartz ’96 screened and discussed her documentary, They Will Have to Kill Us First.

After the takeover in Mali, Schwartz says, "I couldn't imagine a world without music, especially in a place where music was so vital to everyday life. I began to plan my trip to Mali." There she met with a popular singer known as the "nightingale of the north," who had fled the extremists and was hiding out in the nation's south. Schwartz found the singer and other musicians to be "a living contradiction. Strong yet afraid. Solid yet vulnerable. I knew then that this story could reach the world" in a personal, moving way. [MORE]

Eleanor Samworth, Bud Foulke, Sue Bender, Ralph Ciancio, and other retirees have been interviewed by the Skidmore-Saratoga Memory Project; part of the Moore Documentary Studies Collaborative. [MORE] To hear their stories, click here. 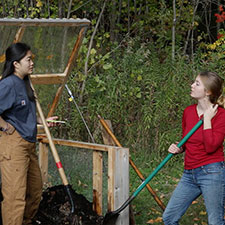 A “Politics of Food” course led Ella Sampou ’17 to the student-run composting initiative—from collection of food scraps to bicycle-wagon delivery of compost. [VIDEO] 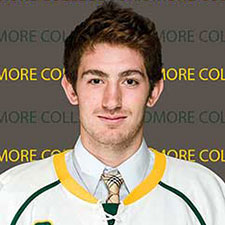 Will Golden ’19, a freshman hockey player, died after a fall during spring break last month. The campus rallied to celebrate his life and provide support. 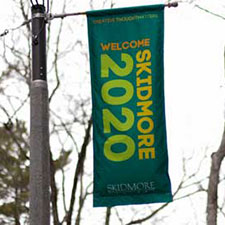 From a record-breaking applicant pool, Skidmore offered admission to a select few, and it sweetened the deal with a video and photo-sharing that are drawing a lot of smiles. 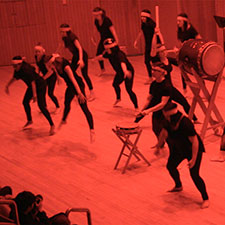 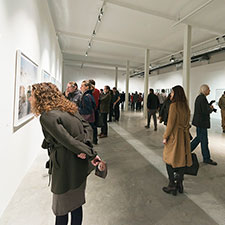 This Place, a photography exhibit on Israel and the West Bank, now at the Brooklyn Museum, is coming to Skidmore, Colgate, Hamilton, and Albany in 2018. A shared grant will also fund related events and education. 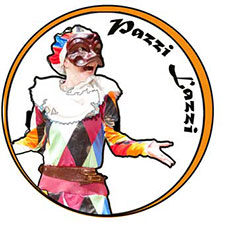 Idea-brokers of every stripe have visited campus lately, from a hip-hopping Green VP candidate and a Black Lives Matter founder to a virtual-reality sage and a medieval Italian burlesque troupe. 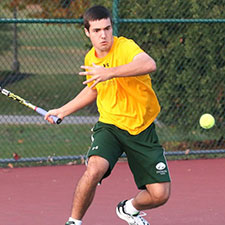 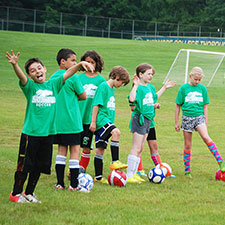 Skidmore's sports clinics and day camps for children are now open for registration. 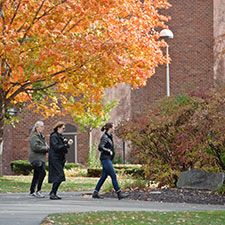 Skidmore is already planning for Celebration Weekend’s open houses, tours, and showcases. Even before invitations are sent to students’ families, details on the Oct. 14-16 event are being updated online. 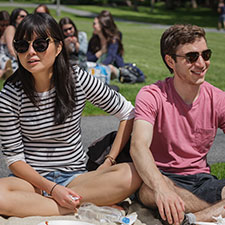 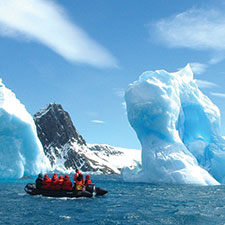 Skidmore’s 2017 expedition to Antarctica is open for registration. The Feb 9-22 trip includes two nights in Buenos Aires and nine nights on an exclusively chartered ship, with its team of expert naturalists. Information on all trips here. 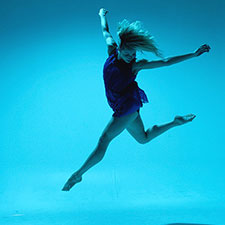 Upcoming regional events include Washington, D.C. on April 21, Boston on April 21, San Diego on April 27, San Francisco on May 5, Philadelphia on May 12, Pittsburgh on May 14 and New York City on May 19.

As a service to classmates, here is a listing of recently deceased alumni for whom obituaries are currently available online.