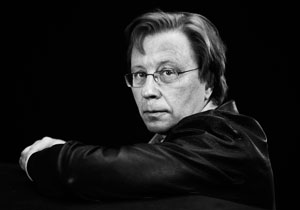 George Friedrich Haas was born in 1953 in Graz, a city in the east of Austria. His childhood was spent in the mountainous province of Vorarlberg on the Swiss border. The landscape and the atmosphere of the place have left a lasting impression on his personality.

The atmosphere was marked not so much by natural beauty in the accepted sense of the word. Rather, Haas experienced the mountains as a menace; he felt closed in by the narrow valley where the sun rarely penetrated. Nature for him represented a dark force.

The composer adds, “Just as important for me was the experience of being an outsider: Unlike my younger siblings, I never learned to speak the local Alemannic dialect. Also, I was a Protestant in a predominantly Catholic society.”

To study music, Haas returned to his native city, where his professors were Gösta Neuwirth and Ivan Eröd. Later, he continued his studies in Vienna with Friedrich Cerha.

Haas: “For all our apparent differences (and probably mutual personal disappointments) I learned from Eröd—apart from many things about the craft of composition—one principle above all else: that the measure of everything is Man, that is, the possibilities inherent in human perception.”

Haas holds Friedrich Cerha in high esteem, something that the older composer (born in 1926) returns in full measure. When the occasion arises, they demonstrate their mutual appreciation unstintingly. In 2007, it was Cerha, the doyen of Austrian composers, who proposed his former pupil for the Great Austrian State Prize which Haas duly received that year.

Until then, however, Haas had had a thorny path to traverse. He speaks openly of the years of “total failure” in trying to make his mark as a composer—another experience to leave its imprint on his development, aggravating his pessimistic leanings. Success, when it did gradually emerge, only mitigated his pessimism but could never wholly eliminate it.

It is no wonder, then, that night, darkness, the loss of illusions should have played such an important role in Haas’ oeuvre (such as in his Hölderlin-opera Nacht, 1995/1998). It was not until quite recently that his music has been illuminated by light. Light effects, as integral components of a range of his compositions, have featured prominently for quite some time now, designed by artists specially for the music. (in vain, 2000, and particularly Hyperion, a Concerto for Light and Orchestra, 2000). However, light as opposed to darkness first emerged as late as 2006 in Sayaka for percussion and accordion as well as in the piano trio Ins Licht (2007) written for Bálint András Varga.

Georg Friedrich Haas is known and respected internationally as a highly sensitive and imaginative researcher into the inner world of sound. Most of his works (with the notable exception of the Violin Concerto, 1998) make use of microtonality, which the composer has subjected to thorough examination in the wake of Ivan Wyschnegradsky and Alois Hába. He has taught courses and lectured on the subject in several countries; in 1999 he was invited by the Salzburg Festival to give a talk under the title “Beyond the Twelve Semitones”, with the subtitle “Attempt at a Synopsis of Microtonal Composition Techniques”. In the last paragraph, he writes:

“Micro counts as ‘tonality’ only in contrast with ‘normal tonality’ in its role as a system of reference. Where this system of reference has become obsolete, the notion of ‘microtonality’ has been replaced by the free decision of the individual composer in his use of pitch as his material.”

Haas: “I am not really comfortable with being pigeonholed as a ‘microtonal composer.’ Primarily, I am a composer, free to use the means needed for my music. There is no ideology regarding ‘pure’ intonation, either as Pythagorean number mysticism or as a notion of ‘Nature’ determined by trivial physics. I am a composer, not a microtonalist.” In each new work, Haas enters uncharted territory, but his music is firmly rooted in tradition. His profound admiration for Schubert has found moving expression in hisTorso of 1999/2001, an orchestration of the incomplete piano sonata in C major, D 840, an image of the tragic figure of Franz Schubert. Haas paid respect to Mozart not only in his "… sodaß ich’s hernach mit einem Blick gleichsam wie ein schönes Bild…im Geist übersehe," composed for string orchestra in 1990/1991, but also in 7 Klangräume, 2005, meant to be interspersed with movements of Mozart’s Requiem fragment (that is, divested of the supplements provided by his pupils). In Blumenstück, 2000, for chorus, bass tuba and string quintet, one hears echoes of Beethoven (perhaps never intended by the composer). In the Concerto for Violoncello and Orchestra, 2003/2004, the solo instrument quotes a motif from Franz Schreker’s opera Der ferne Klang ("O Vater, dein trauriges Erbe"). Commissioned by the Gewandhausorchester Leipzig, Haas’sTraum in des Sommers Nacht (2009) is a tribute to Mendelssohn, drawing on motifs from works of that composer, masterfully woven into Haas’ own music.

The Cello Concerto, just as Wer, wenn ich schriee, hörte mich ..., 1999, for percussion and ensemble, reflects Haas’s political commitment and his bitter realisation of his helplessness as a composer: There is no way his music could serve to better the world. The percussion concerto was written at the time of the Balkan war; when Haas heard aeroplanes flying overhead carrying their deadly burden, he asked himself whether anyone could hear him, if he were to cry out in protest against the war. The Cello Concerto begins with a scream in unbearable pain, followed by a section where the drumbeat conjures up the march rhythm of the Prussian army, a plea against Fascism.

A daringly innovative composer of rich imaginative power, a homo politicus aware of his responsibilities as a citizen, Georg Friedrich Haas is one of the leading artists in Europe today. Among the prizes he has won are the SWR Symphony Orchestra Composition Prize in 2010, the Music Award of the City of Vienna in 2012 and the Music Award Salzburg in 2013.