High Horses: An inside look at a top riding program

Did you know that since 1990 Skidmore's equestrian team is the nation's most successful - the New York Yankees of college riding, if you will? This May, at Kentucky Horse Park in Lexington, the Thoroughbreds nearly won their second consecutive Intercollegiate Horse Show Association national championship. In the end, Cindy Ford's squad earned reserve-champion status along with St. Lawrence University. Second place in North America. Better than University of Kentucky, University of Wisconsin, and Stanford, among others, and competing against top riders from a pool of talent that inclludes 8,300 riders from 370 colleges in the U.S. and Canada.

Not quite as big as last year's championship - Skidmore's sixth national IHSA win in the past two decades - but still not horsin' around. Two other times, in 1994 and 2008, the team was reserve champion. Along the way, it won 15 of the past 18 regional titles (in Zone II), and Skidmore riders have twice won the prestigious Cacchione Cup, tagging them pretty much the best hunt-seat riders in the country.

At the 2011 nationals, Flavia D'Urso '13 earned fourth place in the Open over Fences class, Kelly Campbell '12 took 10th in Open on the Flat, and Olivia Cameron '13 was 13th in the Cacchione Cup round. Julia Mazzarella '14 was second at Intermediate over Fences, and Alexandra McGuire '11 and Hanae Kimura '11 took firsts in Team Novice on the Flat and Individual Novice on the Flat. Torie Neff '11 won second place in walk-trot-canter.

Still the riders tend to fly under the radar at Skidmore, even though women's tennis is the only other T'bred program to have won a national championship, which it did in 1998.

Coach Cindy Ford, director of riding, is in her 23rd year at Skidmore and this April received the IHSA's Lifetime Achievement Award. She's not bothered by the lack of attention from those outside the riding world. "Most people think of riding as a hobby, not a sport," she says from her seat in the spartan Van Lennep Riding Center lounge. "They don't think of riders as athletes. But it is a sport, and they are athletes."

She continues, " Riding doesn't come easily. You have to work on a daily basis, often at team practices plus classes. It's tough, physical work. It uses a whole different set of muscles from anything else you do. These days, my riders do Pilates, yoga, weight training, even dancing. In fact, some of the program's strongest riders come from dancing. They've got great upper-body presence and body control."

Ford also points out that riding is a varsity sport at Skidmore - not necessarily the case at other schools- and that the athletics program takes the sport very seriously. This past year, members of last year's national-champion team all received rings from the athletics program, and the 1991 national-winning team was inducted into Skidmore's Athletics Hall of Fame. 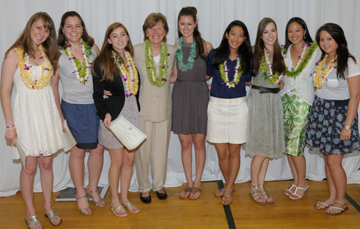 For many T'bred riders, college is the first time they've competed as members of a team and not as individuals. Says Alexandra McGuire '11, "Unlike junior horse shows, where the focus is the individual, we're constantly aware of whose event is next and which ones follow. We support one another and create the most successful team we can. It's an unbelievable feeling. My teammates are not just my teammates; they're my best friends. We ride together, we live together, we study together; we're truly connected."

McGuireis from Amherst, N.H., and earned a degree with a double majorin computer science and mathematics. A four-year team member,McGuire served as co-captain her junior and senior years. In 2010, she waschampion in the Walk Trot Canter Division at both the Regional andZone finals. She finished the 2010 season as the IHSA NationalChampion. In her final season, McGuire successfully competed in the NoviceOver Fences Division and was champion at both the Region 3 and ZoneII Finals. She was the Team Novice on the Flat competitor at the 2011IHSA Nationals in Lexington, Ky. She won again and helped to securethe Reserve Championship.

She has had the honor of being a faculty-elected member of the American Society for Women in Mathematics(2009-2010) and has received the Mathematical Association of AmericaStudent Award (2010 - 2011). McGuire hopes to work as ajunior analyst at a programming or software design company.

Tori Neff '11, a biology major, says she felt that support at nationals: "Even though I was pretty relaxed, it was still great to have so many enthusiastic team members wishing me luck before my class and to know that everyone was watching and cheering, either ringside or in the stands."

Neff, a three-year member of the team, has possibly spent moretime in the saddle in those three years than any other rider on the team.Herdedication earned her a spot on this year's national team in theWalk Trot Canter Division. She placed second out of 16 riders andearned the team five points toward the Reserve Championship. In Aprilat St. Lawrence University, she was the 2011 Zone II Team champion inWalk Trot Canter. A resident of Silver Spring, Md., she has beeninducted into the Thoroughbred Society for five semesters. She hopes to work as an ecology field research assistant.

While the team spirit is a constant, the horses definitely are not. Says Olivia Cameron '13, who is in Skidmore's 3-2 engineering program with Dartmouth, "College riding is hard because you don't know what horse you're going to ride until right before you go. The majority of the time, you've never ridden that horse before. This 'luck of the draw' format is supposed to make the class more equal and fair, but of course not all the horses are of the same quality."

"At nationals,I had a tough horse in the 'team novice flat' class," recalls McGuire, a double major in math and computer science who plans to pursue a Ph.D. in computer science. "He carried himself well, but he was slow, which added to my stress level. A couple times, the horse almost broke stride, and it took all I had to keep him moving well."

Fortunately, Skidmore riders report being extremely well prepared by their coaches, which breeds confidence. McGuire says, "This is one of the greatest things I've learned from riding at Skidmore?be confident. In the show ring, judges see confidence. I never had confidence in myself before Skidmore, but this team and our amazing coaches have taught me that I can do it if I believe I can. For me, it paid off. I won my class, adding seven points to the Skidmore team score."

So how does the Skidmore equestrian program sustain such a high level of excellence? "We attract very good riders because we meet their academic and riding needs," says Ford. "Even if they come from a professional barn with a well-known trainer, they can still continue to learn and improve. And word spreads." The staff, most of whom compete in AA horse shows, is up-to-date on the latest trends at colleges and in professional circles and are consistent in what they teach. The stable offers some 30 top-notch horses (many donated by renowned professionals, alumni, or other Skidmore friends), and it's common for riders to practice with the team, take two riding classes, and also ride on their own. Before nationals, riders test-drive three or four horses a day, to get used to different gaits and temperaments.

The best part for Kelly Campbell '12, a business and economics major, is "the quality of the horses and coaching. This is so important to my development as a rider and my goal of riding professionally. You learn the best lessons from great horses and great coaches like Cindy."

Those lessons often go beyond the barn, according to McGuire: "Being on the riding team, honestly, has changed my life. Our coaches and trainers - Cindy, Belinda, and Karen?have taught me lessons that bridge the gap between being in the saddle and living in the world. I have learned about confidence, responsibility, dedication, and perseverance."

Ford isn't a wistful type, but she obviously has great affection for her riders and pride in their growth: "They walk in as freshmen and leave four years later as grownups. They leave as different people. Responsible, confident, independent. Being part of our program has something to do with it. They don't want to leave; they can't believe it's over. But they're ready."

Coach Ford on why Skidmore is great for riding

Coach Cindy Ford says she doesn't have to sell her riding program to prospective students, because the "program sells itself." Below are her 12 reasons why Skidmore's great for riding.

3.A facility that's close to school, so there's time to ride every day.

4.On the team or not, you can take riding classes for academic credit (about 100 students a semester do).

5.You can board your own horse at Skidmore.

6.The barn and arena are heated, so you can ride all year long.

8.Active professional staff, all of whom continue to ride and compete at a high level.

9.Skidmore hosts up to 10 shows a year; team members, other students, and community members are all welcome.

10.Equestrian is a varsity sport with the full backing of the college.

11.Riders tend to be focused, disciplined students, so Skidmore's strong academic program is a good fit.

An affirming moment of joy
With appeals for social justice and charges to change the world — without forgetting to pause for moments of joy — Skidmore College conferred 589 degrees to the Class of 2022 during the College’s 111th Commencement Exercises.
END_OF_DOCUMENT_TOKEN_TO_BE_REPLACED
May 23 2022

Your guide to Skidmore's academic regalia
At Commencement, Skidmore grads don colorful and symbolic regalia to celebrate their personal journeys and creative accomplishments. Here’s your guide to the story each piece tells.
END_OF_DOCUMENT_TOKEN_TO_BE_REPLACED
May 19 2022

Dear Class of 2022 ... Love, Skidmore
A tribute to the members of the Class of 2022 from some of the people – Skidmore faculty and staff – who witnessed and supported, their remarkable growth, perseverance, and success.
END_OF_DOCUMENT_TOKEN_TO_BE_REPLACED
May 18 2022
More News