Forty-five students started collaborative research assignments with Skidmore faculty this week, heading into laboratories to investigate phenomena as diverse as the effects of alcohol on fetal zebra fish, the developmental effects of lead on the sleep/activity cycle in mice, and the behavior of "smart" hydro gels in microfluidic chips. 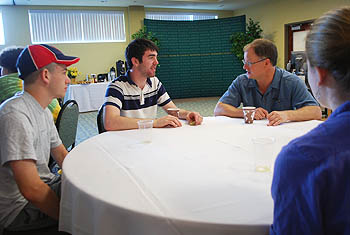 During a breakout session, Bob Turner (right), director
of the Summer Faculty/Student Research Program,
confers with Ryan Ahern '14 (left) and Jeremy
Rosen '14 (center). Ahern is working with Kim
Frederick, associate professor of chemistry, on an
inexpensive test for foodallergies using microfluidics.
Rosen is working with Bob Jones, associate professor
of economics, on a Skidmore Woodland Atlas.

And that's just the natural sciences. In the arts, humanities, and social sciences, the projects are equally diverse, ranging from a study of the politics and culture of Europeanization in the former Soviet Union, the culture and economy of American humor, and the use of videography in "new choreographic environments."

"There are three main things you're going to learn," Bob Turner promised in a straight-talking orientation Tuesday morning on the second floor of Murray-Aikins Dining Hall.

"The first thing you're going to learn is that this is about process, not results,"  said Turner, associate professor of government and director the Summer Faculty/Student Research Program for the third year running.  "You're going to have to put in a lot of very nitty-gritty time. It can be dull. It can be boring. It can often be mind-numbing. But that?s the reality of doing research."

"The second thing you're going to learn is that 'Aha! E equals MC squared!' is not the way your project is going to go. You're going to collect your data and say, 'Wait, a minute. This doesn't make any sense. That's funky.'"

"The third thing you're going to learn is whether or not a Ph.D. or graduate school is in your future. One of my good friends said that every professor and every Ph.D. student has to have at least one foot in the nerd bucket. And by that I mean you have to think that scouring small-print scholarly articles and spending lots of time poring over lab results is fun."

That is fun for Turner, he confessed.

"I am such a geek. When my kids ask me what I'm doing on my computer and I tell them I'm not in Facebook but doing stuff in Excel, they say, 'you are such a loser.' And I say, 'Yes, I am.' But I?m cranking up the Pandora and listening to Booker T & the M.G.'s, and I'm just having the time of my life."

During the five, eight and ten weeks that these students will be devoting to their projects, all will form close relationships with their faculty mentors.  The big "value add" that Turner says he aims to bring to the program is to create an interactive environment in which the students can easily discuss with each other the work that they?re doing.

It was with that end in mind that Turner organized at Tuesday's orientation a "human bingo" tournament in which the students competed to locate those within their midst who "will make maps using GIS," are
'trying to make computers run faster," and are 'developing tests for PCBS in the Hudson River or other bodies of water."

For all of these students, there will be an invitation to present in early fall at the New York Six Undergraduate Research Conference, which Turner organized last fall and which Skidmore hosted. More than 100 student researchers and their faculty mentors attended that gathering, and this year's event - to be hosted by Union College - promises to be even bigger.

"Almost all of these students are going to do capstones or honors theses on research that's related to the work they do here," Turner said. "When they return to the classroom in the fall, they really are different students. They know what it means to critically read a scholarly article and they understand that there?s a scholarly literature out there. And they ask good questions, like, 'How did they collect their data?' To have these all-stars in the classroom makes it a better experience for everyone, and that's how this program benefits the rest of the college."

The Summer Faculty/Student Research Program is made possible by the generous support of many foundations , alumni and friends. For the full list, click here.

A front-row seat to history in London
Skidmore London First-Year Experience students find themselves at the center of a remarkable moment in history following the death of Queen Elizabeth II and accession of King Charles III.
END_OF_DOCUMENT_TOKEN_TO_BE_REPLACED
Sep 16 2022

The start of a new century
Skidmore College is marking its College Centennial with a yearlong celebration of its history and reflections on the journey ahead.
END_OF_DOCUMENT_TOKEN_TO_BE_REPLACED
Sep 14 2022