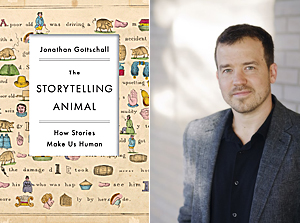 Author Jonathan Gottschall will discuss "The Storytelling Animal" on Wednesday, Nov. 14, on campus. Free and open to the public, his talk will begin at 5:30 p.m. in Gannett Auditorium, Palamountain Hall. Light refreshments will be served.

Gottschall argues that humans are the storytelling animals. We thrill to an astonishing multitude of fictions on pages, on stages, and on screens: murder stories, sex stories, war stories, conspiracy stories, true stories and false. We are, as a species, addicted to story. But the addiction runs deeper than we think. We can walk away from our books and our screens, but not from story. We dream, fantasize, and socialize in stories. Story infiltrates every aspect of how we live and think. Did you know that fiction enhances our empathy? That it is better at changing our values and beliefs than non-fiction that is designed to persuade? Did you know that stories have brought on wars, inspired atrocities, and driven massive social change? Did you know that the stories in dreams, literature, and children's make-believe, all share the same universal structure? Did you know that we all boldly fictionalize the stories of our own lives?

In a June 13, 2012, interview on PBS NewsHour, Gottschall said, "Little children come into the world and they learn to make up stories, to tell stories, to live inside stories, and then make believe by nature, but not by nurture. It's as natural and as reflexive for them as breathing."

One of the leading figures in a new effort to bridge the humanities-sciences divide, Gottschall teaches in the English Department at Washington & Jefferson College. He is the author or editor of six books who splits his publishing between psychology and literary journals. His work has been featured in major international magazines and newspapers, such as TheNew York Times Magazine, The New York Times, Scientific American Mind, New Scientist, and The Chronicle of Higher Education. It has also been the subject of reviews and reporting in journals like Nature and Science.

His latest book, The Storytelling Animal: How Stories Make Us Human (Houghton Mifflin 2012) is about the mysteries of storytelling -- about how people shape stories, and how they shape us. In its Aug. 3, 2012 review The New York Times noted, "The Storytelling Animal [is] a jaunty, insightful new book by Jonathan Gottschall, who draws from disparate corners of history and science to celebrate our compulsion to storify everything around us.

Gottschall's visit is sponsored by Skidmore's Department of Psychology and the Student Speakers Bureau, with support from the Skidmore Literary Society and Folio.

Skidmore presents StartUp Skidmore
The Feb. 17-19 workshop and competition — open to all Skidmore students from all majors — will enable participants to fine-tune their business pitches and develop a prototype for their own creative products and ideas.
END_OF_DOCUMENT_TOKEN_TO_BE_REPLACED
Jan 20 2023

Four seasons of Skidmore: 2022 in review
2022 saw the return of many beloved traditions to campus and marked the start of a yearlong celebration of the College’s Centennial, giving us all reason to pause and reflect on Skidmore’s past, present, and future.
END_OF_DOCUMENT_TOKEN_TO_BE_REPLACED
Dec 15 2022
More News