Dance and music will again combine on the Zankel Music Center stage when Skidmore's Orchestra and Dance Department present "An Evening with the Ballets Russes." 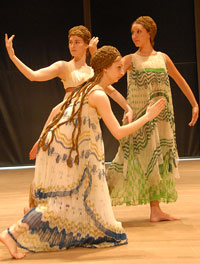 The Skidmore College Orchestra and Department of Dance will present “An Evening with the Ballets Russes” Friday through Sunday, April 5-7, in the Arthur Zankel Music Center. Performances are scheduled at 8 p.m. Friday and Saturday, April 5 and 6, and 3 p.m. Sunday, April 7. Showcasing three famous ballets from Diaghilev’s “Ballets Russes,” the program will feature Les Sylphides (Fokine/Chopin), L'Apres midi d'un Faune (Nijinsky/Debussy), and Firebird (Limoli after Fokine/Stravinsky).

Admission is free for students and children, $8 adults, and $5 seniors and Skidmore Community. For advance reservations please click here or call the Zankel box office (518) 580-5321 for more information. The Zankel Music Center is wheelchair accessible and offers listening devices for the hearing impaired. For more information, please click here.

Pre-performance conversation to focus on Diaghilev

Joseph, professor emeritus of music at Skidmore, is the author of four books on the life and music of Igor Stravinsky, including Stravinsky’s Ballets (2012, Yale Music Masterworks). Joseph won the ASCAP Deems Taylor Award for his book Stravinsky and Balanchine: A Journey of Invention.

Wentink, curator of special collections and college archives at Middlebury, was manuscript archivist at the Dance Collection of the New York Public Library for seven years. He is a writer, editor, dance and film historian who also teaches, including courses on “Diaghilev’s Ballets Russes and the Creation of Modern Culture” and “From George Washington to John Travolta: Social Dance in American Popular Culture.”

The Ballets Russes, a traveling Russian ballet company, was one of the most innovative ballet companies of the 20th century. Director Sergei Diaghilev transformed the standard of ballet to focus not only on the technique, but also on the expressiveness of movements. He departed from the classical form of a corps de ballet, placing importance on individual dancers and including more lead male dancers. The pieces that Diaghilev directed illustrated one consistent theme; his collaborations with set designers and musicians created a more cohesive and powerful performance.

The Skidmore program features elements that will be familiar to Saratoga-area ballet audiences. The first piece, Les Sylphides, choreographed by Michel Fokine with music by Frédéric Chopin, is a one-act, plotless Romantic ballet — a ballet of mood. This enchanting piece includes dancers dressed as white-clad sylphs — mythological airy sprits — dancing under the moonlight with a young male poet. Les Sylphides is noted for its romantic Chopin waltzes, including the Waltz in G-flat major, the Waltz in C-sharp minor, and the Grande Valse Brillante in E-flat major.

The second piece, L’Apres-midi d’un Faune, choreographed by Vaslav Nijinsky with music by Debussy, is one of the first modern ballets that became known for its controversial eroticism and its rejection of classical formalism. Inspired by the poem L’Apres-midi d’un Faune by Stéphane Mallarmé, the piece centers on the narrative of a young faun that flirts and chases numerous nymphs.

The third piece, Firebird, is a one-act neoclassical ballet created by Mikhail Fokine for Ballets Russes, to music commissioned from Stravinsky. The ballet is based on the lovely Russian folk tale of The Firebird, a magical creature capable of bringing both fortune and misfortune to its captor. The story is full of magic and love; it follows Prince Ivan on his journey to get past the evil magician Kostcheï and win the heart of the princess.

Skidmore ballet and modern dance students will perform the program, which will be staged by Denise Warner Limoli. Anthony G. Holland will conduct the Skidmore Orchestra. Limoli designed the production; sets are by Garett Wilson; costumes by Kim Vanyo; and lighting by Shawn DuBois.

About the production team

Denise Warner Limoli, an associate professor at Skidmore, was a featured dancer with American Ballet Theatre, dancing the full range of ABT's classical and contemporary repertoire. For 10 years she performed at Lincoln Center, Kennedy Center, and toured to major cities throughout the USA and abroad; she was a regular company teacher and assistant to the ballet masters. She specializes in the classical repertoire and teaches all levels of ballet technique, as well as ballet pedagogy.

Composer, conductor, electronic musician and performer Anthony Holland has been an associate professor of music at Skidmore College since 1982. He is director of the electronic music facilities at Skidmore and the college’s orchestral conductor. Holland’s awards and grants include several from Meet the Composer, the New England Foundation for the Arts, the Massachusetts Cultural Council, the W. M. Keck Foundation and the National Endowment for the Arts.

Shawn Dubois, technical director of the Zankel Music Center, has served as production manager, technical director, lighting and sound designer, and educator with a wide variety of performing arts organizations and academic institutions, including the Riverwalk Center in Breckenridge, Colo., the International School Bangkok, Thailand, the Gallagher-Bluedorn Performing Arts Center at the University of Northern Iowa, the Joyce Theatre in New York, the University of Massachusetts-Amherst, and numerous dance companies in the Midwest and New York City.

Kim Vanyo, costume designer, runs Khymanyo Studio in Saratoga Springs. Before focusing on apparel design, Vanyo was an avid student of classical ballet. She has combined her love of clothing and dance in a career in which she designs and creates original costumes for competitive dancers and dance companies.

A front-row seat to history in London
Skidmore London First-Year Experience students find themselves at the center of a remarkable moment in history following the death of Queen Elizabeth II and accession of King Charles III.
END_OF_DOCUMENT_TOKEN_TO_BE_REPLACED
Sep 16 2022

The start of a new century
Skidmore College is marking its College Centennial with a yearlong celebration of its history and reflections on the journey ahead.
END_OF_DOCUMENT_TOKEN_TO_BE_REPLACED
Sep 14 2022