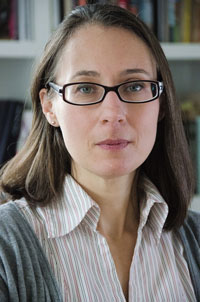 A love of history and a keen artistic sensibility have provided Rachel Seligman ’91, assistant director for curatorial affairs at the Tang Teaching Museum, with an unusual inspiration:  Solomon Northup.

The slave whose life story is the basis for the acclaimed current motion picture was the focus of an exhibition that Seligman curated nearly 15 years ago. She has since co-written a well-regarded book on Northup that has been cited by noted scholars and used by consultants on the historically accurate movie.

Seligman and Clifford Brown will be at Union College on Thursday, Nov. 14, for a panel discussion, reception, and book signing. (See box for details.)

In the weeks leading up to the debut of director Steve McQueen’s 12 Years a Slave (Fox Searchlight Pictures), Seligman and her co-authors— Brown, Robert Porter Patterson Professor of Government at Union College, and David Fiske, former senior librarian at the New York State Library—discussed Solomon Northup in national and regional media. For Seligman, it all came down to a good story.

Rachel Seligman and Clifford Brown will
participate in a panel discussion this
Thursday, Nov. 14, back where it all
began – on the Union College campus.
There will be a reception at 4:30 p.m.,
panel from 5 to 6 p.m., and book signing
at 6 pm. The event will be in the Nott
Memorial and is open without charge
to the public.

Interested in local history, she read the Northup autobiography Twelve Years a Slave: Narrative of Solomon Northup, a Citizen of New-York, Kidnapped in Washington City in 1841, and Rescued in 1853, From a Cotton Plantation Near the Red River, in Louisiana. Said Seligman, “I could not put it down; it was so compelling. The writing, detail, observations, insight—it was like no other slave narrative I’ve read.” She added, “I couldn’t believe I’d grown up in Saratoga Springs but did not learn this story in school. I wanted to share it with a million people.”

Seligman explained, “As a curator, my mode of communication is an exhibition.” Then the director and curator of the Mandeville Gallery at Schenectady’s Union College, she connected with Brown, who teamed up with his students to research Northup. The group of collaborators collected artifacts, documents, and photos to authenticate the story.

The result was an exhibition, "Twelve Years a Slave: The Kidnapping, Enslavement+Rescue of Solomon Northup," which ran from January to March 1999 at Union. It was the first historical show held at the gallery and featured a number of ancillary events, including one in which Seligman, a violinist, played a traditional music selection that Northup, also a violinist, had included in his book. Accompanying the Northup show was an exhibition of contemporary art by Terry Adkins titled "Powre Above Powres: Passing Freedom." The two shows combined to deliver a nuanced picture of the American slave experience. Seligman called this “a perfect example of interdisciplinarity, with contemporary art, American history, music, political science, and sociology, among other disciplines, all coming together.”

In an essay for the exhibition’s catalogue, she wrote, “Although it was widely publicized at the time, Northup’s tale is largely unknown today outside of a small circle of historians. It is our hope that this exhibition will rekindle interest in this regional figure whose experiences in slavery powerfully illustrate an important part of our national past.” She explained, “Using the exhibition as a way to start a conversation about our shared past was my motivation.”

Thousands of visitors saw the exhibition at Union College; many more viewed it when it traveled to Saratoga Springs and Glens Falls, areas where Northup had lived. And interest in Northup continued after the show closed. Brown began collaborating with David Fiske. The two gathered information and circled back to Seligman to discuss next steps. They decided to collaborate on a book.

At about the same time, the Northup story was gaining traction in the film world. Fiske shared a copy of their manuscript with the movie people, and this summer Praeger published their book, titled Solomon Northup: The Complete Story of the Author of Twelve Years a Slave. Amazon.com describes the book as a “comprehensive biography of Solomon Northup [that] picks up where earlier annotated editions of his narrative left off, presenting fascinating, previously unknown information about the author of the autobiographical Twelve Years A Slave.”

Henry Louis Gates, Jr., the Alphonse Fletcher University Professor at Harvard University and director of the W.E.B. Du Bois Institute for African and African American Research, was a historical advisor on the McQueen film and called the book “indispensible” to his work with the film. He said, “Fiske, Brown, and Seligman’s Solomon Northup is the best current biography available. The facts they have uncovered are invaluable—the living descendants they have identified, precious.” She called Gates’s endorsement “the highest point” thus far in her journey with Northup. The book also has been referenced by media such as NPR, The New York Times, and area newspapers and airwaves.

She believes the story of Solomon Northup is “a historical story that needed to be made into an art historical story.” It was a realistic challenge for the art history major and English minor who has always been interested in visual modes of communication. As an undergraduate, she worked at the Schick Art Gallery with David Miller, professor emeritus of art. The experience “made me want to work in museums and galleries to create narratives through art.” After Skidmore she earned an M.A. degree in art history at George Washington University and was an intern at the National Museum of American Art.

After 13 years working at Union College, Seligman returned to Skidmore in 2011 as the first associate curator at the Tang Museum. She explained, “As the Tang became known for being a leader in object-based learning I kept my eye on it and was inspired. The chance to come here and be a part of a place that felt familiar and welcoming and where everyone agreed about the value of the endeavor was a dream come true.”

Seligman added, “It’s great to be with this group of people that is always motivated by ‘how can we figure this out and support this idea.’ I’m so happy to be back.”

Photo essay: Excited to be back on campus
The entire Skidmore community is enjoying the start of a new academic year filled with dynamic courses, athletics competition, beloved traditions, and — most of all — the return of all students, staff, and faculty to campus.
END_OF_DOCUMENT_TOKEN_TO_BE_REPLACED
Sep 22 2021

Thoroughbreds triumphantly return to competition
Our fall athletes have been waiting a long time to be back on the field after the 2020 season was canceled. Without missing a beat, they've returned in full force and are racking up the wins.
END_OF_DOCUMENT_TOKEN_TO_BE_REPLACED
Sep 15 2021