Eggs, Alzheimer's, and everything in between 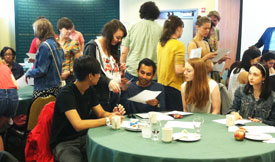 Instead of covering numbers on a card, the students at the kickoff meeting in late May had to identify their peers according to aspects of their research. Berke Tinaz ’16 was the correct answer to the clue “deconstructing the plant cell wall”; Jaya Borgatta ’16 is on the team “studying the atmospheric fate of fly ash”; Emily Kortright ’15 is the one “analyzing food blogs.” Round 2 clues included succinic acid, the interactive Web program Omeka, frog oocytes, Penium margaritaceum, and alcohol modulation of ligand-gated ion channels (see the glossary below).

Before the bingo, Turner sorted students for seating at large tables where they would ask each other questions about their research. First sort: natural sciences and everyone else. Sort 2: studying living things and everyone else. Final sort: frogs, fish, mice; children and people; math and statistics; and plants, minerals, oceans.

The student researchers, from 19 different academic disciplines and ranging from freshmen to 2014 grads, mingled easily, enjoying the opportunity to meet one another and perhaps gain an edge for the bingo contest. Not present by design were the nearly 40 professors who are collaborating with the students. Turner explains, “This day was about the students getting to know one another, gaining an appreciation for the cool things their peers are doing, and being encouraged to connect with and learn from one another.” (See the complete list of faculty-student teams and topics below.)

An eavesdropper at one table could have discovered that anthropology major John Kolios ’16 is working with archaeologist Heather Hurst ’97 on a collection of artifacts (projectile points, pottery fragments, fire-cracked rock) from a local residential subdivision. Ultimately, Kolios says, they hope to give a public presentation and create a Web site with a timeline of the finds. He adds that he’d like to stay involved with the project for the duration of his Skidmore career.

At another table, American studies major Rebecca Baruc ’15 describes her co-writing of an article with professor Beck Krefting; they’ll submit it in the fall and present in December at the Mark Twain Circle of America and the American Humor Studies Association.  She says, “We want to explore how alternative comedic voices are using social media to redefine the production, consumption, and exchange of comedy, which entails interviews with comedians and social media experts, in addition to following the current discourse on social media and comedy.”

The Summer Faculty-Student Research program offers students the chance to spend five, eight, or 10 weeks in full-time research, to gain a hands-on appreciation for scholarly work. Outcomes of the summer collaborations vary—perhaps a foundation for a senior or honors thesis, perhaps co-authorship on published results. In any case, Skidmore alumni who go on to graduate schools consistently report that research experience gives them distinct advantages as scholars.

Penium margaritaceum:  A unicellular green alga used as a model for research into the formation, breakdown, and repair of plant cell walls.

Ligand-gated ion channels: Cell-membrane proteins that respond to chemical signals to prevent or allow the entry of certain chemicals into the cell.

John Anzalone, French language and literature, with Luke Conley ’14: Visual Resources for Study of Representations of the Great War

Kara Cetto Bales, chemistry, with Lauren Soong ’16: Synthetic Strategies and their Application in the Organic Lab

Mike Eckmann, computer science, with Yang Yu ’16: Toward detection and recognition of human speakers in meetings

Kim Frederick, chemistry, with Sibin Wang ’16: Development of a Microfluidic Assay for Analysis of D-lactate in Urine

Kim Frederick, chemistry, with Julie Bryant ’16: Prototyping of a Lab on a CD Player for Portable Chemical Analysis

Robert Hallock, neuroscience, with Mitch Spring ’15: The Effect of Sneezing on Olfaction Threshold

Rebecca Howard, chemistry, with Thomas Schneider ’15: The role of the hydrophobic gate in alcohol modulation of ligand-gated ion channels

Mark Huibregtse, mathematics, with Adam Winchell ’16: An exploration of the geometry of equidistant sets

Stephen Ives, health and exercise sciences, with Cheyanne Slocum ’17: Is the deleterious effect of a high-fat diet on vascular health mediated through vascular mitochondrial dysfunction?

Ela Lepkowska-White, business, with Emily Kortright ’15: Meanings of Food: What Can We Learn from Food Blogs?

Javier Perez-Moreno, physics, with Quanhang Chen ’16: A toy model for the nonlinear optical response of molecules with modulated conjugation

Flip Phillips, psychology and neuroscience, with Emerson O'Donnell ’15: The effect of symmetry and abstraction on aesthetic judgment and gaze patterns

Kelly Sheppard, chemistry, with Miles Calzini ’16 and Stephanie Zhen ’16: Expansion of the genetic code with pyroglutamate

Nurcan Atalan-Helicke, environmental studies, with Lauren Bosche ’15 and Helen Mebrate ’16: Alternative Seed Systems and Food Resilience in the US

Erica Bastress-Dukehart, history, with Ryan Crotty ’15: The Economy of Desire: Botany and Empire in 17th-century Europe

Reba Howard, chemistry, with Alex Mola ’16: The role of the hydrophobic gate in alcohol modulation of ligand-gated ion channels

Corinne Moss-Racusin, psychology, with Elizabeth Johnson ’15: The Consequences of Backlash Against Men: Investigating the Influence of Behavioral Attributions on Male Elementary School Educators

A front-row seat to history in London
Skidmore London First-Year Experience students find themselves at the center of a remarkable moment in history following the death of Queen Elizabeth II and accession of King Charles III.
END_OF_DOCUMENT_TOKEN_TO_BE_REPLACED
Sep 16 2022

The start of a new century
Skidmore College is marking its College Centennial with a yearlong celebration of its history and reflections on the journey ahead.
END_OF_DOCUMENT_TOKEN_TO_BE_REPLACED
Sep 14 2022