One of the newest tools in the arsenal of the Skidmore Microscopy Imaging Center is being used this summer to answer fundamental questions in cellular research. 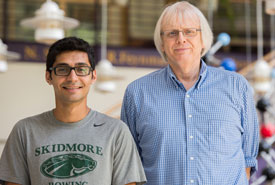 With the help of the CLSM and the tiny green alga Penium margaritaceum, which Domozych was instrumental in identifying as a model organism for plant cell wall research, the duo is studying the development of specific polymers in experimentally altered cell cultures. Their work involves removing polymers from the walls of living algal cells to observe how the cells regenerate those polymers. In addition, they have produced protoplasts—cells without walls—to learn how a new wall is produced from scratch.

The confocal laser scanning microscope is critical to this analysis because it allows researchers to study minute, living organisms three-dimensionally. In a nutshell, said Domozych, “you take a cell, put it on a slide, and get wonderful 3-D images. You can do rotational and quantitative analysis, and see incredible details.” The CLSM has six lasers, but typically five are in use at one time, allowing for sophisticated experiments such as the comprehensive investigation of cell wall dynamics in Penium. Besides generatating high-resolution, three-dimensional images of specimens, the CLSM also provides panoramic 360-degree profiles that may be rotated for analyses at any angle.

Domozych said he hopes that the CLSM “will be our key equipment for the next generation or so of young scientists.” He’s turned hope to reality by encouraging students to use the microscope as much as possible. It did not take much urging for Tinaz to embrace the CLSM—the biology major and math minor has been conducting microscopy research with Domozych for more than a year.

He built his skills by using the College’s older confocal light microscope. The CLSM was purchased at the end of his first year, and when he first saw it, Tinaz thought, “This will be hard to use.” But the learning curve was not too steep, he discovered. He so enjoyed the CLSM that when he was given a chance to finish a project quickly by using the confocal light microscope, or to wait and use the CLSM, he waited. As of this past June, Tinaz said he’d accumulated about 150 hours on the CLSM, much of them examining Penium, which he called a “beautiful” cell to study.

“We are trying to regenerate the cell wall,” Tinaz explained. “There are two main ingredients, cellulose and pectin. We know a lot about pectin so we are studying cellulose, observing how it grows and what happens in elements like the protoplasts.”

He has been aligned with Domozych and the Penium research for most of his Skidmore career, first as a work-study student and two summers (2013 and 2014) as a fellow collaborator. It is work that makes him “pretty happy,” he said. As it should. In addition to using state-of-the-art equipment, Tinaz has secured a co-author credit in a prestigious science journal. He was one of several student collaborators whom Domozych credited in the paper titled “The cortical cytoskeletal network and cell-wall dynamics in the unicellular charophycean green alga Penium margaritaceum,” which appeared March 5, 2014, in Annals of Botany, published by Oxford Journals.

In addition, Domozych will present results of the study at the Gordon Reseach Conference on Cell Walls next summer at Bentley College in Massachusetts and the Northeast Algal Symposium in Syracuse next April.

All of which suits Tinaz, who hails from Karsiyaka Izmir, Turkey, just fine. “I have a 24-hour pass to the lab and am here at all hours. If I’m not practicing with the crew team, I’m here. I really enjoy it. I would gladly spend the next 50 years doing this or similar work in a lab or at a private company. If this is not your passion, you cannot do that.”

A front-row seat to history in London
Skidmore London First-Year Experience students find themselves at the center of a remarkable moment in history following the death of Queen Elizabeth II and accession of King Charles III.
END_OF_DOCUMENT_TOKEN_TO_BE_REPLACED
Sep 16 2022

The start of a new century
Skidmore College is marking its College Centennial with a yearlong celebration of its history and reflections on the journey ahead.
END_OF_DOCUMENT_TOKEN_TO_BE_REPLACED
Sep 14 2022