Student-faculty research kept Skidmore hopping again this summer, with about 70 students working working 9 to 5 for five, eight, or ten weeks.  Projects were wide-ranging as usual, from Afghan women in leadership and the lives of Mexican migrants, to the effect of metals on bacteria and the cellular mechanisms of weight loss, to World War I images and the meanings of food blogs.  Here are a few spotlights: 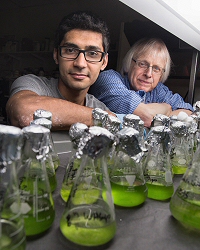 Scummy green algae may have a very bright future-as biofuels. Unlike more complex plants, algae have simple cell walls that break down more easily for burning and yielding up energy efficiently.

Algae biologist David Domozych says, "In the past few years, algal biofuels have really caught on among researchers." He and Berke Tinaz '16 are part of that movement, studying cell-wall construction and deconstruction in a unicellular alga called Penium. Domozych explains, "We use enzymes to dissolve particular components of the cell wall—say, pectin or cellulose—and then see how the organism regenerates those components." They can even remove the entire cell wall and keep the cell alive in a sugar solution. By diluting that solution gradually, Domozych says, they can stimulate the cell into building a new cell wall "and learn whether it first generates pectin or cellulose or a different polymer, and which comes next as the structure is rebuilt."

The duo was joined this summer by Maja Rydall, a PhD student from the University of Copenhagen, which is developing the use of antibodies to live-label parts of the cell wall for microscopic detection. Domozych also partners with Cornell and other Penium researchers in the US and abroad. What Skidmore brings to the partnerships, he says, is visual: "With our confocal laser-scanning microscope, we can see antibody-labeled areas and create 3D images, and our electron microscopy gives us a view inside the cell as its secretory system creates polymers to repair its cell wall."

Tinaz, a summer researcher last year too, says he's pretty adept now with the microscopy: "There are a lot of options for setting lasers and filters, to let us detect the chemical labels we've attached and to get the multilayered imaging correct." 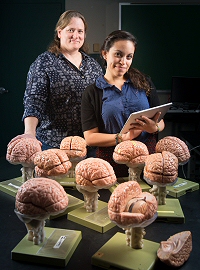 Can't get a song out of your head? Don't complain: it may be a great memory aid. Testing Alzheimer's patients and the memory-piquing potential of music is the project of Renee Schapiro '15 and Denise Evert, a neuroscience and psychology professor.

Schapiro, who once had a summer job at an Alzheimer's care unit, recalls "one unhappy, unfriendly patient. When I tried playing her some music, she squeezed my hand and her face lit up!" Nurses also noticed improved cognition and comfort in many patients after a music session.

So this summer Schapiro worked with Evert to bone up on the existing literature and plan her senior thesis research into music and memory. Using an iPod and headphones, Schapiro presents participants with familiar songs from different eras of their lives and then asks for free-recall anecdotes. Evert says, "We want to see whether the time and mood of the song correspond to the memories reported by the participants—does a happy '60s song help them retrieve a happy memory from that time in their lives?" Schapiro asks family members or caregivers to help confirm the accuracy of these autobiographical memories.

With the summer devoted to prep work, the testing is ongoing this fall. "Just finding the participant and control groups was a huge job," notes Evert. Schapiro forged relationships with hospitals to recruit Alzheimer's patients who don't have other physical or mental conditions that could muddy the results, and with assisted-living facilities and other agencies to assemble a control group of similar age and background. She also sought to limit the variety of venues—hospital rooms, senior centers, homes—to rule out distractions, such as aromas that could evoke memories as powerfully as the music might.

After extensive data analysis, the duo would love to tease apart whether it's the melody, rhyme, rhythm, or words of a song that most affect memory. 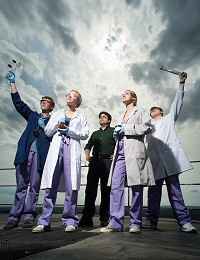 Each crystal-clear raindrop has dirt at its core. Tiny airborne mineral particles—desert sand, topsoil dust, volcano ash, man-made soot—get layered with moisture from the air until droplets form and fall as rain. For ocean-dwelling microorganisms, rain is a crucial source of iron. An influx of iron particles raining into the sea can stimulate plankton blooms, and since plankton take up carbon dioxide, they help reduce global warming. But before then, while particles remain in the atmosphere, sunlight can alter their chemistry and produce pollutants that increase global warming. "It's a very complicated story," says chemist Juan Navea. "Our lab is fine-tuning the data used by major atmosphere and climate-modeling systems."

Jaya Borgatta '16, Amanda Paskavitz '17, Daniel Lesko '17, and Matthew Lueckheide '17 worked with Navea on several aspects of aerosol particle dissolution, adsorption, and photochemistry. Using power-plant fly ash from coal mined from the US, Central Europe, and India, the researchers are testing how long it takes the particles to dissolve; such aerosols typically float in the air, carried on wind currents all around the world, for weeks and even months. They're also analyzing how the interactions between atmospheric compounds and dust particles are affected by sunlight. Exposing the particles to ultraviolet light in a solar simulator, they check and recheck the chemistry every few minutes, and "we may see that the compound attached to the particle lessens over, say, 30 minutes," Navea says. "Where do those compounds go? They get released as greenhouse gases such as nitrous oxide, which is 300 times more powerful than carbon dioxide as an agent of climate change."

The researchers use spectroscopy to identify chemicals, but there are no instructions or lab books for analyzing the varying shapes of these layered, agglomerated molecules. To confirm their results, they compare spectroscopic results with quantum chemistry simulations on a computer. 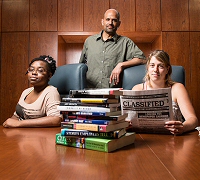 Attention, job-seekers: What color is your skin and where do you live? Both factors might affect your job-hunting success.

Sociologist Amon Emeka says, "We know the national average that black people are three times more likely to be unemployed as white people. That figure is higher in some cities and lower in others, and we don't know a lot about why." So, along with Rebecca Datus '15 and Taylor Sczymecki '15, "instead of asking what kinds of people do well or poorly in the labor market, we're asking what kinds of labor markets do well or poorly at being equitable."

Comparing the 50 largest metropolitan areas in the US, the researchers gathered unemployment rates in 2005–07 (before the 2008 economic crisis) for men in eight racial or identity groups: black, white, Latino, Native American, East Asian or Indian, Southeast Asian, Arab or Middle Eastern, and other. And some of those groups were pretty small, Sczymecki notes, so it was a struggle trying to get large enough sample sizes. Next they scoured census data and other sources—such as a big, thick tome called Cities Ranked and Rated—to characterize each city's municipal budget, school system, public transportation, labor union strength, and other factors. Datus also took an interest in population growth vs. job growth rates; Taylor was eager to expand the study to women, for whom marital status, family leave, child care, and other issues can greatly complicate their working lives. But all three agreed that the cities' civil-rights climate, such as equal-opportunity enforcement and affirmative action laws or prohibitions, would be key to their analysis.

And then came the number-crunching. Datus was dismayed that, inevitably, "some of the data we entered (for hour upon hour!) didn't need to be included in our analysis." And running separate analyses for each metropolis was a huge job, although she says it was both "the hardest and the happiest chore, because once I got the results, I was really excited with what I worked so hard to create." 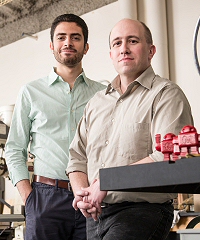 Do-it-yourselfers are leaving Home Depot in the dust. Exploiting digital design, shared or "open" software and hardware, crowd-sourced funding, and small fabrication machinery like 3-D printers, a new generation of inventors hopes to change the landscape of manufacturing. Maker Faires and  Makerspaces (one inspiration for the Idea Lab in Skidmore's planned new integrated-sciences building) are drawing collaboration-minded innovators together to show—and share—their homebuilt electronics and other creations.

Scott Mulligan, a scholar in business and international affairs, is exploring how developments like affordable 3-D printing may soon enable almost anyone "to download designs and engage in patent infringement." Some predict that the Maker movement and traditional industry will soon conflict the way Napster and the music-record business did around 2001. Mulligan and Ramzy Kahhale '15 spent the summer researching, conducting interviews, and administering surveys on the attitudes behind the open-source philosophy and the Maker movement, as well as the implications for intellectual property rights.

They asked what motivates Makers to create and share, how they perceive potential competitors that may use patents against them, and whether they'd ever want to assert intellectual property rights for their own inventions. They also pondered whether intellectual property laws, which are intended in part to protect and therefore stimulate the work of innovation, could now be used to stifle the innovation of do-it-yourselfers outside of traditional businesses. Kahhale, a self-described tinkerer himself, enjoyed seeing Makers' inventions and sees how the movement can be "appealing and perhaps revolutionary." An international studies major who's considering law school, he says the hardest part of the summer project was refining their survey wording: "It's tough to craft questions that will give you the exact kinds of answers you want."

If Makers are dedicated to the ideal of a creative-commons production model that improves on the operations of large-scale, hierarchical organizations, can they still become successful entrepreneurs? Mulligan and Kahhale are teasing out some good clues. 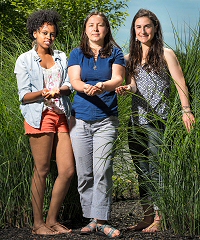 Humans have domesticated thousands of plant species but currently use only a few hundred. In the United States, just two or three big companies dominate the commercial seed market. But lately, nonprofit groups and communities are working to conserve agricultural biodiversity and regain control of seed breeding and exchange. And they're being watched by Nurcan Atalan-Helicke, a faculty member in environmental studies.

She joined Helen Alemayehu Mebrate '16 and Lauren Bosche '15 to pore over catalogs and Web sites and to interview seed purveyors, breeders, and nonprofits. They're studying who is involved in seed-exchange networks and what their concerns are, in order to understand the influence of seed exchanges in the agricultural and food system—for example, do such networks actually boost the resilience of their communities' agricultural production in the face of droughts or pests?

The first seed-saving exchange network was established in 1975, and today there are more than 340 seed libraries in the US, but their impact is still minor. Bosche felt the same way about her research, she says, until "I saw Nurcan present at a conference, and I was inspired. I returned to campus with a greater sense of how our work contributes to the larger debates." Focusing on a library in New York and a native-seed group in Arizona, Bosche enjoyed the challenge of not just fact-gathering but "trying to get a handle on what wasn't readily available or what was left unsaid."

Another crucial subject for the researchers was the connection between seed exchanges and the notion of food sovereignty. While food security is about access and sufficiency, food sovereignty is about communities' rights to determine their own seed choices, food markets, and farm policies. Like seed exchanges, the food-sovereignty movement is spreading fast. For Mebrate, that growth is comforting; she was impressed by the large conferences she and her colleagues attended, and she says that if more people learn about food systems, "hopefully we'll make better decisions."

A front-row seat to history in London
Skidmore London First-Year Experience students find themselves at the center of a remarkable moment in history following the death of Queen Elizabeth II and accession of King Charles III.
END_OF_DOCUMENT_TOKEN_TO_BE_REPLACED
Sep 16 2022

The start of a new century
Skidmore College is marking its College Centennial with a yearlong celebration of its history and reflections on the journey ahead.
END_OF_DOCUMENT_TOKEN_TO_BE_REPLACED
Sep 14 2022