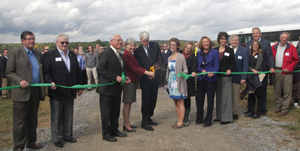 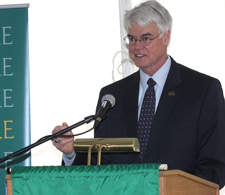 A year in development, the facility is one of the largest solar arrays in New York State. It consists of 6,950 ground-mounted solar panels spanning eight acres of land owned by Skidmore and located in the town of Greenfield about a mile from the Skidmore campus.

At an Oct. 7 ribbon-cutting ceremony attended by Congressman Tonko, state and local officials, members of the Skidmore College community, and representatives of NYSERDA, Skidmore President Philip A. Glotzbach called the array “the next step forward in Skidmore’s development of renewable energy initiatives.” He called the array an example of Skidmore “responding creatively to a major challenge.”

The project was supported by $2.3 million from New York Governor Andrew Cuomo’s NY-Sun initiative administered by NYSERDA. NY-Sun is a $1 billion initiative to advance the scale-up of solar and move the state closer to a sustainable, self-sufficient solar industry. To develop the project, Skidmore contracted with Dynamic Energy of Wayne, Pa., a renewable-energy consulting firm. Washington Gas Energy Systems operates the array.

“This installation responds to the pressing need for environmentally responsible, cost-effective energy for our campus operations, and it exemplifies our strategic commitment to sustainability,” Glotzbach said. “We are grateful for the support provided by Gov. Cuomo’s NY-Sun Initiative, without which this project would not have been possible.”

Said Congressman Tonko, “Skidmore has to be so proud. For decades, the Capital Region has embraced new technologies, and it is that commitment to forward thinking that has positioned our communities well on a national and global scale. Today, Skidmore continues its proud tradition of innovative leadership by completing this project, greening our environment, and cutting energy costs. I thank President Glotzbach and his team on campus for their dedication to ‘walking the walk’ on clean energy.” 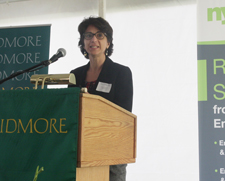 Tonko added, “It is inspirational to students to see this in action,” and thanked Glotzbach and Skidmore “for your vision.”

Janet Joseph, vice president for technology and strategic planning at NYSERDA, said, “Young people today are coming of age in an era of environmental challenges. What better place than a college to teach these future leaders that there is an energy future that is environmentally sustainable and economically sound?” She credited the NY-Sun Initiative of Gov. Andrew Cuomo with “moving industry toward a more sustainable and self-sufficient future.”

Announced by Gov. Cuomo in his 2012 State of the State Address, NY-Sun deploys public funds in a strategic manner to drive industry to scale and reduce burdens on ratepayers. Since the program’s inception, New York State has had unprecedented growth in solar installations, with a total of 316 megawatts of solar photovoltaic installed or under contract – more than was installed in the entire prior decade. 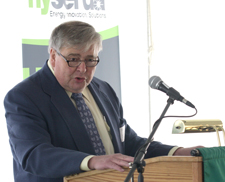 Michael F. Hall, special assistant to the vice president for finance and administration at the College, called the solar project “the crown jewel in Skidmore’s sustainability program,” adding, “sustainability is a hallmark of Skidmore.” Hall, who worked tirelessly on the solar array over the course of a year, thanked a number of people, including members of the Greenfield town and planning boards, as well as its environmental committee, for oversight on the project during the planning stages. Saying he was “proud to play a small part in this project,” Hall added, “I know it will be a part of Skidmore’s legacy."

Margaret Pfeffer ‘15 said that the project “represents one of our many accomplishments in the mission for a more sustainable campus and world. I am proud to be here today to celebrate with all of you.” She cited a number of Skidmore projects that promote sustainability—water bottle filling stations, the bike share program, the 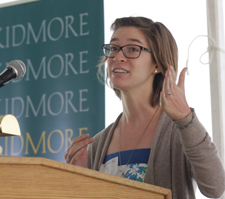 community garden. “Our campus is an organic classroom that inspires students to develop and implement every-day strategies to live more sustainably. It is the big projects—geothermal, hydroelectric, solar thermal and this array—that are the most impactful in the fight against climate change. I love seeing progress in those student initiatives AND I think it’s really exciting and powerful that we can say, ‘Look at that array! Look at what we did! Our school is investing in a future that we can be proud of.” 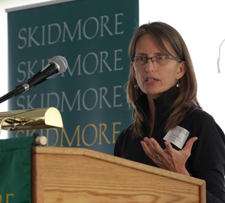 She noted Skidmore’s “unique situation as an institution of higher education. Because of this, “there is an inherent exponential power in the projects and initiatives we implement,” because of the potential to influence the 600 community members each year who transition from students to alumni. “We hope they take what they’ve learned about sustainability here and develop innovative sustainability solutions to make informed choices about sustainability wherever they might land.” Kellogg concluded, “Today I’m looking out at this community and I’m filled with hope for the future and gratitude to all of you who made this project possible.”

Skidmore donates additional protective gear to hospital
Skidmore College has donated thousands of gloves and other protective gear to Saratoga Hospital to boost the local community's capacity to deal with the COVID-19 outbreak.
END_OF_DOCUMENT_TOKEN_TO_BE_REPLACED
Mar 27 2020

With compassion, Skidmore responds to COVID-19
The Skidmore community has come together with kindness and determination in response to the global health emergency.
END_OF_DOCUMENT_TOKEN_TO_BE_REPLACED
Mar 20 2020
More News