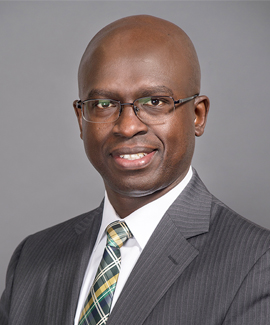 Skidmore President Philip Glotzbach says, “Martin is uniquely qualified to align the direction of Skidmore's communications and marketing efforts with the College's strategic goals and to effectively lead our dynamic team in the Office of Communications and Marketing.”

Mbugua brings more than 20 years of experience in journalism and higher education, most recently as assistant vice president for content and communications at Carnegie Mellon University, where he led online news, media relations, and other communications programs, and as director of media relations at Princeton University before that. His reporting and editing included the New York Daily News and Queens Chronicle, as well as the Daily Nation and Standard of Nairobi, Kenya.

He holds an MBA from the University of Delaware. He earned a bachelor’s in journalism and a master's in government, politics and international relations, both from St. John's University in New York City.

At Skidmore, leading a staff of 20 in the Office of Communications and Marketing, he says he is eager to "enhance the sterling reputation and visibility of one of the finest liberal arts colleges in the nation."

Mbugua succeeds Debra Townsend, who was interim VP from 2015 through June 2017. Glotzbach says, “I thank Debra for her dedicated work and for her many years of communications consulting with the College. I also commend communications and marketing directors Andy Camp, Luke Meyers and Diane O'Connor, who have provided interim leadership since July 1.”

Wrapping up a remarkable academic year
The Skidmore community is marking the end of an academic year that has been filled with unique arrangements but also fantastic achievements, special moments and exceptional creativity.
END_OF_DOCUMENT_TOKEN_TO_BE_REPLACED
May 4 2021
More News