Psychologist by day, supervillain by night 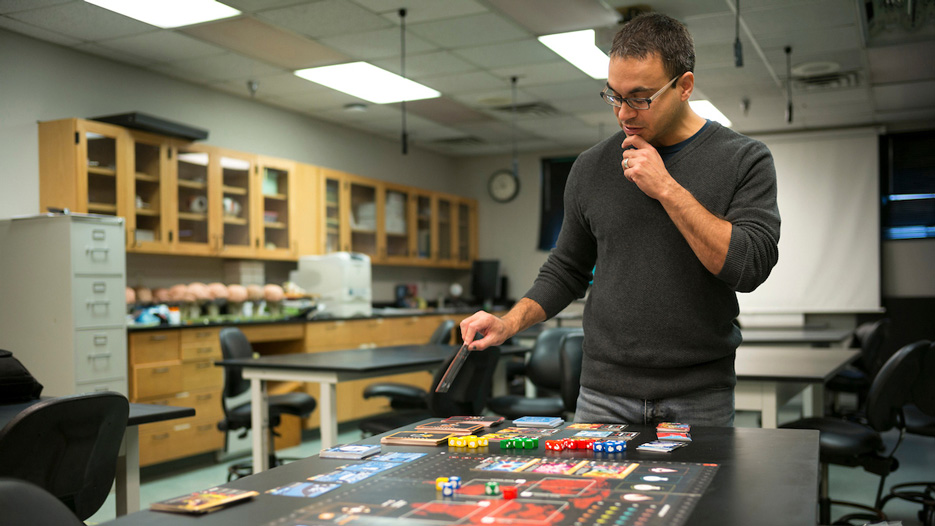 After he grades his exams, makes sure the lab rats are fed, and hangs up his lab coat, López sends his henchmen to build a floating fortress of doom in South America, plots the theft of a nuclear warhead in Europe, and devises sinister schemes to become a warlord in Asia.

López, an associate professor in Skidmore’s Neuroscience Program, is also a successful game developer. His second board game — “Maniacal,” a strategy game for aspiring supervillains — is set for release this spring.

At Skidmore, López, who teaches Introduction to Neuroscience, Hormones and Behavior, Physiological Psychology, and Psychopharmacology, bears little resemblance to Dr. Hominoid, the supervillain scientist, featured on the game cover. 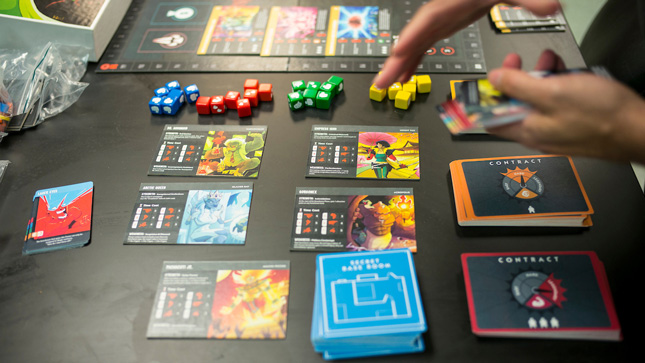 He acknowledges that his research interests — the role of the endocannabinoid system in regulation of social behavior, the neurochemical basis of sexual motivation and the use of cannabidiol in treatment of seizure disorders — also have little to do with game design.

“That’s kind of the point. I need something else to stimulate me and grow,” he said, adding that Skidmore offers an environment where creativity can flourish. “Liberal arts colleges like Skidmore, in contrast to pure research institutions, are unique in that they afford professors the time and space to delve into personal interests.

“Having a hobby makes us better people and better professors. We model what it means to be well-rounded.”

However, the Skidmore professor, who completed his undergraduate studies at Harvard and his doctorate at the University of California Santa Barbara, has lectured on game design and one day hopes to teach a course on the topic.

Featured on Kickstarter, “Maniacal” achieved its funding goal of $25,000 in just two days with support from more than 500 backers.

Adding to the appeal, Rob Guillory, an Eissner Award winner, known for his art on Image Comics' long-running series CHEW, illustrated the game, which features beasts, criminals, mercenaries and, of course, scientists as henchmen.

López’s 2015 fantasy steampunk war game, “Clockwork Wars,” sold out. López, describes that game as “Risk on steroids.” It features hybrid creatures fighting for territory with the help of armies, currency, espionage, sorcery and even science.

López says he designed “Maniacal” to be more family-friendly than “Clockwork Wars.” The new board game is “tongue-in-cheek with the villains being bumblers to a degree. Players will see humor in it.”

López’s daughter, Inara, 7, helped her father come up with some of the character names. López loves the idea that “board games can replace screen time” for kids. 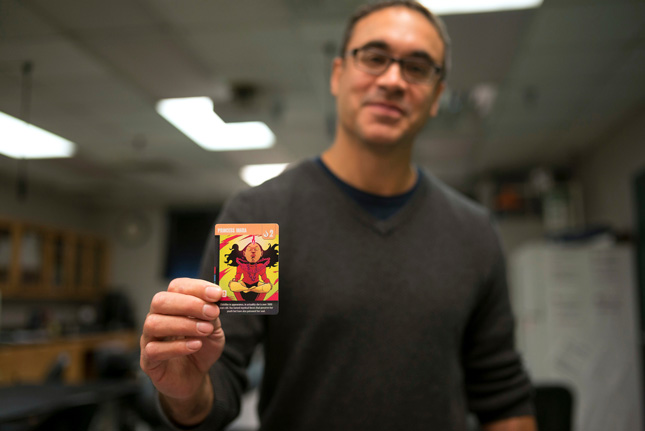 The character Princess Inara (named after López's 7-year-old daughter) has a childlike appearance thanks to mystical forces that preserve her youth but also poison her soul.

López grew up playing historically themed war games with his brother in Binghamton, N.Y., where his father also was a professor.  He likes the idea that he’s continuing a family tradition.

In the short term, López is looking forward to selling “Maniacal” and playing against Inara, who also is a character in the game. López acknowledges, however, that she may be a few years away from world domination.

An affirming moment of joy
With appeals for social justice and charges to change the world — without forgetting to pause for moments of joy — Skidmore College conferred 589 degrees to the Class of 2022 during the College’s 111th Commencement Exercises.
END_OF_DOCUMENT_TOKEN_TO_BE_REPLACED
May 23 2022

Your guide to Skidmore's academic regalia
At Commencement, Skidmore grads don colorful and symbolic regalia to celebrate their personal journeys and creative accomplishments. Here’s your guide to the story each piece tells.
END_OF_DOCUMENT_TOKEN_TO_BE_REPLACED
May 19 2022

Dear Class of 2022 ... Love, Skidmore
A tribute to the members of the Class of 2022 from some of the people – Skidmore faculty and staff – who witnessed and supported, their remarkable growth, perseverance, and success.
END_OF_DOCUMENT_TOKEN_TO_BE_REPLACED
May 18 2022
More News