‘Living in the story’: NPR’s Elissa Nadworny ’10 on reporting from Ukraine 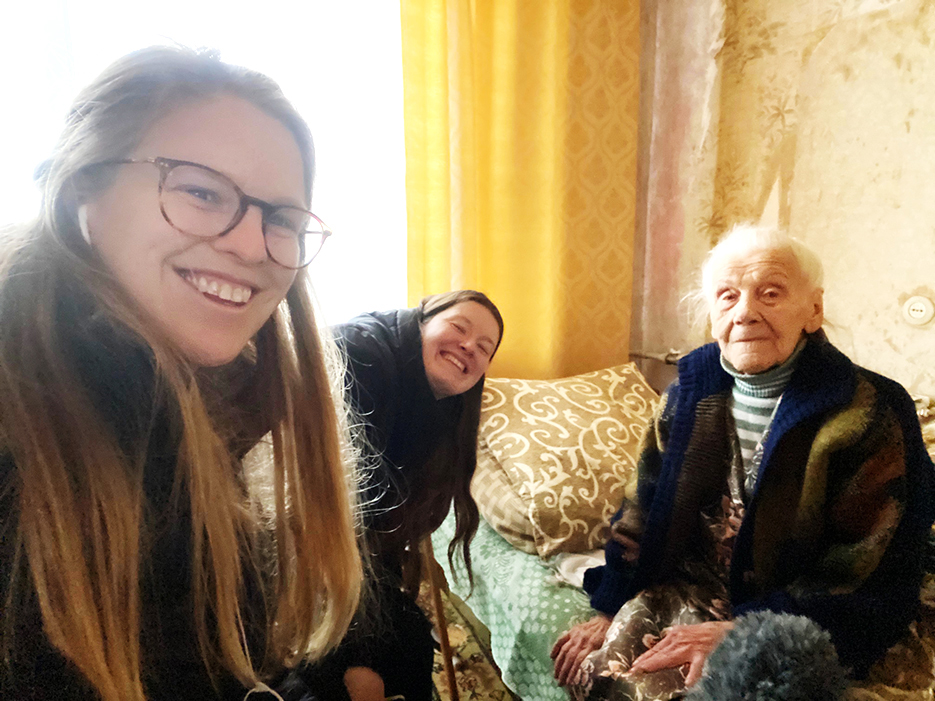 For National Public Radio's Elissa Nadworny ’10, “the most valuable skill as a reporter is to listen and spend time with people” — wherever they may be. Here, Nadworny (left) and fixer/translator Olena Lysenko interview Nadiia Yerkimovych (right) for a story about elderly residents of Kyiv who stayed behind.
by James Helicke

NPR Correspondent Elissa Nadworny ’10, who pursued a self-determined major in documentary filmmaking at Skidmore, recently returned from a month-long assignment in Ukraine, where her reports ranged from analysis of evolving Russian military strategy to first-hand accounts of the human impact of the conflict.

The recipient of Skidmore’s Joseph C. Palamountain Award for Young Alumni Achievement and multiple national awards for her journalism, Nadworny answered questions about her experience reporting from Ukraine. She discusses her travels in Ukraine, which took her from the western city of Lviv to the capital Kyiv; the challenges she and other journalists face reporting from a war zone; and the ways that her Skidmore education continue to shape her approach to journalism.

Covering a war seems to be quite different from your usual work on NPR’s education beat. Was that a difficult transition?

It has actually not been that different. At the core of most of my stories are people navigating the world they find themselves in — and so that’s really the same wherever you point your microphone. I do have a lot of experience talking with families and children, so that served me well in my reporting in Ukraine.

I think the most valuable skill as a reporter is to listen and spend time with people. Even with all the news — nightly attacks, the big-picture military strategy — I tried to find as much humanity as I could. 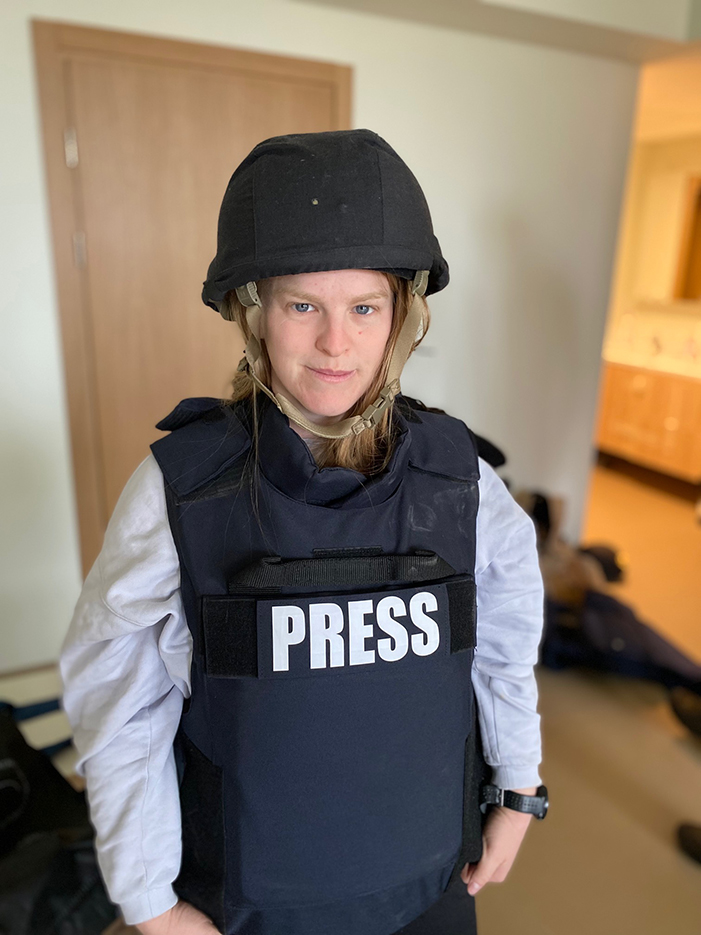 Elissa Nadworny prepares for a reporting trip to Kyiv, which was under threat from Russian forces.

What’s everyday life like as a reporter in Ukraine?

When I was in Ukraine we were working looong days. You’re setting things up, making phone calls, arranging with drivers, fixers, and translators, going out and talking with people, and getting tape (because we’re making radio). Then, you’re coming back and sitting at the computer and writing and going through tape with a translator to pull the right moments (usually in Ukrainian or Russian). Then you’re doing the production … or getting ready to go live on one of the NPR shows like "Morning Edition" or "All Things Considered."

And you’re doing all this when you’re living in the story — so your life is constricted in many ways. There are air raid sirens, sounds of explosions, military everywhere, checkpoints where you need to show a passport and potentially have your car searched. There’s also a curfew, so you have to make sure you get food early. In Kyiv, many places were closed, so you’re at the hotel or you’re in the van or out reporting — and you still have to remember to eat and drink water! 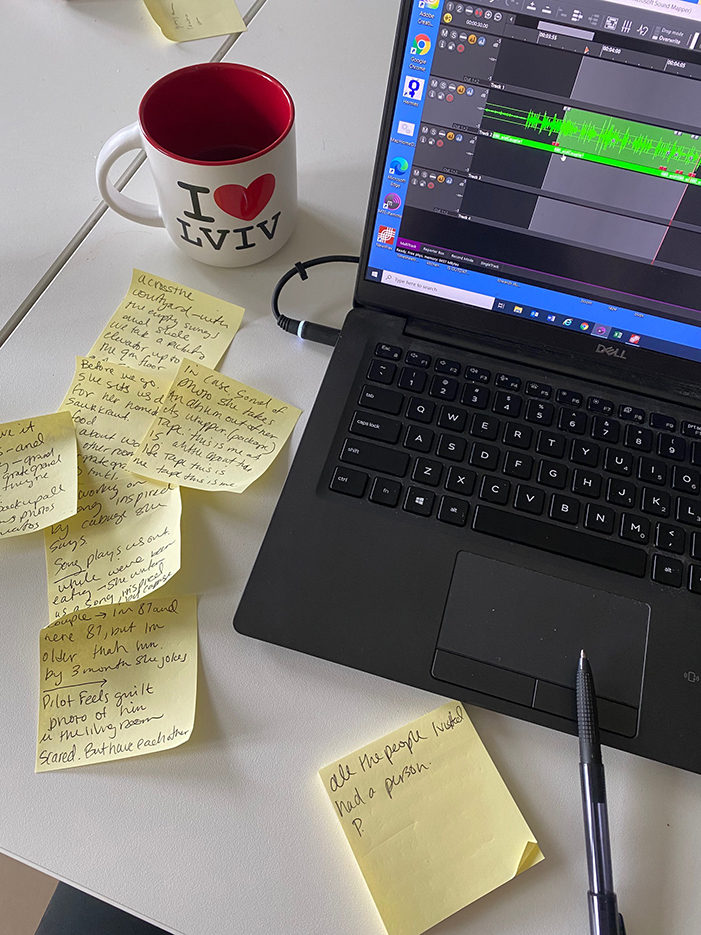 Nadworny put in lots of long days while reporting from Ukraine. Here, she prepares a story while working in Lviv.

Given all the challenges you’ve described, how were you able to put together all impressive reports that you did while in Ukraine? (Those stories ranged from accounts of elderly residents who could not leave the country to a story about a maternity hospital operating during the conflict, among many others.)

I guess I’ll first say that we were working many, many hours to do all that. Especially with the time difference, which was either six or seven hours ahead, you’re just getting very little sleep. Add in air raid sirens at night, and it’s a lot. But the reality is you’re in THE place where the story is, and just that fact means there are stories everywhere you look.

Our own movement was — and is — a major challenge, especially with the way this war is playing out because with shelling and missile attacks you don’t always know where the danger is. Just recently, there was a missile attack near the train station in Lviv, a place I visited frequently and took trains to, and from. Every story is a conversation with our security team on the ground and back at headquarters in Washington.

What skills or lessons from Skidmore do you draw on in your reporting? What advice would you give to Skidmore students interested in pursuing a career in journalism?

I learned to be curious at Skidmore, and that’s a skill that serves me in everything that I do.

I think no matter what your major is, you can be a storyteller. And sometimes we’re waiting for the right job or the right employer to do the work we want to do — to tell the stories we want to tell — and I just don’t think you have to wait for that.

What should members of the Skidmore community know about Ukraine that they may not know already?

Ukraine is a fascinating place with a really interesting history and so many different influences because of that history. There are parts that feel so much like Europe — and then the Soviet influence is everywhere, too.

One thing that might surprise people: It’s an incredibly modern and tech-savvy country. On public transport — metro or tram — you can pay by scanning your phone. Even during war, the postal service is still delivering and is far more efficient than USPS!

Learn more about NPR's Elissa Nadworny. You also may be interested in Skidmore’s John B. Moore Documentary Studies Collaborative (MDOCS) and the Media and Film Studies Program.

An affirming moment of joy
With appeals for social justice and charges to change the world — without forgetting to pause for moments of joy — Skidmore College conferred 589 degrees to the Class of 2022 during the College’s 111th Commencement Exercises.
END_OF_DOCUMENT_TOKEN_TO_BE_REPLACED
May 23 2022

Your guide to Skidmore's academic regalia
At Commencement, Skidmore grads don colorful and symbolic regalia to celebrate their personal journeys and creative accomplishments. Here’s your guide to the story each piece tells.
END_OF_DOCUMENT_TOKEN_TO_BE_REPLACED
May 19 2022

Dear Class of 2022 ... Love, Skidmore
A tribute to the members of the Class of 2022 from some of the people – Skidmore faculty and staff – who witnessed and supported, their remarkable growth, perseverance, and success.
END_OF_DOCUMENT_TOKEN_TO_BE_REPLACED
May 18 2022
More News