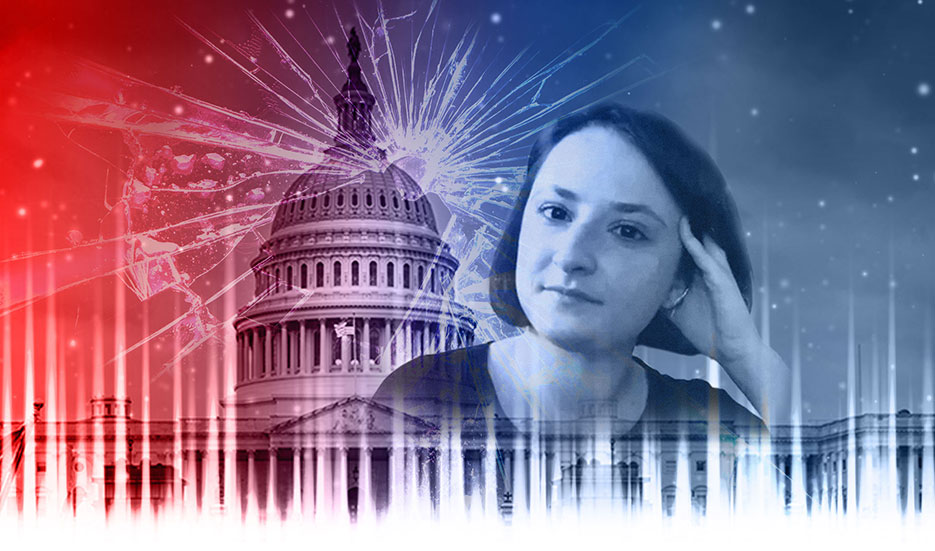 Ariel Plotnick ’15, a Skidmore English and history major, is an audio producer for The Washington Post and a recent winner, along with colleagues, of a Pulitzer Prize for Public Service and George Polk Award for editing and producing audio stories about the Jan. 6 insurrection.

The team scoured thousands of documents and many hours of footage of interviews to produce the investigative series “The Attack.” It covers not only the insurrection, but also the actions made by politicians and others that led to the attack, the events that followed, and the attack’s reverberations on American politics.

In its citation, the Pulitzer Board called the series a “compellingly told and vividly presented account of the assault on Washington on Jan. 6, 2021, providing the public with a thorough and unflinching understanding of one of the nation's darkest days.”

As an audio producer, Plotnick puts together and edits feature stories for The Post’s flagship daily news podcast, “Post Reports,” and other projects for the newsroom.

At Skidmore, Plotnick served as a general manager of WSPN, the College’s student-run radio station. She was recently interviewed by current student and aspiring radio journalist Aaron Shellow-Lavine ’23.

Q. Thanks so much for being here, Ariel. Could you give us a brief career history from Skidmore to now?

My time between Skidmore and The Post was a winding road. I was an English and history major interested in journalism, so I kind of carved out my experience, studying what I could and being a part of WSPN.

While I was an undergrad, I interned at WHYY in Philadelphia and — thanks to a Skidmore Post-Grad Award — interned at the Third Coast International Audio Festival, which is like a radio arts organization that promotes narrative audio stories.

By then, I was listening to a lot of great radio and audio stories, and I decided that I wanted to learn how to make them. I was accepted into UC Berkeley's Graduate School of Journalism and was there from 2016 to 2018.

In graduate school, I concentrated on audio reporting and expanding my knowledge of journalism. I began to freelance as well, making stories for local and national NPR stations. All of that helped me get an internship for “Marketplace” and a position as a temporary producer for the NPR station WAMU in Washington, D.C.

Q. What clubs and organizations were you involved in at Skidmore? What was your time at WSPN like?

When I was general manager of WSPN, it was sort of a funny fit, because I love music and I love the station, but I wanted to get people to make audio narrative stories. I had a show where I was sort of trying to do that. I was trying to record people and put stories together. In hindsight, it was sort of this early defining moment of carving my own path with the resources Skidmore provided.

I was also in Speaker's Bureau, which was also a valuable experience.

Q. How has Skidmore’s belief that Creative Thought Matters stuck with you throughout your professional career? What has that phrase meant to you?

My post-grad internship with Third Coast International Audio Festival was a big CTM moment. Skidmore gave me the opportunity to apply for this grant at 21 years old and actually gave it to me. It was a great example of Skidmore being like, “You’re passionate about this, and we want to help you achieve that.”

Skidmore’s willingness to run with what students are interested in made me feel supported. Even when I didn’t have a clear academic path, Skidmore was behind me, supporting the idea that it was a real career that I could try to achieve.

Today, I think so much of being an audio producer or a journalist is about creative thought — being able to be holistic, flexible, and creative about the type of work you're making.

Journalism, especially audio producing, is very collaborative. It's really a team effort. Bringing the interdisciplinary ways of thinking I learned in my undergraduate studies to work has completely helped me thrive and enjoy even more of my job.

Q. You were a part of the team at The Washington Post that produced award-winning coverage of the Jan. 6 insurrection. What was it like?

My answer is twofold because I had both immediate work to do and longer-term investigative reporting.

A big part of my job on “Post Reports” is daily news, so the first part of my experience covering Jan. 6 was about very quickly making stories that would help our listeners understand the chaos of what had just happened and the implications of this event immediately after it all went down.

A part of daily news-making is exciting and very mission-driven: I’m always thinking, “What questions do I have?” “What questions do my friends and family have?” “How can we do a public service and give people the information they need to understand this crazy moment in context?”

The second part of my answer is that I was involved in the project management and editing of the audio for “The Attack,” The Post's investigation into what happened before, during, and after Jan. 6.

I got involved in that a couple of months after it happened. As a big, long-form, investigative story, it provided a different lens for coverage. The team was investigating what had happened since then and what the long-term ramifications were and will be. Together, we were asking, “What are the stories that we as audio producers, can bring to people?” and “What stories do people not know?”

READ AND LISTEN TO THE THREE-PART SERIES, "THE ATTACK"

When a big event happens, sometimes it can feel like “Don't we know everything already? Haven't we covered this to the point of no new information?” But the investigation was to show people there's so much more to know.

Covering something a little removed from the daily news gave us the space and time to think about the best format to present the information. For us, audio was the way to help people intimately understand and was really exciting for me.

The two parts together are the regular balance of my job — the adrenaline and rush of getting something out on a daily deadline while also having long-term projects to really sink your teeth into and think deeply about narrative and form.

Q. What does coverage look like right now with the Jan. 6 hearings?

I produced an episode recently that looked at the Jan. 6 hearings through the lens of the “Big Lie”— the idea that Donald Trump was spreading this lie that the election was stolen — as it was a big focus of one of the sessions.

Our story looked at how the “Big Lie” continues to live on — how candidates running in primaries for the midterms this fall also espouse it.

What I think is interesting about the hearings is that they’re a lens for how Jan. 6 impacted our democracy and voting system. It’s not just that it had immediate consequences in the days and weeks after Jan. 6, but it continues to affect our country in ways big and small.

The results of the hearings remain to be seen. Regardless, looking at them and our evolving understanding of the insurrection repeatedly reveal new understandings about politics in our country.

Q. I’m interning for the first time in a newsroom this summer for our local NPR station, WAMC. There’s always something good happening, but news these days is so often depressing and challenging. How do you keep a clear head and perspective?

I'm very fortunate to work in an extremely collaborative, team-driven environment. We all understand and respect that working in news is intense, hard, and a real grind.

Having people around me who are willing to pick up an assignment if I’m too buried or if I have to take the afternoon to go to the doctor or go visit family or just live my life as a person, has been amazing. My colleagues understand that we're not just journalists, we're also people with relationships and lives outside of work. That is the way that I have found some comfort in some of the harder things we cover. That said, burnout — especially as a journalist — is real. Not every team is perfect, but if you can seek out the ones that get that, you’ll be better positioned to take care of yourself and be taken care of.

Q. What reporting do you think should be prioritized right now?

The story right now is access to abortion care. It’s getting a lot of attention, and it’s going to need it going forward. At this point, who knows what's going to happen later in the year. Midterms are coming up, but this is the story of the year. And it’s the bigger trends and subtopics, too, of limiting bodily autonomy, gender-affirming care, and LGBTQIA rights.

Ha! You should go to the racetrack and see a horse race; it’s a worthwhile experience while you’re in Saratoga. You also have got to get apple cider doughnuts from an apple orchard.

You have to go to Hattie’s for the fried chicken. Actually, that’s my No. 1 must-do. Putnam Market sandwiches are also a must. I feel like all of my recommendations are food-related. I could talk about Saratoga food forever.

Q. If you could give your Skidmore-era self or another Skidmore student advice, what would it be?

The advice that I would give myself — and something that is applicable to a lot of people — is to remember that your curiosity is special and important.

Curiosity is my biggest asset. It’s what drives me. The instinctual, inherent, human nature that makes us wonder about the world and each other is so important to nurture.

It's easy to say, “I don't have anything interesting about me. I'm curious about the same things everyone else is curious about.” But that's not true. People are interested in all sorts of things. Foster that and remind yourself that a little curiosity will always help you.

This interview has been edited for clarity and length.

A front-row seat to history in London
Skidmore London First-Year Experience students find themselves at the center of a remarkable moment in history following the death of Queen Elizabeth II and accession of King Charles III.
END_OF_DOCUMENT_TOKEN_TO_BE_REPLACED
Sep 16 2022

The start of a new century
Skidmore College is marking its College Centennial with a yearlong celebration of its history and reflections on the journey ahead.
END_OF_DOCUMENT_TOKEN_TO_BE_REPLACED
Sep 14 2022