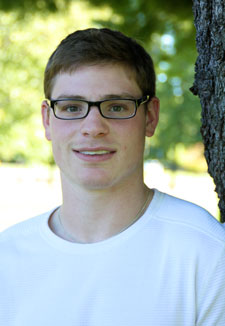 Skidmore senior Tim Brodsky, an award-winning scientist, says that research is not only compelling, but also “good training for many things.”

The Auburn, Maine, resident has been engaged since the beginning of his Skidmore career on learning more about potential treatments for obesity. With Professor T.H. Reynolds of the Health and Exercise Sciences Department, Brodsky has narrowed and refined his research, which currently focuses on whether the hormone leptin plays a role in MnTBAP-mediated weight loss.

MnTBAP is a synthetic antioxidant that has long interested Skidmore scientists. In 2007 alumnus Jon Brestoff ’08 demonstrated that MnTBAP increases insulin sensitivity and also leads to significant weight loss in laboratory mice. Brestoff, now a Skidmore trustee and student at the University of Pennsylvania School of Medicine, worked collaboratively with Reynolds. Brestoff and Reynolds have recently been issued a patent for the use of MnTBAP as an anti-obesity compound.

Says Reynolds, “For the past several years my lab has been working to figure out how MnTBAP and other antioxidants cause weight loss.” Since 2009, Brodsky and Reynolds have expanded on the research completed by Brestoff and Reynolds to zero in on factors that promote weight loss.

Brodsky earned affirmation for his efforts when he received two awards from the American Physiological Society:  an Outstanding Abstract Award, presented to students who are first authors on an abstract; and the Bruce Excellence in Undergraduate Research Award, a highly competitive recognition named for the late David S. Bruce, who was known for encouraging and supporting student researchers. The awards were presented at Experimental Biology 2013 in Boston earlier this year.

Candidates for the Bruce Award came from the pool of student researchers who were in competition for the Outstanding Abstract Award. Brodsky said the process enabled him to discuss his research in general and very specific terms with scholars attending the international conference.

Brodsky developed as a researcher over several years, including the summers of 2012 and 2013, when he remained on campus. While most of his attention was directed toward the lab, he also worked as a coach for the Saratoga-Schenectady Sharks, a USA swim club for children ranging in age from 5 years to high school. He is a member of the Skidmore varsity swim team, specializing in the freestyle.

Now in his final year at Skidmore, Brodsky continues as collaborative partner with Reynolds while working on his senior thesis and applying to graduate school, where he hopes to earn advanced degrees in exercise physiology and continue his research on metabolism.

Reynolds confirms this is a good course of action. “Tim is an outstanding young scientist. Seldom do undergraduates have the ability to interpret the data they collect and design the next study. Tim has done just that.”

Says Brodsky, “I enjoy the process as much as the science.”